“Not a day, not a moment passes, when the memory of my beloved Max is not on my mind and in my heart,” says father of California native. 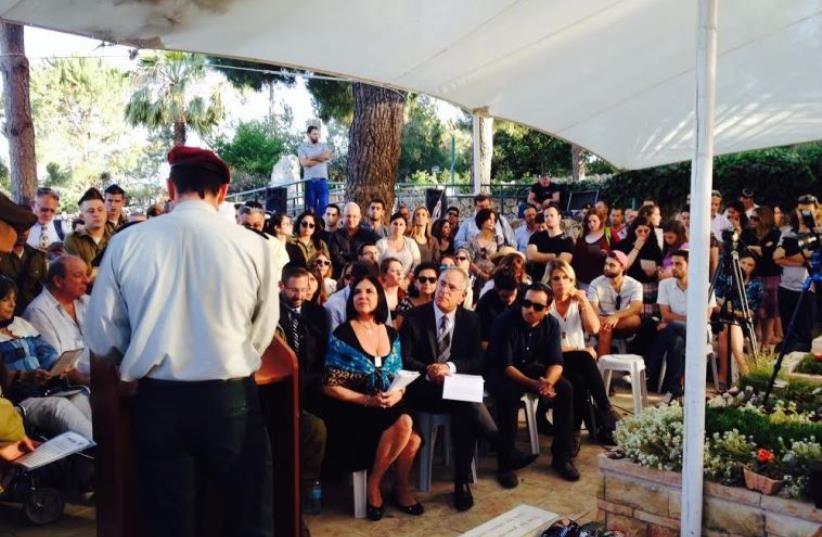 He parents of fallen Lone Soldier St.- Sgt. Max Steinberg, Evie and Stuart, sit at his one-year memorial on Mount Herzl on Thursday evening
(photo credit: DANIEL K. EISENBUD)
Advertisement
“Live for yourself and you will live in vain. Live for others, and you will live again.” Lone Soldier St.- Sgt. Max Steinberg, 24, killed last summer in Operation Protective Edge, lived by these words, penned by his hero, Bob Marley.At his one-year memorial on Mount Herzl Thursday evening, attended by hundreds – including his Golani Brigade comrades, parents and brother and sister – these words adorned the California native’s gravesite, along with dozens of IDF patches and vibrant yellow and red flowers.“Not a day, not a moment passes, when the memory of my beloved Max is not on my mind and in my heart,” said his father, Stuart Steinberg, as he memorialized his eldest child.“This past year has been filled with so much emotion, that it’s difficult for me to put into words the total impact Max’s death has had on my family and me.”Max Steinberg visited Israel for the first time on a Taglit Birthright trip with his brother and sister in June of 2012. The experience had such a profound impact on his “understanding of what it means to be Jewish,” his father said, that he “fell in love with the country, and with the people.”“He experienced a special connection with Israel, and he identified his calling to enlist in the IDF,” Stuart said. “Max understood the volatility of the region, and the challenges Israel faces every single day.”“Max knew that he could not consider making Israel his home without doing his part to defend her,” his father continued.“Following his heart,” Stuart recounted, Max soon returned to Israel, enlisted in the IDF, began to learn Hebrew, and completed advanced training with the Golani Brigade in November of 2013.“Max was only 5 foot 3 and 135 pounds, but he was remarkably strong, both mentally and physically,” he said. “He more than made up for his small stature with his perseverance, his passion, and his dedication to be the best man he could be.”Noting that his son distinguished himself militarily as a sharp shooter, Steinberg added that it was “his smile, his sense of humor, and his free spirit that made Max special.”“His most admired characteristics included his love, acceptance and respect for all people,” his father said. “Max cherished and embraced his fellow soldiers – his brothers and sisters – in his brigade and thought of them as family.”Following his death, one of the two survivors who were with Max, recounted to his father that before he was killed, he told him, “I love you brother. I would take a bullet for you.”“That was the essence of my son,” Stuart said. “I think that is the essence of all you guys,” he added, addressing the dozens of Golani soldiers at the memorial.“Upon Max’s death, our family made the extremely difficult decision to lay Max to rest here on Mount Herzl,” he continued. “And because we believe he should be buried among the other brave soldiers that sacrificed their lives for Israel.”Max’s mother, Evie, read the words her son posted on his Facebook page after proudly completing his IDF training.“I have come so far from where I was less than one year ago,” she read.“It was far from easy – I left everything that I knew, pushed myself mentally and physically, walked over 100 miles in less than two weeks, and after eight months I completed advanced training with a 70-plus kilometer journey to earn my beret.”“I’m proud to say that I’m officially a Golacheck, and feel accomplished,” she added.Reciting the Marley quote on his tombstone, his mother then spoke directly to her son.“Max, you certainly didn’t die in vain,” she said. “Thirty thousand people came to honor and show their love and respect for you. Israel and the Jewish people have embraced you and our family.”“You lived for others by sacrificing your life to defend the State of Israel and all its people,” she continued. “You are living in the hearts of millions of people in Israel and throughout the world.”Indeed, Evie noted that not a day has passed since her son’s death that she, his father, and brother and sister, have not heard from people around the world offering their condolences, love and support.“I still cannot believe and accept that you are no longer with us in body, but you will forever be in my heart,” she said.Former Yesh Atid MK Dov Lipman, who has worked closely with the Steinberg’s following their son’s death, also honored the fallen soldier and his family.“I want to thank you for turning your loss into a source of inspiration to all of us,” Lipman said, as he addressed his parents, brother and sister. “You speak about Max wherever and whenever possible, and by doing so, his spirit is alive and well.”Lipman added that the family’s undertaking of creating a torah to honor Max’s memory, which will be completed on Sunday, represents “the unity of all the Jewish people” and “captures the unity which Max has brought to the Jewish people.” Moreover, Lipman said that Max’s inspirational legacy has been evident every time he has visited his grave over the past year.“I have never visited Max’s grave without seeing a group here,” he said.“Hundreds of thousands of youth come here and are inspired to live their lives like Max – to take responsibility and live for others, and to enjoy life while doing so.”