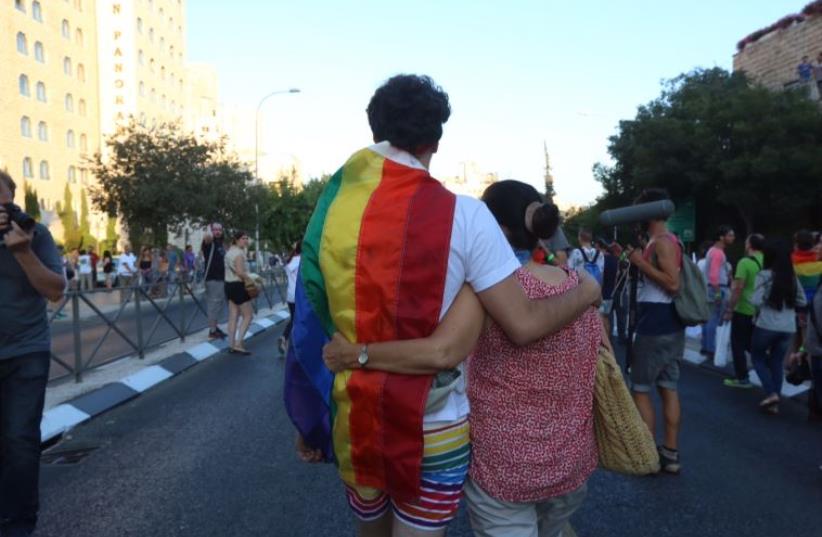 Stabbing at J'lem gay-pride parade
(photo credit: MARC ISRAEL SELLEM/THE JERUSALEM POST)
Advertisement
One year after 16-year-old Shira Banki was murdered by a religious zealot during the Jerusalem Gay Pride Parade, police announced unprecedented security measures for Thursday’s annual LGBT march through downtown Jerusalem.Expecting a record turnout following last year’s deadly hate crime – committed by Yishai Schlissel, who was released from prison days before for carrying out a similar attack 10 years earlier – police spokeswoman Luba Samri said multiple units are leaving nothing to chance.Schlissel, who stabbed Banki and six others, expressed no remorse for his crime. He was sentenced to life imprisonment last month.At his sentencing, the court also took police to task for not stopping a man who publicized his intent to attack participants of the parade.“The unconscionable ease with which the accused managed to penetrate and reach the marchers so that he could perpetrate his scheme until he was arrested, is inconceivable,” the court said.On Tuesday, Samri said “Hundreds of police officers, Border Guard officers, Undercover officers, reinforcements and volunteers, led by Jerusalem District Police Commander Yoram Halevy, will be deployed to oversee the procession.”“They will also monitor the surrounding streets to keep the participants safe, maintain public order, and ensure the route of the march remains smooth,” Samri said.Samri noted that police will conduct security checks at the entrance to the parade in Liberty Bell Park.“No one will be allowed entry to the premises of the parade with weapons of any kind,” she said, adding that once the march commences, no one will be permitted to enter or leave the route without security clearance.“Undercover and uniformed police officers will act firmly against anyone who tries to violate the order and the proper course of the parade,” Samri added.During a Tuesday press conference at Open House Jerusalem, a LGBT rights and advocacy organization, deputy director Tom Canning said the group has worked closely with police to plan security for Thursday’s parade.Noting that Open House is one of the only resources and shelters for the capital’s largely marginalized gay and transgender population, Canning said Banki’s murder had a profound impact on all members of the LGBT community.“Last year after the tragic events of the Jerusalem Gay Pride Parade, the community faced a very difficult situation in terms of the trauma that we experienced, and the bubble of our sense of security, which was burst,” he said.“Everyone who was there and was nearly victimized themselves, for us, they are still victims. They may not have physical wounds, but they do have emotional wounds that they will carry for the rest of their lives.”Canning said Open House led the public response to the rampage, including outreach to religious communities, educational and tolerance initiatives, and suggestions to improve legislation to ensure it does not happen again.“We did this to help people understand that we have institutional problems dealing with homophobia in Israel,” he said. “There is no clear direction in which the Ministries of Education, Interior, Defense and many others, have implemented in order to create real change within Israeli society.”Despite having worked closely with several government leaders, and making some inroads over the past year, Canning said incitement against the parade continues within extremist groups in the religious community.Indeed, he cited a recent op-ed penned in an ultra-Orthodox magazine by Benzi Gopstein, head of the radical right-wing group Lehava, which protests the parade every year, to illustrate the dangers that remain.“He called the LGBT community the bottom of the bucket, the filth of society – and called in a very clever and hidden way for violence against the Jerusalem Pride Parade,” he said.“He made a Biblical reference to the Torah portion during the week of the parade, in which there is a story where two murders are committed due to religious fanaticism.”Moreover, last year, Canning said Lehava plastered posters throughout Jerusalem exonerating Schlissel for his crimes.Although Jerusalem Open House submitted a formal complaint to police about Gopstein’s ongoing incitement, Canning said Lehava will still hold a protest near the parade route.“They are going to be separated from us, but they are going to be right across the street – as usual, inciting violence and spreading homophobia,” he said.“Of course we believe that everyone has the right to their opinions in Israeli society. What we are coming out against is calls for violence, because we see that these calls lead to actions by individuals.”