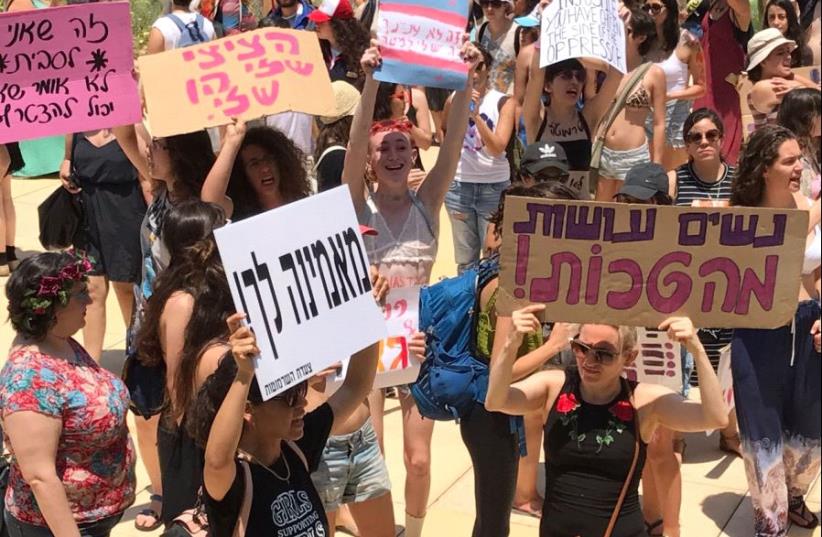 People take part in a "SlutWalk" protest, during which several hundred participants march through the centre of Tel Aviv, May 12, 2017.
(photo credit: AVSHALOM SASSONI/MAARIV)
Advertisement
Hundreds of Israeli feminist activists flocked to the capital on Friday to participate in the annual SlutWalk held in Jerusalem for the sixth consecutive year in protest against rape culture. The protesters decried a common notion in society that women are at fault for the sexual assault or harassment they undergo because of their provocative behavior and/or the sexually appealing attire they choose to wear.The hundreds gathered at the Davidka Square, not far from Jerusalem's Machne Yehuda market, and from there they marched to Heleni HaMalka Street, where a rally was held. As is the common tradition in SlutWalks across the world, most demonstrators were clad in revealing outfits to challenge the claim that women who wear such clothes are calling for potential attackers to harass them. The activists carried posters that displayed strongly-worded slogans speaking out against rape and sexual assault. The majority of the messages were written in bold letters both in English and in Hebrew, making statements such as: "No means no," "Don't tell us how to dress, tell men not to rape," "My body is solely mine" and others. The protesters explained that their intention was to call on public organizations and state-run institutions to take responsibility for the high assault rates in Israel and to act immediately to allocate resources to support women that have undergone sexual assault, to reinforce legislation and to increase punishment sexual offenders must face. They added that they wished to protest against the forgiving stance the justice system and the police have towards sexual offenders, which in their opinion leaves women in the country unprotected. The organizers of the rally told Hebrew media that "women are never guilty for the sexual assault they go through, and blaming them is but a social excuse that is meant to pass the responsibility on to them." Some of the participants pointed out that the SlutWalk in Jerusalem was especially significant due to the large number of sexual assaults and rape cases that are reported in the capital. They said that despite the fact that a similar protest was held several weeks ago in Tel Aviv, it was important to reinforce the message that rape culture will not be tolerated in all of Israel and not just in Tel Aviv, which many consider to be a secular hub of liberalism and acceptance.  The worldwide SlutWalk movement began in 2011 after a Toronto policeman suggested that women could avoid sexual assault by not dressing like a "slut."