New campaign by Amona families is part of a number of right-wing initiatives designed to pressure Netanyahu to stand against cautionary warnings on settlement building by the Trump Administration. 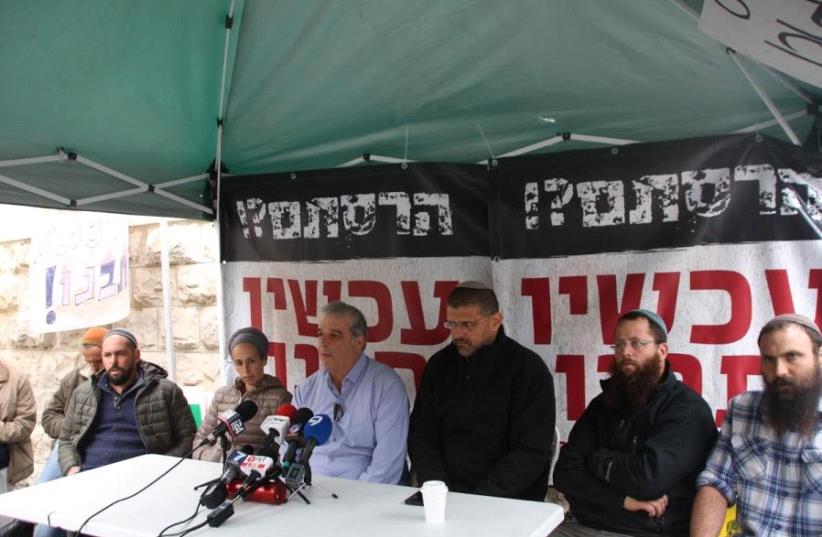 Settlers start hunger strike to push Netanyahu to build new settlement
(photo credit: TOVAH LAZAROFF)
Advertisement
Six evacuees from the Amona outpost in the West Bank began a hunger strike Thursday to pressure Prime Minister Benjamin Netanyahu to keep his pledge to build them a new settlement as soon as possible.“Today we are starting a hunger strike,” Amona evacuee Avihai Boaron said at a press conference held under a small tent on the sidewalk outside the Prime Minister’s Residence in Jerusalem.
Elad Ziv, Amona resident going on hunger strike‏ (credit: TOVAH LAZAROFF)
Hanging in back of him was a large plastic Hebrew banner that said, “You destroyed, now you must build.”The new campaign by the Amona families is part of a number of right-wing initiatives designed to pressure Netanyahu to stand against the cautionary warnings by the Trump Administration to restrain settlement activity.Among the diplomatic red lines they want Netanyahu to cross, is the creation of a new settlement. It’s a move that goes against past Israeli obligations to the United States.Boaron said the Prime Minister’s Office promised two weeks ago that Netanyahu planned to keep his promise, but they have heard nothing since his return from Australia earlier this week, in spite of repeated efforts to make contact.“We are completely disconnected. If the Prime Minister and his people want to contact us, they know where to find us. We are not far away,” he said.To move forward, he said, the government must formally vote to approve the new community, without that nothing can happen, Boaron said.The PMO said in response that Netanyahu intended to fulfill his promise to the Amona residents. But Netanyahu has also indicated to reporters that this is not something that can happen now.In a short speech, Boaron listed details of pledges Netanyahu made to the 40 families that once lived in Amona to build a new settlement for them.“Today we are asking Netanyahu, ‘Will you refuse to fulfill the commitment you signed with your own hand?’ [Is] an agreement... not worth the paper it is written on?” He sat bundled in a black fleece jacket to ward off the cold, wearing glasses and a skull cap.Boaron explained that, prior to last month’s forced eviction and demolition, he and other Amona representatives met in the PMO with the prime minister and his staff.They looked for ways to mutually agree on how to respond to the High Court of Justice ruling that the homes must be demolished because they were built without permits on private Palestinian property.It was determined that the homes could be relocated to another abandoned property lot a short distance away on the same hilltop. But they were concerned that the option was legally problematic and so they asked for an alternative plan. “What if it won’t happen,” Boaron recalled them asking.“In the pre-dawn hours in Netanyahu’s office with [Education Minister and Bayit Yehudi party head Naftali] Bennett a promise was made to create a new settlement,” he recalled.“Netanyahu emphasized to us that for the last 25 years a new settlement had not been created in Judea and Samaria.” Netanyahu then told them, “You, the residents of Amona will be the first to make this happen,” Boaron said.After the attorney-general authorized the agreement the next day, it was signed in the name of Netanyahu by his chief of staff Yoav Horowitz and his director-general Eli Gruner making it, in Boaron’s view, a legally binding agreement that would likely stand up in court.On the day security forces evacuated Amona, Netanyahu publicly made the same pledge at the University of Ariel, he said, noting that one month later, nothing has happened.“We have been tossed away as if we were dogs,” he said.“And you, Mr. Netanyahu, where are you, what happened to your promise, your signature, your word?,” Boaron said.“They told us that [US President Donald] Trump just entered [office]. Then they said, ‘Let’s wait until we meet with him.’ After the [February 15] meeting [with Netanyahu and Trump] they said, ‘It is not simple.’ In reality they waited for us to break and to back away from our request. But we do not have any intention of doing that.”Boaron noted that Netanyahu also promised that settler homes would not be uprooted on his watch, but the number of forced evacuations is growing.He listed the major evacuations of the last eight years in which Netanyahu has been in office, including the 2012 demolitions of the Migron outpost, 30 apartment units in the Ulpana outpost outside the Beit El settlement and nine stone homes in Ofra on Tuesday and Wednesday.Many of the initial steps to create the Amona outpost were taken during Netanyahu’s first term as prime minister from 1996 to 1999. At that time, Boaron said, they were led to believe that Amona would eventually be legalized.Protesters plan to be on site every day the hunger strike continues, during which strikers will drink liquids but refrain from food.Evacuee Tamara Nizri said that there were no other options here.She recalled how she had said to her girls when they were out, “let’s go home,” referring to their two room in the field school in Ofra.“What does that mean,” her daughters asked, stating, “We don’t have a home.”Boaron added, “Today we are saying, ‘enough,’. We want to return to normal live as quickly as possible.”Herb Keinon contributed to this report.