'I begged her to keep breathing and not to stop' 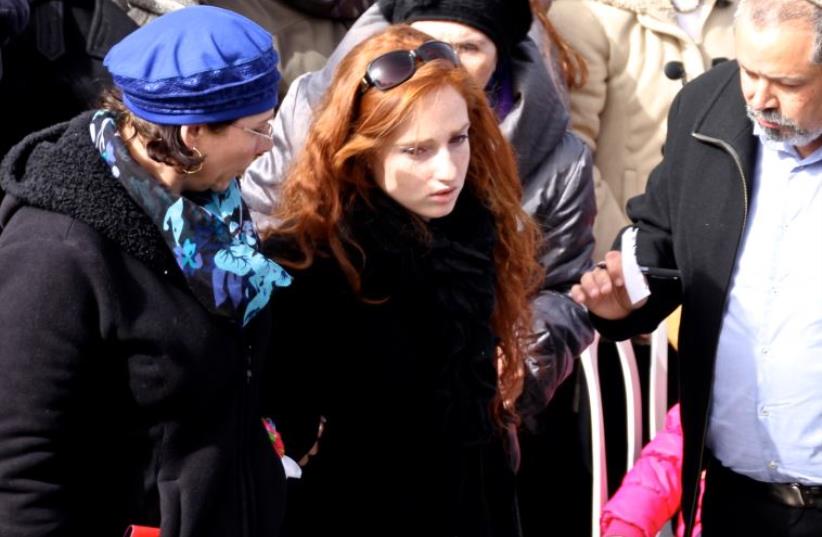 Renana Meir, daughter of slain terror victim Dafna Meir, attends her mother's funeral in Jerusalem - Jan., 2016
(photo credit: TOVAH LAZAROFF)
Advertisement
As Dafna Meir, 38, lay on the floor of her home with a knife stuck inside her body, her daughter urged her to stay alive.“I begged her to keep breathing and not to stop,” Renana, 17, recalled.She and her father, Natan, spoke to Channel 2 about the attack in which a 15-year old terrorist, Murad Adeis, stabbed Dafna just inside the doorway of her home in the Otniel settlement in the West Bank’s South Hebron Hills.He came to the door at 5:21 p.m. on Sunday while Renana lay on her parents’ bed talking on her phone. Suddenly, she heard her mother scream. At first she thought something normal had frightened her, like a cockroach.“But the screams grew louder and they did not stop,” the redhaired teenager said.Afraid that something was wrong she ran up the stairs from the bottom floor to the living room, just as Adeis threw her mother on the floor. “She was still struggling against the terrorist,” Renana said.The knife that the terrorist used to stab her mother was in her body. Two of her siblings were in the house. She called out to them not to enter the living room.“I saw a lot of blood. I saw him trying to take out the knife. Afterward, I understood that he had wanted to hurt us as well,” recalled Renana. “My mother fought the terrorist. She didn’t let him take out the knife,” said Renana as she recalled how she screamed watching the two of them struggle.“As a result of our joint actions, my screams and her fight, the terrorist fled,” she said.She went over to her mother with the idea of removing the knife, but she suddenly remembered a first aid class in which she learned it would be wrong to do so.Immediately she called Magen David Adom and asked them to send an ambulance.“I screamed the whole time out of panic. My mother was still breathing. But I already understood that it was over,” recalled Renana, Her next call was to her father who was at the doctor with one of her younger siblings. She told him about the attack, explained that an ambulance was on its way and that her mother was trying to breath. Than she hung up.During the 40-minute drive back to Otniel, Natan kept trying to call friends or members of the emergency response team in the settlement to try and find out more information.“I turned on the radio and heard: ‘A woman was killed in a terrorist attack in Otniel.’ I understood that it was over,” he said.News that security forces had arrested Adeis, 15, from the nearby village of Beit Amra, did not ease or comfort their pain.Although Renana said she was relieved that he could not hurt anyone else.Natan explained that he knew the village well and was good friends with Adeis’s uncle Muhammad and that they were still friends. “I have Arab friends and I will have Arab friends.”When writing about the security situation in a WhatsApp group in Otniel, his wife, Dafna, said she did not believe in acts of personal revenge, but rather in life affirming actions such as having children and building homes.He and Dafna, who worked as a nurse and an infertility expert, had six children, two of whom were foster kids.Dafna was a person who was filled with love and kindness, said Natan.“We’re not angry and we do not hate,” said Natan.Renana added, “but we are also not afraid.”