Rescuers extract Israeli trekkers from Nepal and a mother breathes a sigh of relief. 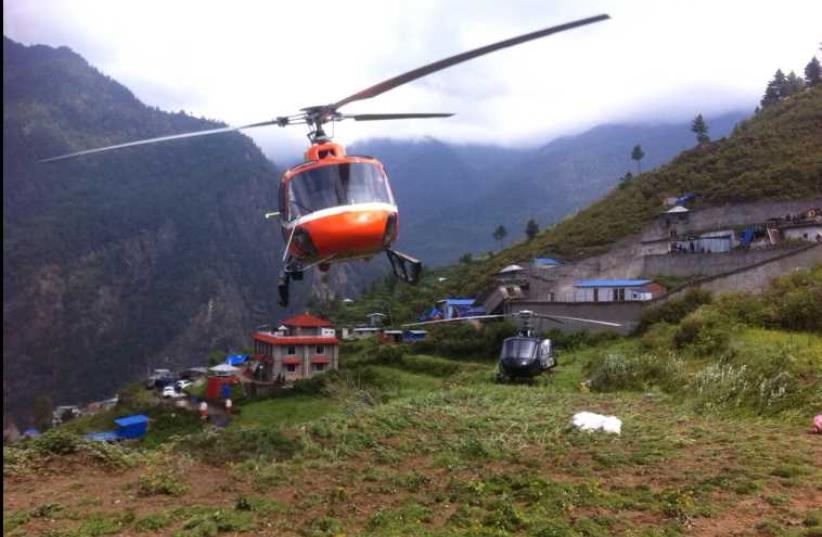 Rescue helicopters are deployed in Nepal
(photo credit: FOREIGN MINISTRY)
Advertisement
“We were rescued. We are fine and on our way to a military base,” Shahar Shavit wrote in an SMS she sent to her mother, Sharon.“I felt like I was born again,” Sharon told The Jerusalem Post later on Wednesday. She had waited for four anxious days to hear those words from her daughter, 22, who had been in the midst of a trek in Nepal when a massive earthquake struck the Himalayan state on Saturday.Sharon had struggled to stay calm as she heard stories of Israelis who made it to safety, while her daughter remained stranded in the Langtang area, with five friends. Over a satellite phone they had begged to be rescued and explained that they were in a dangerous situation.Then, on Wednesday, Sharon understood from the messages of one of the many WhatsApp groups she had joined in the aftermath of the quake that rescue efforts were under way.Sharon didn’t fully relax, however, until her daughter called her. Shahar told her mother that the experience had been difficult and they had been lucky.
IDF operates in Nepal
“I am glad the saga is over,” Sharon said.Earlier in the day, one of the Israeli rescuers, Yohai Lilior, who works for Harel Insurance Company, described how difficult it was to pull a group of Israeli trekkers from the Langtang area to safety.The weather was bad and there were reports of violence on the ground, including a case where locals threw stones at a rescue helicopter because they were upset it was not picking them up.“Even the Nepalese Army was scared to land in that area,” said Lilior in an interview he gave to Army Radio.He had been on another rescue mission on Tuesday, when the clouds parted. He took advantage of the lull in the weather to land briefly in that area, some distance away from where the Israelis were waiting.He told the helicopter pilot to leave, and he walked on foot to find the trekkers, so he could make sure they were safe and calm the situation down in advance of a Wednesday rescue.These were people who had survived an earthquake and an avalanche, Lilior said. Their villages were destroyed. It was cold and raining and food was scarce, he said.The Nepalese knew that no one was coming for them, so they thought they could use the Israelis almost as hostages to ensure their own rescue, Lilior said.By arriving the night before and assuring all those in the group that they would be rescued, he was able to calm the situation down and create a safe environment by which to evacuate the trekkers the next morning, Lilior said.Before he arrived a number of Israelis in the group had been attacked with sticks and stones.“They could have been lynched,” Lilior said.One the trekkers who was rescued, Shahar Eliav, said that in the beginning the situation was scary, but that pretty quickly it turned into a “battle for survival.”