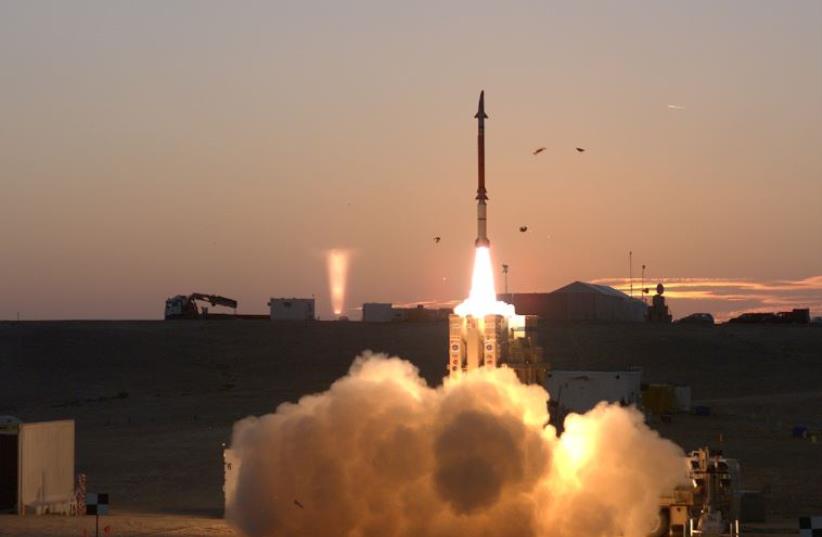 IAF takes possession of David's Sling air defense system
(photo credit: DEFENSE MINISTRY)
Advertisement
The Defense Ministry and US Missile Defense Agency on Tuesday began handing control of the David’s Sling air defense system over to the Israel Air Force following a series of successful trials that were completed in December.The IAF’s Air Defense Branch has begun receiving the main components of the system in the handover, which the Defense Ministry said will take a number of weeks to complete.“In the first stage, project managers from Homa [the administration in charge of developing missile defenses] together with military industries, headed by prime contractor, Rafael, will begin handing over the interception, command and control, and radar systems,” the Defense Ministry said.David’s Sling can intercept short- to medium- range rockets and ballistic missiles, including guided projectiles, cruise missiles, aircraft and drones. Its range of coverage means it can destroy incoming threats over enemy territory, away from Israeli skies.Last week, an Israeli security source said David’s Sling “will become operational this year,” and called it “an inseparable part” of Israeli air defenses.The system will join the IAF’s multi-layered rocket and missile-defense systems, and allow Israel to cope with a wide-range of existing and future threats “more effectively,” the ministry said.It is designed primarily to deal with precision- guided incoming projectiles, and will provide a back-up to the Arrow air-defense systems.David’s Sling Multi Mission Radar was developed by IAI’s subsidiary, Elta, and Elbit Systems designed its command and control system, called Golden Almond.The trials, which were completed December 21, took place in southern Israel. They were led by Rafael Advanced Defense Systems, which is developing David’s Sling, together with the US defense company Raytheon.