IBC progresses as if there’s no crisis

Despite being at the center of a heated coalition debate that is threatening to send Israel to early elections, the Israel Broadcasting Corporation forges ahead with preparations for its launch. 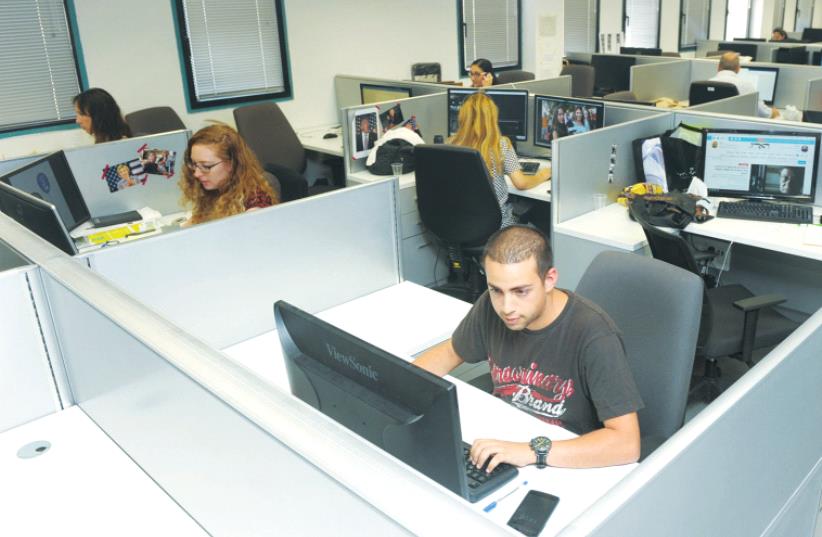 STAFFERS WORK in the offices of the soon-to-debut Israel Broadcasting Corporation in Modi’in.
(photo credit: AVSHALOM SASSONI)
Advertisement
With only a month to go before its designated launch date, the Israel Broadcasting Corporation continues to put out daily press releases as if there were no crisis.Whether this is a head-inthe- sand policy or a show of confidence in Finance Minister Moshe Kahlon’s strength remains to be seen.The first four meetings between Kahlon and Prime Minister Benjamin Netanyahu ended in stalemate instead of compromise, with Kahlon seemingly ignoring that it is Netanyahu who has the final word on whether to disband the government and call an election.While the IBC is putting out releases about new staff, logos and programs, the Israel Broadcasting Authority is interviewing political analysts and Knesset members, and reporting on developments or lack of them, as well as on protest demonstrations by IBA workers. Radio and television broadcasts are occasionally interspersed with the recording of Netanyahu’s declaration that the IBA will be rehabilitated, or the IBA workers’ warning slogan: “Today it’s us, tomorrow it’s you.”Early on Wednesday, veteran IBA journalist and Israel Prize laureate Ya’akov Ahimeir, who will have a job either way, commented on the lack of sensitivity and compassion by officialdom to the plight and suffering of IBA workers who do not know what the future holds for them.Political commentator Yoav Krakovsky said, in the same vein, that every day more than a thousand IBA workers wake up to a different scenario because of all the bickering.Some 200 IBA workers demonstrated outside the Knesset later in the day and tried unsuccessfully to break through the gates. One person was detained by police.Two others required medical attention. The demonstrators also blocked part of Eliezer Kaplan Street, which leads to the Knesset, then blocked the entrance to the nearby Finance Ministry.Histadrut labor federation chairman Avi Nissenkorn had to be rescued by police after he was trapped in his car by demonstrators carrying placards with slogans like “Nissenkorn, who are you serving, the workers or the Treasury?” Another slogan was directed at former communications minister Gilad Erdan. The Hebrew said: “Erdan sochen nadlan,” or “Erdan real-estate agent.” Erdan pushed for the IBA’s closure and sale of its extensive real-estate assets.Profits from those sales were to be first used as severance pay for more the laid-off workers.Another placard was aimed at Netanyahu: “Mr. Prime Minister, my mother is very despondent.”The conventional wisdom at the IBA is that in the long run there will be a merger of sorts between it and the IBC, to be delayed until such time as new legislation is formulated and passed. As far as anyone knows, Netanyahu and Kahlon agree on this, but Netanyahu wants the IBA to hire staff from the IBC and Kahlon wants the IBC to hire the staff of the IBA. Whatever happens, the general belief is that another public broadcasting service will be set up in the aftermath of the merger and will operate under a different name, a move that would make both the IBA and the IBC disappear.Meanwhile, the IBC announced on Wednesday that Walla News journalist Dov Gilhar, who was the last journalist to interview Yitzhak Rabin on the night of his assassination, will present a daily television program on Kan, as the new broadcast corporation is known in Hebrew.Gilhar’s career as a journalist began at Army Radio. He later became one of founding team on Channel 2 and was its first parliamentary correspondent.He was also co-presented with Yardena Arazi on a morning show, directed documentaries for Channel 10, and was a late-night presenter.For the past two years he has been presenting Walla News via Reshet.The IBC also announced that Kan will have a daily cultural program hosted on different days by four female presenters: Shifra Kornfeld, who was raised in a haredi (ultra-Orthodox) family in the Old City of Jerusalem; Esther Rada, who is of Ethiopian origin; Dafna Lustig, a fashion critic; and Lucy Ayoub, the product of a Christian Arab father and a mother who is the daughter of Holocaust survivors who converted to Christianity.The quartet was designed to refute the argument of Culture and Sport Minister Miri Regev, who says that the IBC lacks diversity.