Brig.-Gen. Mordechai Kahane is under investigation for keeping illicit military equipment in a private storage container. 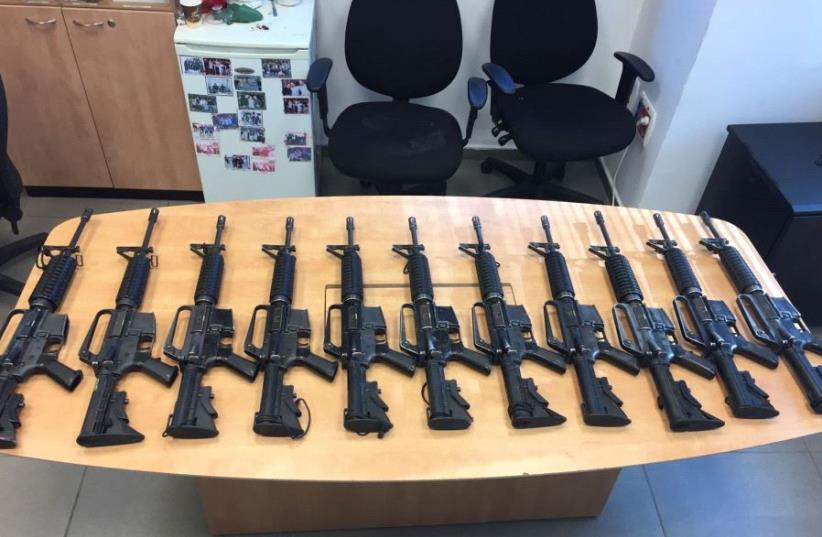 Retrieved weapons stolen from an IDF base in southern Israel
(photo credit: ISRAEL POLICE)
Advertisement
The head of the IDF’s border defense force, Brig.-Gen. Mordechai Kahane, has been suspended from duty for two weeks following an inquiry over suspicions he kept military equipment in a container for personal use, the army has announced.The decision to suspend was made by IDF ground forces commander Maj.-Gen. Kobi Barak and approved by IDF Chief of Staff Lt.-Gen. Gadi Eisenkot after allegations surfaced that Kahane “for an extended period of time, received and possessed, improperly, military and civilian equipment.”According to Israel Radio, the military equipment which was kept in a private storage container included a handgun, night-vision instruments, bullets and an AK-47 believed to have been taken from Hamas. The storage locker, which he brought with him to every base where he served, also held various appliances, including a television and a washing machine.Chief Military Advocate General Col. Ran Cohen and Deputy Chief of Staff Ariel Hevron, the senior officer’s defense counsel, was quoted by Yediot Aharonot as saying Kahane has served in the IDF for 28 years, almost entirely in combat and command roles.“The officer is principled and honest and has been fully cooperating with investigators and provided his account. Brig.-Gen. Kahane is of the opinion the inquiry should proceed to its conclusion and the IDF’s enforcement authorities should be allowed to make judgments on this matter, and therefore accepts the decision of GOC Army Headquarters to suspend him for a short period of time.“In Kahane’s view, an IDF commander taking personal responsibility is not just empty words and he intends to live by that credo should any faults be found in his conduct. The information we hold shows Kahane’s conduct has no criminal aspects, and the inquiry should therefore be concluded post haste and the cloud hanging over him dispersed,” they added.A nephew of the late Rabbi Meir Kahane, Brig.-Gen. Kahane began his career in the IDF in the Golani Brigade and later commanded both Sayeret Golani and the Egoz Unit. He also commanded the Gaza Division’s Southern Brigade and the Squad Commander School’s Brigade.He currently serves as the IDF’s chief combat intelligence officer and was named the head of the newly formed Border Defense Force earlier this year.The IDF Criminal Investigation Division investigation is ongoing and the IDF will only then decide what steps are to be taken against Kahane, the army said.