IDF chief: Women have a unique role in the navy 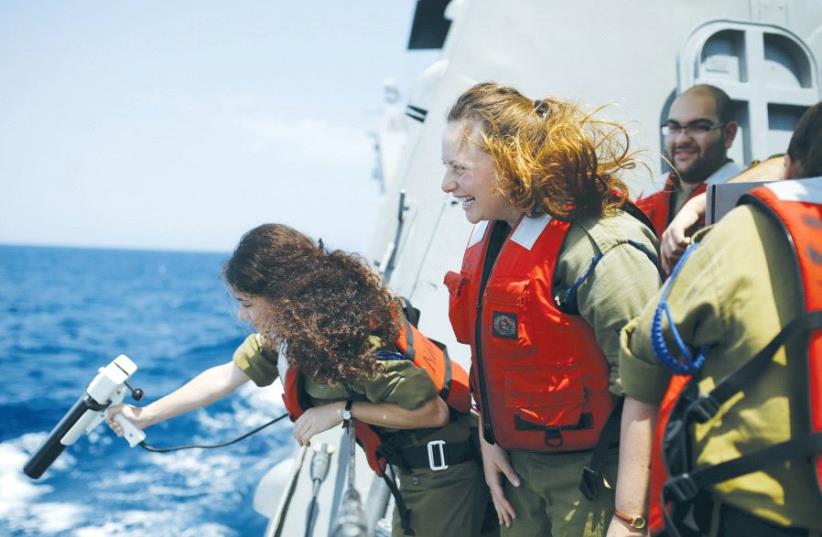 A NAVAL OFFICER takes a measurement during a drill at sea.
(photo credit: AMIR COHEN - REUTERS)
Advertisement
Amidst the outcry against women joining the military, two female cadets graduated alongside 30 male cadets from the IDF’s prestigious Naval Officers Course.At almost two-and-a-half years long, it is one of the most intensive programs in the IDF.More than 2,000 candidates apply with only 90 passing the initial tests.Speaking at the ceremony at the navy’s base in Haifa on Tuesday, IDF Chief of Staff Lt.- Gen. Gadi Eisenkot praised the two female graduates of the course, one of whom was named as the outstanding cadet of the class.Eisenkot made his comments amid remarks by Rabbi Yigal Levinstein against women enlisting in the army.“Among the graduates of the course there are two female graduates, naval officer Dana and naval officer Na’ama, two naval officers whose sense of mission and love of the country led them to choose a challenging and demanding path,” Eisenkot said. “By standing here, you have an important role in establishing the status of women in key positions of the IDF’s fighting force.”In 1998, the Naval Officers Course opened its ranks to women, and in 2014 the option of becoming a naval vessel commander was made available to women.Guy (last names withheld for security reasons), one of the graduates of the course, told The Jerusalem Post, “There is absolutely no difference between men and women. During the course, they did everything alongside us and they serve in the same positions.”
Joint Navy and Air Force drill (IDF Spokesperson)
According to his cousin Omri, who will begin the Naval Officers Course next week, it’s extremely important that women are in the course.“In my opinion, we need to show that women can take their future into their own hands, in any role in the army, be it a fighter or an officer or what have you. Women can also act in a certain way and think of things that perhaps a man just wouldn’t do or think of,” he said.In the first stage of the course, cadets undergo rigorous training to learn the basic military skills as well as how to operate small sea vessels.Following their basic training, they are divided into four different areas of expertise – submarines, sailing, machinery or electronics – which will determine their post following graduation. During the advanced training, cadets o undergo a diving course to become two-star divers able to dive to depths of up to 30 meters. The next stage in the course lasts about eight months, during which they undergo practical and theoretical training in the designated position aboard the ship.At the end, each graduate is awarded the rank of lieutenant junior grade, necessary for commanding naval vessels, as well as a bachelor’s degree in political science from Haifa University. Graduates are committed to 61 months additional military service As the navy grows in importance, especially in regard to protecting the country’s coastline from waterborne threats as well as providing protection to the country’s gas fields and shipping lanes, interest in the course has grown.Guy told the Post that he always intended to join the navy.“From the beginning, I really wanted to join the navy and I really wanted to be an officer. I was attracted by the Naval Officers Course, so when I passed the gibbush [field examination trial], I found it to be a track that could bring me to the next level. The role that we play in the army is extremely important and is very different from any other role in the army.”Omri told the Post that when he graduates from the officers course he knows he will have an “important and commanding role in the navy.”“I don’t know what happens in the course yet, but as someone who looks at it from the outside, I see it as a place where you can challenge yourself, know that you will be able to reach very high positions and do things that otherwise you couldn’t even imagine. It’s about pushing yourself to your limit and even beyond that,” he said.The graduates will begin their roles next week.