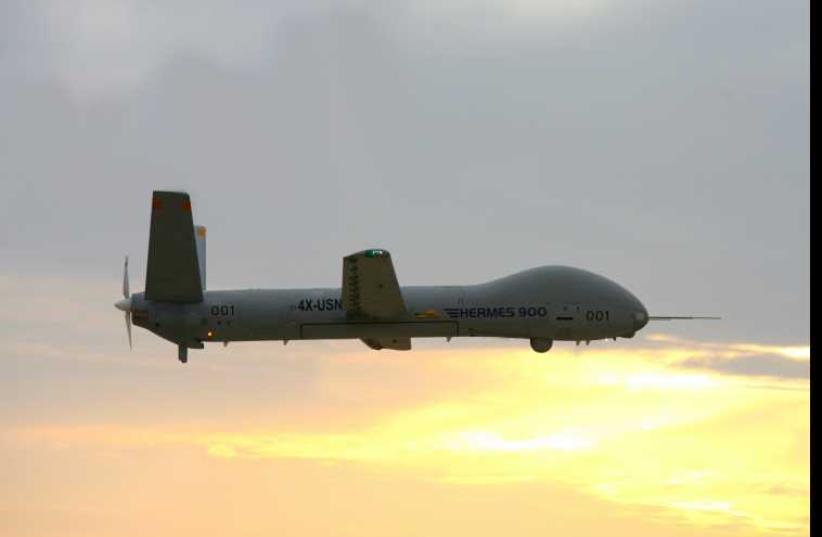 Hermes 900 drone
(photo credit: IDF)
Advertisement
An unmanned aerial vehicle operated by the IDF’s artillery corps crashed in the northern Gaza Strip on Wednesday morning.The Skylark drone had been on a routine reconnaissance mission when it fell out of the sky east of Gaza City in the Shejaia area. According to the army, no sensitive information was compromised and the circumstances behind the crash were being investigated.The Skylark, built by Elbit Systems, is the IDF’s smallest drone, measuring in at seven-and-a-half feet, and operates on all fronts for tactical surveillance. It can be launched by one or two soldiers and operated on the roof of buildings or in the back of armored personnel carriers, providing live-video to operators once airborne.Though considered an effective and popular drone, there have been several crashes since it was delivered to the ground forces in 2010.In January, a Skylark crashed in southern Lebanon after suffering a technical malfunction. A week later the IDF temporarily lost contact with a Skylark over the Balata refugee camp in Nablus and later located it near a Samaria Regional Brigade post.Skylarks also have crashed in Gaza, including in July 2015, when one fell in the Strip as a result of a malfunction. Hamas’s military wing recovered the remnants of the crashed drone and later released a video claiming to have put it back together, making it operational.