"The Ground Forces will examine the continuation of the officer's service," the military added. 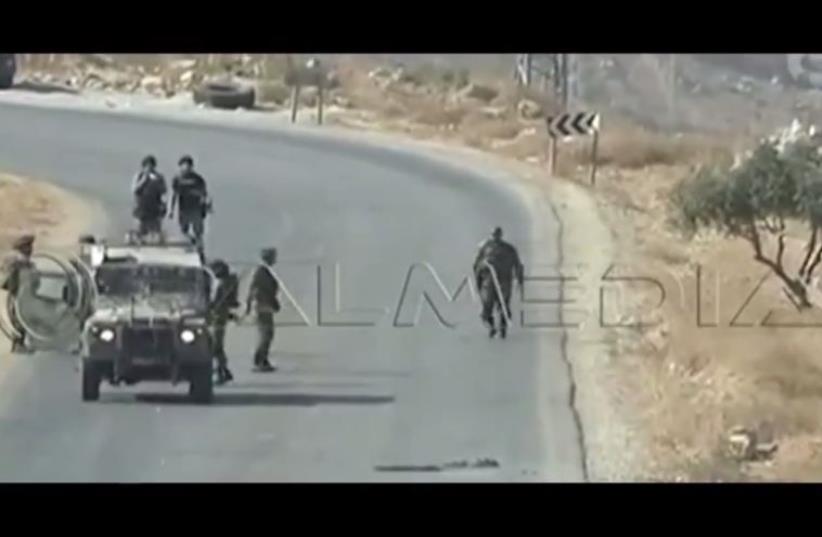 IDF forces, AFP journalists, September 25, 2015
(photo credit: screenshot)
Advertisement
The IDF has removed an officer from his position after investigations found that he had acted wrongly when a force under his commander broke the cameras of foreign journalists in the West Bank last week.On September 25, Givati Brigade soldiers at Bet Furik smashed the cameras of two Agence France-Presse reporters who had arrived to film a Palestinian demonstration.In a story it wrote about the incident, AFP said the IDF threw Italian video journalist Andrea Bernardi to the ground, jabbed him with a weapon and held him down until he produced a press card and that soldiers took away the camera of Palestinian photographer Abbas Momani.Following that incident “in which a force commander behaved in a manner that is incompatible with expectations of an IDF commander, an operational investigation was launched by the head of the sector, and an additional investigation was launched by the commander of the Givati Brigade, Col. Yaron Finkelman,” the IDF said.On Thursday, the Southern Command Headquarters chief, Brig.-Gen. Udi Ben Mohad, accepted Finkelman’s position that the officer had failed in his duties, and should be ejected from his position.“We will examine the continuation of the officer’s service,” the military source added.Last week, MK Nachman Shai wrote a letter to Defense Minister Moshe Ya’alon demanding that he instruct the IDF to investigate the incident and make it clear that such behavior must change.“It cannot be that IDF soldiers harm and attack members of the press,” Shai said. “The job of the press is to be everywhere all the time. It is an inseparable part of reality. Breaking cameras and exercising violence teaches the journalists that the soldiers and their commanders do not understand the basic values of democracy – first and foremost, freedom of expression.”In edited video from the incident, two men are wearing helmets and flak jackets marked “Press,” and a soldier can be seen throwing one of their cameras to the ground, breaking it.The two photographers then walk away, but a soldier runs after them. A jeep pulls up and other soldiers come out. Again, the soldiers take one of their cameras and break it.The Foreign Press Association issued a statement denouncing the conduct of the soldiers.Tovah Lazaroff and Jerusalem Post staff contributed to this report.