Home Front Command is working with all Israeli defense industries in the research and development and production of reinforcement materials for sites crucial to keeping the country running in war. 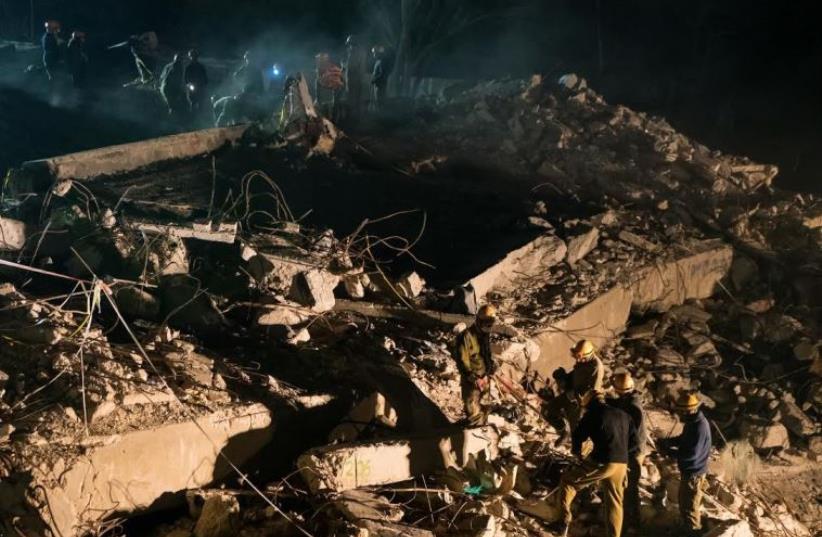 Two new Home Front Command search and rescue battalions training in December
(photo credit: IDF SPOKESMAN’S UNIT)
Advertisement
The IDF Home Front Command and government ministries have completed fortification work to secure several strategically vital sites against rocket and missile attacks, a senior IDF source said.Work to secure dozens more sensitive infrastructure sites will commence soon, enabling them to continue to function even if hit by rockets or missiles, the military source told The Jerusalem Post.He stressed that the role of the Home Front Command is to respond defensively to enemy projectile fire, leaving the IDF’s branches to handle offensive actions.“Each site is fortified in accordance with the threat posed to it,” the source said.“This is about improving survivability, though there is no such thing as 100 percent protection.”The Home Front Command is working with all Israeli defense industries in the research and development and production of reinforcement materials for sites crucial to keeping the country running in wartime and enabling the IDF to continue to focus on offensives.It is also working with the Public Security Ministry to formulate legally binding protocols for future construction of key sites. The protocols will obligate every government ministry to create fortifications for sites under their jurisdiction.“It is being drafted now, though many months separate us from a final draft,” he said.The source provided a rare glimpse into the process that led to the drawing up of a priority list that determines which sites receive fortifications first.“Israel identified which national infrastructure needs protection against rockets and missiles. This process, which is ongoing, was achieved through a dialogue among government ministries. The dialogue results in the selection of sites, such as ports, power plants and oil refineries.The list is guided by the importance of each site to the ability of the country to continue to function during an emergency,” the source stated.“At the top of our priorities, are those sites that enable the military effort to defeat the enemy to continue. Such sites take priority over, for example, sites that provide power to civilians,” he said.Representatives of government ministries have been meeting at Israel’s National Emergency Management Authority offices to formulate the classified list.Meanwhile, in the civilian housing realm, the Home Front Command has been working on creating a digital database of every home in the country, giving it a precise picture of which building has safe rooms or bomb shelters and which are near public bomb shelters.Between 25% and 30% of all homes in the country have no protection at all against rockets and missiles, and the Command is attempting to decrease that figure.The Command is also loading onto its websites instructions for civilians on how to hire contractors to fortify their homes using thin steel plates and plaster, in work that can be complete within three days.