The Merkava MK4 Barack is designed as a “smart tank” with dozens of sensors to identify the enemy, and rapid fire closure that allows elimination of the target before it disappears from view. 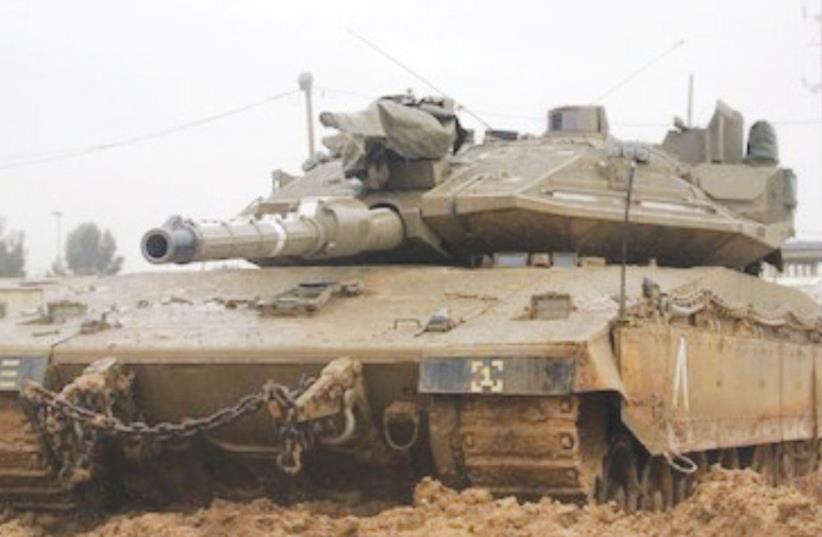 THE MERKAVA MK4 ‘Barack’ main battle tank (pictured) us currently under development.
(photo credit: IDF)
Advertisement
The Armored Corps will soon have cutting-edge vehicles capable of winning decisive victories, Brig.- Gen. Baruch Matzliach, head of the Merkava Tank Directorate, said on Wednesday.Speaking at the Second International Ground Warfare and Logistics Conference at Latrun, west of Jerusalem, Matzliach said that Armored Corps combat teams will soon have a range of integrated vehicles, including the Merkava MK4 “Barack” (or Lightning) main battle tank that is currently being developed.“We have to look at all these vehicles as a family which act like a team. The vehicles won’t be identical, but they will compliment each other,” he said, adding that this will give the IDF superiority on the battlefield.The Merkava MK4 Barack is designed as a “smart tank” with dozens of sensors to identify the enemy, and rapid fire closure that allows elimination of the target before it disappears from view.The Armored Corps is fighting more and more unconventional wars and facing new enemy tactics.According to Matzliach the main challenge facing it today is the “disappearing enemy,” which arrives, attacks and retreats within seconds.If in previous wars it was usually clear where the enemy was located, today’s enemy is decentralized and much harder to get a fix on, he said. They have become “time sensitive targets,” Matzliach said, adding that the challenge is to strike them immediately after they are detected.“Man is not capable of processing all the information when it comes to the disappearing enemy,” he said, comparing the sensors and computer in the “Barak” to the WAZE navigation system that makes things easier for drivers.“We understand that we need a real-task computer in the tank to fuse all the information together, to present it to the tank commander so he can be able to make only the most important decision... so he can really see and identify the target and analyze situation in order to make the decision to shoot or not.”As a “smart-tank” the “Barak” will have fused sensors and a task computer that will present all information to both the crew inside the tank as well as to other tanks and vehicles present in the field. The simplification and sharing of intelligence and information via C4I (Command, Control, Communications, Computers, and Intelligence) and the interoperability of all vehicles is crucial for more accurate and quicker hits.In addition to the “Barak,” which is set to be ready within the next few years, Matzliach also described the Defense Ministry’s new wheeled armored personnel carrier, known as the “Eitan,” or “Steadfast,” which recently finished its first round of operational testing with the Nahal infantry brigade.
Eitan, the IDF’s first wheeled armored personnel carrier
Replace the aging M113 APC, the “Eitan” will be able to carry 12 soldiers – including the commander, gunner and driver – who will enjoy more comfortable seating, air conditioning and touch-screen systems offering a 360-degree view of the battlefield.While less fortified than the Namer APC that it will complement, it will be equipped with advanced defense systems such as the Trophy active protection system (which will also be installed on the “Barak”) and hi-tech armor designed to protect against rocket- propelled grenades and antitank missiles. The Eitan will also come equipped with an FN MAG 7.62 mm general-purpose machine gun, .50 caliber heavy machine gun, a 30 mm cannon with a range of 2,500 meters, and a missile launcher that can be operated without the crews leaving the vehicle and exposing themselves to the enemy.“We are taking the APC to a whole new level, turning the Namer into an infantry fighting vehicle, which will allow crew to use it not only as an armored vehicle which wheels them from place to place,” Matzliach said.