IDF forces relayed their experience in combating regional terrorism threats to the US forces, according to Israel's Channel 2. 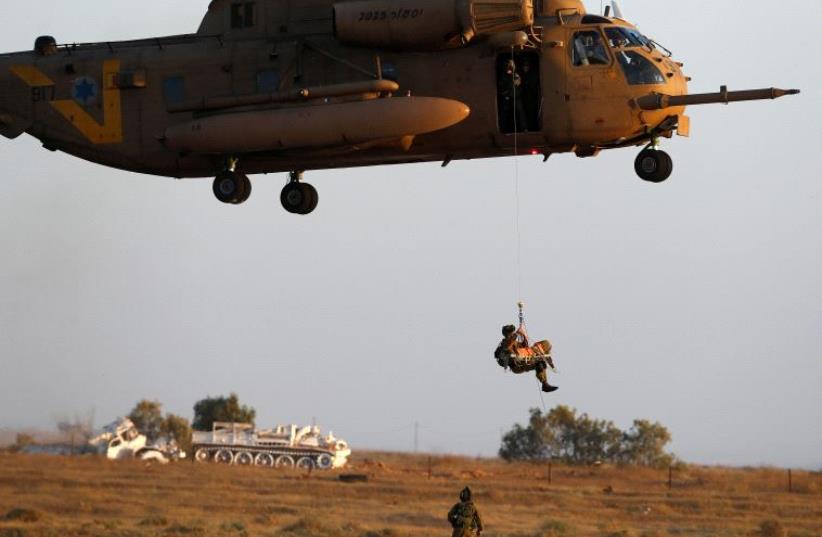 An IAF Sikorsky CH-53 helicopter demonstrates the evacuation of a wounded person during an aerial demonstration at a graduation ceremony in southern Israel [File June 30, 2016]
(photo credit: REUTERS)
Advertisement
IDF special forces units teamed up with US Marines last week for a joint military exercise in the Negev Desert in part aimed at coordinating techniques for combating terrorist activities such as that of Islamic State, Channel 2 revealed Thursday morning. The drill dubbed 'Noble Shirley,' which was kept under wraps until now, reportedly involved special units from the Israeli Air Force, Navy and ground forces. Channel 2 reported that the IDF forces relayed their experience in combating regional terrorism threats to the US forces, which can apply the training to America's fight against ISIS in the Middle East.During the exercise, the troops took part in drills simulating helicopter landings behind enemy lines, urban warfare above and below ground along with close-range combat and military takeover techniques. Additional exercises also reportedly concentrated on medical responses to injured troops in enemy territory and the coordination of Israeli and US medical networks.The drill was said to have been conducted during day and nighttime hours.Last week's reported drill came some three weeks after the Defense Ministry and the US Missile Defense Agency completed a test aimed at ensuring Israeli and American air defense systems can operate cooperatively in a future war.During the trial – the first of its kind – the physical connectivity between the systems was tested.The test involved sites scattered around the United States, Israel and Europe.Elbit Systems EW (Electronic Warfare) and SIGINT (Signals Intelligence) – Elisra led the trial, which was designed to see if Israel’s Arrow and David’s Sling systems could link up with American systems. Also earlier this year, the US and Israel held a joint air defense exercise.During the Juniper Cobra 2016 exercise, which began in February, the US European Command integrated the command and control systems of the Aegis Combat System, Terminal High Altitude Area Defense and Patriots, while Israel plugged in systems from its Arrow-3, David’s Sling and Iron Dome defenses.