IDF to compete in Russian military contest for first time

Other newcomers to the games this year will be Syria, Fiji, South Africa, Uzbekistan, Uganda and Laos. 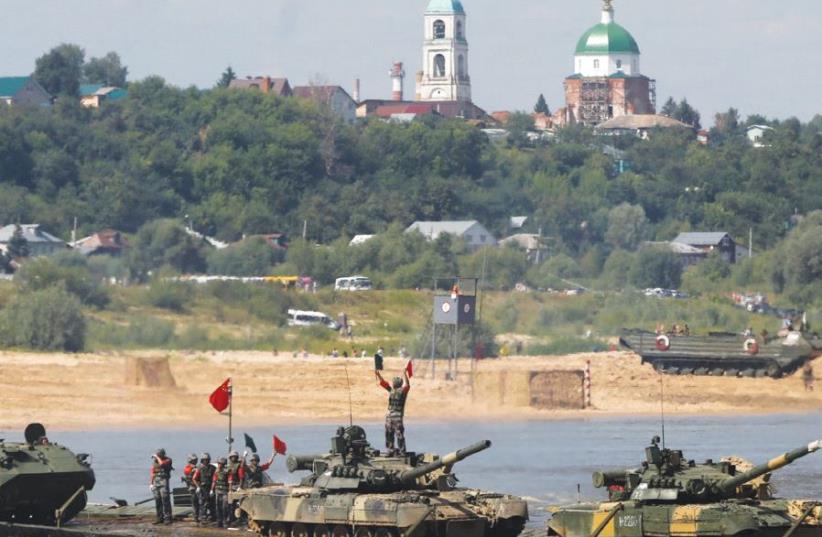 CHINESE CREW members transport T-80 tanks on a pontoon bridge during the Open Water competition for pontoon bridge units as part of the International Army Games 2016 in Murom, Russia
(photo credit: REUTERS)
Advertisement
For the first time, the IDF will compete this summer in Russia’s third annual International Army Games to take place June 29 through August 12 in Russia, Azerbaijan, Belarus, Kazakhstan and China.Israel will compete in the categories of field medicine and field kitchens, the IDF Spokesperson’s Unit said.A total of 73 countries have been invited to participate, with 27 having already confirmed their attendance and another 16 expressing interest, according to Russian media.Other newcomers to the games this year will be Syria, Fiji, South Africa, Uzbekistan, Uganda and Laos.Israel’s choice to limit its participation may be an effort to keep a lid on costs, avoiding the exposure of IDF capabilities or lacking permission from the Americans to send US-built equipment to Russian soil.But why is the IDF sending only doctors and cooks? “Israel’s military medical teams already have been deployed all around the globe so there is no problem of exposing sensitive capabilities. And who really cares about a classified recipe for the IDF’s falafel?” Ofer Fridman, a Russian-born Israeli military expert and visiting fellow at the Department of War Studies at King’s College in London, told The Jerusalem Post.The 2017 program consists of 28 contests, including five new ones, such as a competition in drone usage that will take place in Kazakhstan, which also will host competitions in artillery and sniper fire. China is set to host six contests, while Belarus and Azerbaijan will host one contest each.Other events include a tank biathlon and a competition involving paratroopers, military medicine, military police and engineering corps.Fridman, who has a doctorate from the University of Reading and is writing a book on Russian warfare titled Russian Hybrid Warfare, said that in analyzing the current state of affairs of relations between Russia and the West, many experts have been referring to different Cold War scenarios.The IDF’s participation in the games, he said, is part of Israel’s attempt “to flirt with both the Americans and the Russians.”“In the beginning of the 1950s,” Fridman said, “Israel chose a policy of non-identification, trying to play on both sides of the game because the West offered better material support and the Israeli ideology of that time aligned more with the Soviets.”According to Fridman, however, it did not take long for the non-identification policy to fail. Yet, while today’s Israel is not the Israel of the 50s, the idea of non-identification seems to still be ingrained in the minds of Israeli politicians.“The West is still Israel’s biggest economic supporter [but] the Russian military plays in the Israeli backyard and requires close cooperation,” Fridman said, adding that the one million Russian immigrants in Israel are more inclined to support Moscow than Washington.Only time will tell, he said, whether Israel’s attempt to enjoy both worlds will succeed, though he stressed that “the current state of relations between Russia and the West is not exactly the Cold War so the second attempt of Israeli non-identification might be more successful than the previous one.”