The six soldiers, some of them of a high rank, will be disciplined by the IDF following a controversial incident in which a Lebanese man infiltrated Israeli territory. 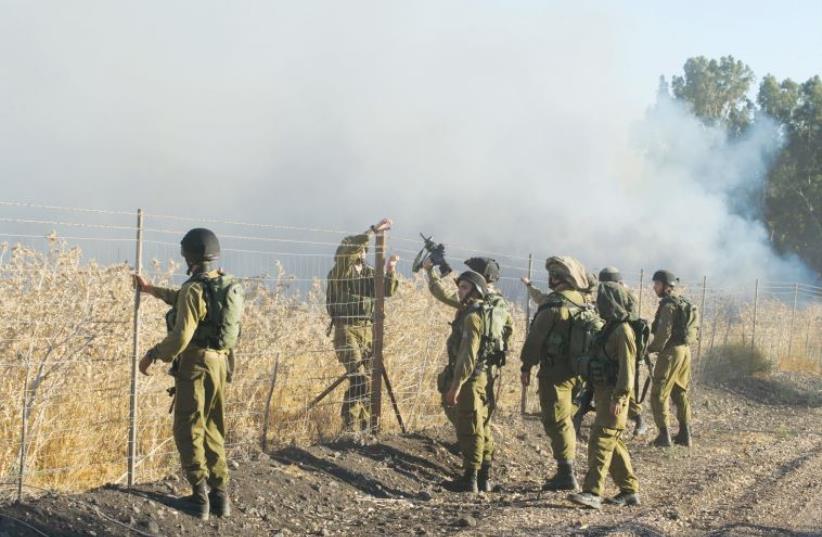 Soldiers fix a fence on the border with Lebanon while smoke billows in the background, from rockets fired from Syria
(photo credit: REUTERS)
Advertisement
Two senior officers and four IDF soldiers will be disciplined following an investigation by the IDF’s Northern Command into how a reportedly mentally ill Lebanese man was able to infiltrate northern Israel on April 27, the army announced on Friday.Head of the IDF’s Northern Command, Maj.-Gen. Yoel Strick, decided to officially reprimand the battalion commander, and the deputy company commander responsible for monitoring the area has been relieved of his duty. Four other soldiers will face disciplinary hearings.“Operational lessons were learned regarding the functioning of the forces at the time of the incident,” read a statement from the IDF.“The lessons of the incident will be transferred to the forces and additional professional complementary investigations will be carried out to prevent recurrence of such cases in the future.”The investigation, led by Strick sought to understand how the Lebanese citizen, identified as Ali Mari, was able to enter Israel undetected by soldiers responsible for securing the border.Mari crossed into Israel unarmed in the area of Moshav Margaliot and walked to the central bus station of Kiryat Shmona, about 10 km. from the border fence.He was arrested and interrogated by the Shin Bet before being transferred back to Lebanon the next day through the Rosh Hanikra crossing via the United Nations Interim Force in Lebanon.According to an interview on Lebanese television, Mari’s father said that his son was mentally ill and had previously claimed that he was Jewish, telling his father that he had wanted to go to Israel.
Smoke rises from shells fired from Israel over Al Wazzani area in southern Lebanon after Hezbollah bombs Israeli forces at the Lebanese border
“My son’s mind is not right; he says he was originally Jewish,” his father said, adding “Can you imagine a normal person doing such a thing?” Israel’s northern border with Hezbollah continues to pose an ongoing security threat which the IDF monitors.In a recent interview with The Jerusalem Post, a senior IDF officer stated that it is not only the threat posed by Hezbollah rocket barrages which concerns the IDF but the very real possibility of ground attacks by the terror group against Israeli civilian communities.For the past several years Israel has been investing significant amounts of money and effort into strengthening its defenses along the border with Lebanon, creating obstacles and the building of high concrete barriers to help prevent any attacks by Hezbollah.