‘It’s time to stop merely counting the number of strikes, and start measuring their effectiveness’ 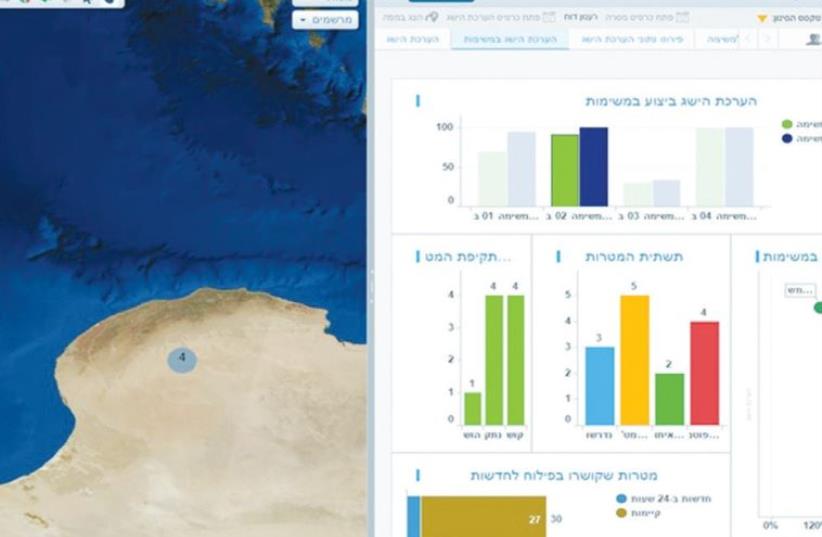 THIS SCREENSHOT from the Lake Castle battle management system presents data on missions and targeting
(photo credit: IDF SPOKESPERSON'S UNIT)
Advertisement
A new version of a key battle management system received by the IDF is designed to ensure that crippling, successive, accurate strikes are leveled at Israel’s enemies in future conflicts, senior military sources told The Jerusalem Post.The system, known as Lake Castle, was upgraded in under three months by the Military Systems for Command, Control and Management, which is made up of hundreds of young computer programmers.The changes became operational in January.Lake Castle, first created a decade ago, generates a centralized operations picture for military decision-makers that can be accessed by commanders at the General Staff and territorial command levels.The new version produces battle insights much faster than its predecessor, and provides decision-makers information on how to make the most effective use of available firepower, sources said.“We stopped merely counting the number of strikes, and started measuring their quality and effectiveness,” an officer said.“I could hit 1,000 targets, but I need to know what each attack did, and what the net sum of the attacks achieved. If, for example, our goal is to minimize rocket fire at Israel, we want to reach that goal on our first attempt. We do not just want to give targets to commanders. We want to produce knowledge,” he said.“X strikes can achieve Y. But half of X can achieve two Ys if things are done correctly and effectively. Decision-makers need to know if they are hitting the right targets the first time. This produces more lethality, and raises the quality of strikes,” he said.The IDF Northern Command, responsible for the Lebanese and Syrian arenas, held a drill at the start of January to test the new system and its concepts, while the Southern Command, which deals with the Gaza Strip and the Sinai Peninsula, is receiving it now.The system is considered fully operational.The speed at which the new generation system was developed comes in the wake of sweeping changes that were made to Military Systems for Command, Control and Management, including keeping all programming in-house and developing all command and control systems within the division.“We are creating algorithms that cross all sorts of worlds,” a second source from the division said. “Ten years ago, the IDF would work in blocks... development processes were separate from the world of operations. Today, in light of the regional chaos and fast-changing operational concepts,” such working methods have become obsolete, the source added.The division now speaks directly to those in the IDF responsible for activating kinetic strikes and commanding military maneuvers in enemy territory, as well cyber warriors.The result is a series of integrated development teams that bring together members of the division and officers from the ground forces, intelligence directorate, air force and navy.“We create applications for all of them. The old borders between the branches are fudged,” the source said.The programmers have begun using open-source architecture, much like a hi-tech firm, to speed up developments of applications and move quickly to production.The division also created a centralized targeting database that exports data on enemy targets to “clients” in the IDF on a need-by basis, a process that was developed closely with Military Intelligence.“This is, unequivocally, a revolution. Operationally, technologically, methodically,” the first source said. “In 10 years, it will be seen as part of a broader evolution.”The division, a part of the Lotem-C4i Technological Unit, is also working on processing “big data” into useful battle knowledge for commanders.It has created an extensive IDF Web that runs all military applications through a browser, enabling swift data sharing across the military’s branches.Instead of cumbersome client servers, applications that resemble Facebook and Google searches are used to run military applications, the sources said.Reserves officers using it for the first time can master it “within two hours,” they added.“We don’t need to invent new technologies. We identify what exists in the civilian market and adopt,” said the first source.“There is a delicate balancing act here between being a military division and a hi-tech firm. Sometimes it is hard to know where to draw the line. Programmers could be involved in a hi-tech development, and then go to a two-week military drill with a kit bag,” he said.Sometimes, the innovations by the 19-year-old military programmers surpass the defense establishment’s ability to adopt them; one programmer recently came up with an idea on how to set up an application for security personnel telling them where to set up checkpoints following a car-ramming terrorist attack based on map-analysis algorithms.Looking ahead, the sources said they face two challenges.The first is the ongoing battle to keep programmers from moving to the private sector.In addition to their mandatory service, programmers sign up for some three more years, but are then free to move on to hi-tech firms where they can earn many times their military salaries.The second challenge is hostile public discourse that has turned against career soldiers, painting them as exploitative drains on taxpayers.“I had to talk key personnel members into staying because of this,” said the first source.“We all stay only because of our mission. We understand what we are doing here. Every hour that we stay multiplies the IDF’s power and saves civilian lives, both on our side and the other side,” the second source said.