When media rely on anonymous sources with unclear or exaggerated access, we are left with more questions than answers. 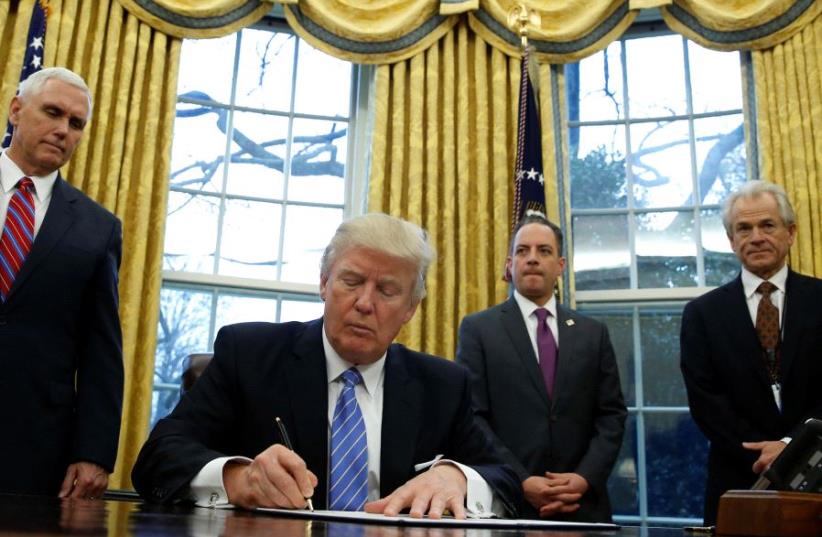 US President Donald Trump signs an executive order in the Oval Office of the White House
(photo credit: REUTERS)
Advertisement
“The life of a spy placed by Israel inside ISIS is at risk tonight,” ABC News reported on Tuesday.
White House will not say if Israel was source of sensitive info (credit: REUTERS)
The latest allegations is that US President Donald Trump leaked, or passed, information to Russian Foreign Minister Sergei Lavrov during a meeting last Wednesday. But if a spy working for Israel and privy to the latest ISIS plots is now at risk, where is the anger from Jerusalem? Instead there is a wall of silence in Israel that could convey real concern, but could also indicate that this US scandal is not rocking the intelligence services the way it is being portrayed.The initial report came in The Washington Post on May 15, with explosive claims that “according to current and former US officials,” Trump had disclosed intelligence that “jeopardized a critical source.” The New York Times quoted “current and former American government official[s]” as well, perhaps the same ones. “Trump discussed contents of the intelligence, not the sources and methods.”Then Israel entered the picture this Tuesday. “According to current and a former American official..., the classified intelligence that President Trump disclosed in a meeting last week with Russian officials at the White House was provided by Israel,” wrote the Times. A caveat: “Israeli officials would not confirm they were the source.” There the story ends, there is no new information and the hundreds of reports on this story all go back to the same current and former officials.The outlier is an article at Buzz- Feed on Tuesday that goes beyond anything other media discovered.“Two Israeli intelligence officials confirmed to BuzzFeed News that Israel had shared specific intelligence with the US regarding ISIS plots to smuggle explosive laptops onto places.”Buzzfeed reported that it had relied on an “official in Israel’s Ministry of Defense” and an intelligence officer who spoke “via encrypted app” from a “military base in northern Israel.”That Israelis were “boiling mad and demanding answers.”So why did the Israeli media miss these local sources who “confirmed” this story? No one close to the government seems concerned or willing to speak even anonymously. One could conclude they remain mum for fear of scuppering Trump’s visit or because they want to preserve the close relationship with the Americans. But the US-Israel intelligence relationship has survived worse scandals, such as the Jonathan Pollard affair.What if the stories about a spy’s life “hanging in the balance” are exaggerated? The laptop ban on flights from Middle Eastern countries went into effect in March and a possible European ban is being discussed. The agent discovered the laptop plot months ago; why is his or her life only threatened now? This old intel was already shared with Middle Eastern and European states, and the Russians know as well.If the laptop spy is not what Trump passed on, what are these sources talking about? Al Jazeera’s Ali Younes quoted a former CIA officer skeptical of “Israel’s ability to obtain highly sensitive intelligence of this nature about ISIS. If it was the Jordanians or the Turkish intelligence services who have done that, it might make more sense.” On Wednesday Reuters couldn’t find Israeli sources to confirm the story.The Israeli sources that BuzzFeed quoted appear not to have had the high level access to confirm details of the story. The US officials who were the source of the story don’t seem to have more information on it. So what was this all about? Is it designed to make ISIS suspicious of its own people? Is a spy’s life really in danger? Beyond a known laptop plot, what did the Russians learn? Does it overshadow Trump’s visit? Why doesn’t Israel seem to care? We’re left with a tautology: We don’t know what we don’t know.When media rely on anonymous sources with unclear or exaggerated access, we are left with more questions than answers.