IFCJ to expand its aid to Beduin sector by NIS 1.1 million

The announcement was made during a visit last Tuesday of IFCJ representatives, headed by the Fellowship's founder and director Rabbi Yechiel Eckstein. 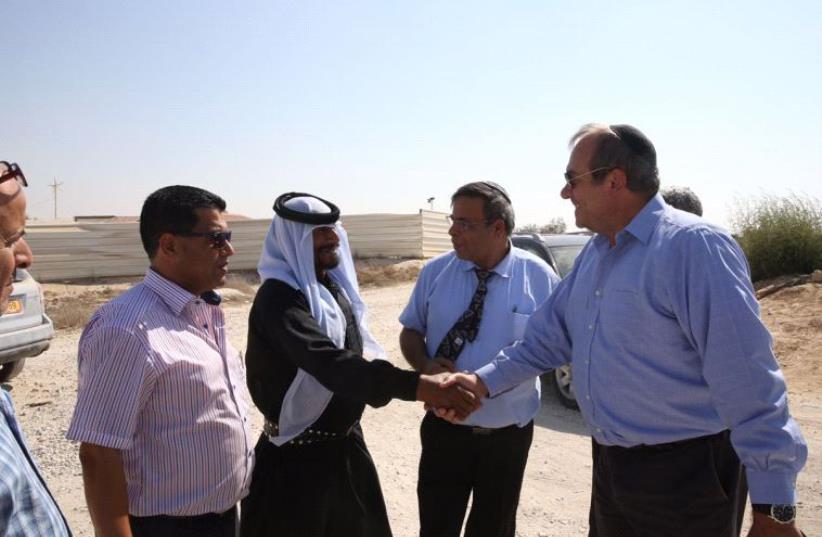 RABBI YECHIEL ECKSTEIN meets local leaders of the Beduin communities of Hura and Um-Batin last Tuesday.
(photo credit: COURTESY IFCJ)
Advertisement
The International Fellowship of Christians and Jews has announced plans to expand its aid program to the Beduin sector by NIS 1.1 million annually. The expansion comes in addition to the IFCJ's NIS 3.6 million yearly to support social welfare programs in the Beduin community. The announcement was made during a visit last Tuesday of IFCJ representatives, headed by the Fellowship's founder and director Rabbi Yechiel Eckstein, to the Beduin villages of Hura and Um-Batin, in the Negev. IFCJ members met with the heads of local Beduin municipalities, together with the Education Ministry's director for the Beduin sector and IDF representatives from the Beduin community. The additional support announced by the Fellowship will be provided within the framework of three different programs. The first will be the launch of two ambulances, set to operate in Bir-H'adge and in Segev Shalom, the purchase of medical equipment for young Beduin Magen David Adom medics, along with funding the training of additional medics. According to data obtained by the IFCJ, the Beduin community suffers from a severe shortage of ambulances, which causes a large number of fatalities that otherwise could have been avoided."Many patients from the Bedouin community who need to be rushed to the hospitals within minutes, often find themselves with no means of medical evacuation," said Sapuan Marich, director of the Non-Jewish Sector in the IFCJ, "This often causes a tragic loss of life which could have been avoided had there were ample ambulances to serve them." As mentioned, along with the launch of two additional ambulances, the aid expansion will also provide funding for the purchase of medical equipment for Bedouin Medics. In total, the emergency medical aid program is in the sum of 500,000 NIS. The second program to be launched is aimed at assisting Beduin youth enlisting in the IDF. As part of this aid, the IFCJ will grant every Beduin soldier a gift, in the form of a Kitbag and full personal gear, given to them on the day of they are drafted. This comes in light of recent statistics showing that each year about 450 Beduins volunteers to the IDF, including 150 soldiers from Beduin communities in the South. In total, about NIS 75,000 worth of equipment and military gear will be provided as part of this program. The third program is a scholarship for Beduin students who either served in the IDF or volunteered in the state's National Service program. As part of this aid program, some 50 annual scholarships will be given to Beduin students totaling NIS 500,000 a year."In contrast to the aid many Jewish Israeli students enjoy from, Beduin students --  who often come from homes lacking the means to financially assist them in funding their higher education -- don't enjoy such aid and so are left with no choice but to give up on becoming students," said Marich. "With this aid program, we hope to reignite their hope to acquire higher education and fulfill their potential."The three new initiatives come in addition to the Fellowship's ongoing program within the Bedouin community operating throughout this year. Amongst them are "With Respect and Dignity," a nationwide program in which impoverished Beduin elderly receive food packages; The Friendship Fund, a nationwide program operating in 200 municipalities in the South in which the IFCJ provides all departments of social services with a flexible budget to use when working directly with needy citizens and holiday grants given by the Fellowship on Ramadan and Passover. In total, the IFCJ will provide aid to the Beduin sector in the South totalling NIS 3,600,000, it said. "The IFCJ is working towards strengthening all members of Israeli society, in cooperation with the various government ministries and branches, local municipalities and social organizations," added Eckstein. "We believe the Beduin community is an inseparable part of Israeli society and it's our duty to help all Beduins integrate into Israeli society as best as we can. By expanding our aid within the Beduin community in the South, we hope to do just that, and pave the way for their full integration."