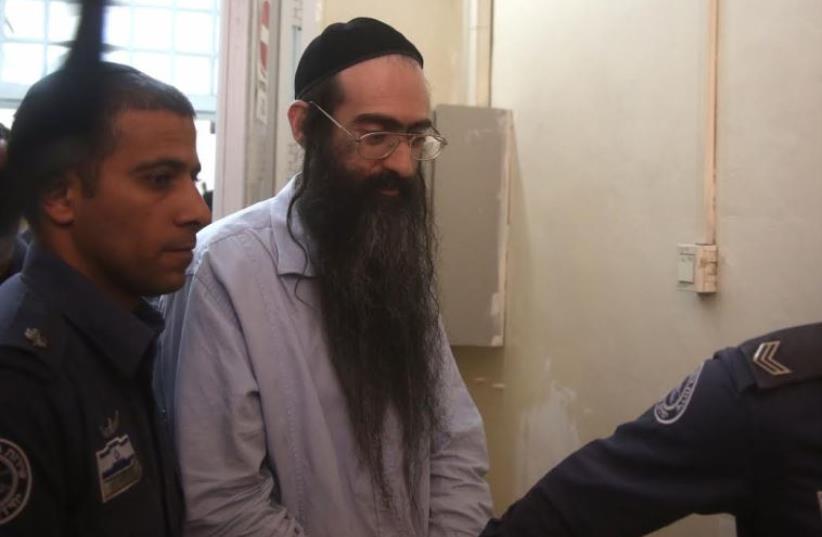 Yishai Schlissel
(photo credit: MARC ISRAEL SELLEM/THE JERUSALEM POST)
Advertisement
Convicted killer and religious zealot Yishai Schlissel, who was sentenced to life imprisonment last month for stabbing Shira Banki to death at last year’s Jerusalem LGBT Pride Parade, was rearrested in prison for conspiring with his brother to plan attacks at Thursday’s LGBT march.Hours before the controversial annual procession is scheduled to begin at Liberty Park, police spokeswoman Luba Samri said Schlissel was detained on Wednesday after evidence surfaced that he was working with his brother, Michael, to carry out attacks in his stead.“As part of targeted police evaluations of the Gay Pride Parade in Jerusalem, Jerusalem Central Unit investigators arrested Schlissel, who is serving a life prison term for the murder of Shira Banki and wounding six others during last year’s parade,” Samri said.“According to the information and the evidence accumulated… Schlissel planned with his brother, Michael, to harm the Jerusalem Pride Parade participants and to disrupt the parade.”An arrest warrant was granted on Wednesday by Jerusalem District Court, and Schlissel was rearrested in his prison cell and taken for questioning by investigators, Samri said. His brother was also arrested on Wednesday.During their arraignments at Jerusalem Magistrate’s Court, a judge extended both brothers remand until Sunday.Jerusalem District Police Commander, Major General Yoram Halevi, praised investigators for their actions.“We have foiled and prevented their plan to harm human lives during the parade,” Halevi said in a statement.“The parade will take place as planned and unchanged. We intend to enable the general public to exercise their freedom of expression and protest as part of the democratic character of the State of Israel.”Hundreds of officers from various units will be on hand to secure the parade in downtown Jerusalem, amid heightened concerns of another attack.Schlissel, who was released from prison days before last year’s parade for carrying out a similar attack 10 years earlier, had publicized his intent to harm participants before his rampage, resulting in widespread condemnation of the police.
​
Advertisement
Subscribe for our daily newsletter