Bennett to artists: You do not get it 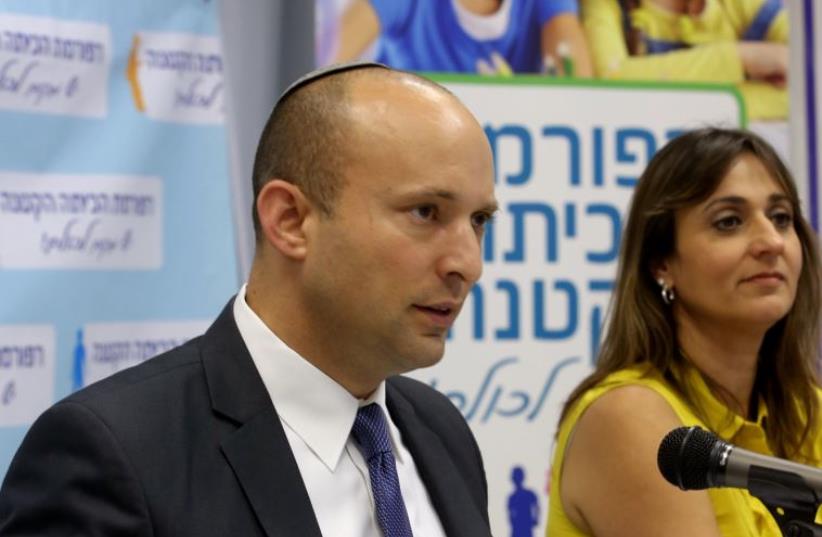 Education Minister Naftali Bennett announces small classroom reform
(photo credit: SASSON TIRAM)
Advertisement
Following a disagreement over the play A Parallel Time and its place in the culture basket, Education Minister Naftali Bennett reaffirmed on Tuesday evening that he was not extending the contract for Dr. Bilha Blum, head of the Education Ministry's Repertoire Committee.After the decision was made public last week, Bennett received a letter, signed by various members of the performing arts in Israel. The letter, which was made public in Haaretz, accused Bennett of making the decision based on "foreign considerations" and further accused him of involving "political considerations" in his decision to override the committee's decision regarding the play A Parallel Time.In response to this letter, Bennett wrote a public Facebook post on Tuesday evening:"Dear artists, you simply do not get it, so I will explain as clearly as possible," the minister wrote."The Culture Basket [Repertoire] Committee at the Education Ministry decides which plays/movies etc will be seen by the children in Israel. I entered my position and discovered that the committee had decided to send pupils to the play A Parallel Time that portrays in a humane light a terrorist who abducted, murdered and tortured an IDF soldier.""This is blatantly un-educational and a black flag hangs over [this decision]."Bennett went on to explain that he turned to the committee to ask them to remove it from the culture basket, to be told that they hadn't known it was about the terrorist in question.The play has been in the headlines for months since it was first brought to the attention of the Haifa Municipality in April by the family of Moshe Tamam, the IDF solder who was murdered by Walid Daka, the Palestinian terrorist who serves as the inspiration for the play. Daka is currently serving a prison sentence for his crime.The play is a story based on Daka's life in jail, and depicts his attempt to build a traditional oud - a musical instrument - for his wedding. It is described on the program as "trying to explore the meaning of a man being a prisoner, exploration that concentrates on attempting to discover the man inside the prisoner and not the cliché that makes them symbols and statistics and forgets that they are humans and they have their stories and their lives."The program, accessible online, also clearly states that the play is inspired by the life of Daka.Bennett, in his response to the letter, stated that he doubted that the committee had not known the play had been inspired by Daka's life, "but still, I gave them a chance to correct. Sometimes mistakes are made. It happens.""Despite my appeal, the [culture] basket [repertoire] committee convened again and decided unilaterally (!) to leave the play in the basket. So I simply took the play out of the basket myself, and now the Israeli children don't see it anymore," said Bennett, referring to his decision in early June to override the committee's decision and remove the play from the culture basket so schools would not sent students to see the play as part of a state-funded school trip.Bennett continued to explain his decision not to extend Blum's contract:"I also decided not to extend the term of the chairwoman of the committee, who demonstrated a deep lack of educational judgement. That is the consideration. It is an educational consideration, not a "foreign" consideration, because I am responsible for the education of Israeli children."He emphasized that "my decision to replace the chair of the committee is final. Artists' petitions, demonstrations and interviews will not change it. I will continue to utilize educational and moral judgment in the future, because that is why I was elected. That is all."