Prime Minister Benjamin Netanyahu with Mexican Secretary of Economy Ildefonso Guajardo Villarreal, September 14, 2017.
(photo credit: AVI OHAYON - GPO)
Advertisement
MEXICO CITY – Prime Minister Benjamin Netanyahu backs legal changes that will enable the security cabinet, rather than the full cabinet, to approve military campaigns, he said here on Thursday morning.Netanyahu stressed in comments to reporters after meeting 10 leading Mexican businessmen that this structural change is necessary to deal with the changing nature of military challenges, and not linked to any specific action that is planned.The prime minister, who arrived in Mexico City late on Wednesday night, said in response to a question about a report that the US intends to extend sanction relief for the Iranians, that he will speak about Iran with President Donald Trump in New York next week.Netanyahu began his day in Mexico City with two economic events, and said that it was not a coincidence that he opened his visit by meeting some of the country’s most influential businessmen, since the thrust of his time here is trade and investment. 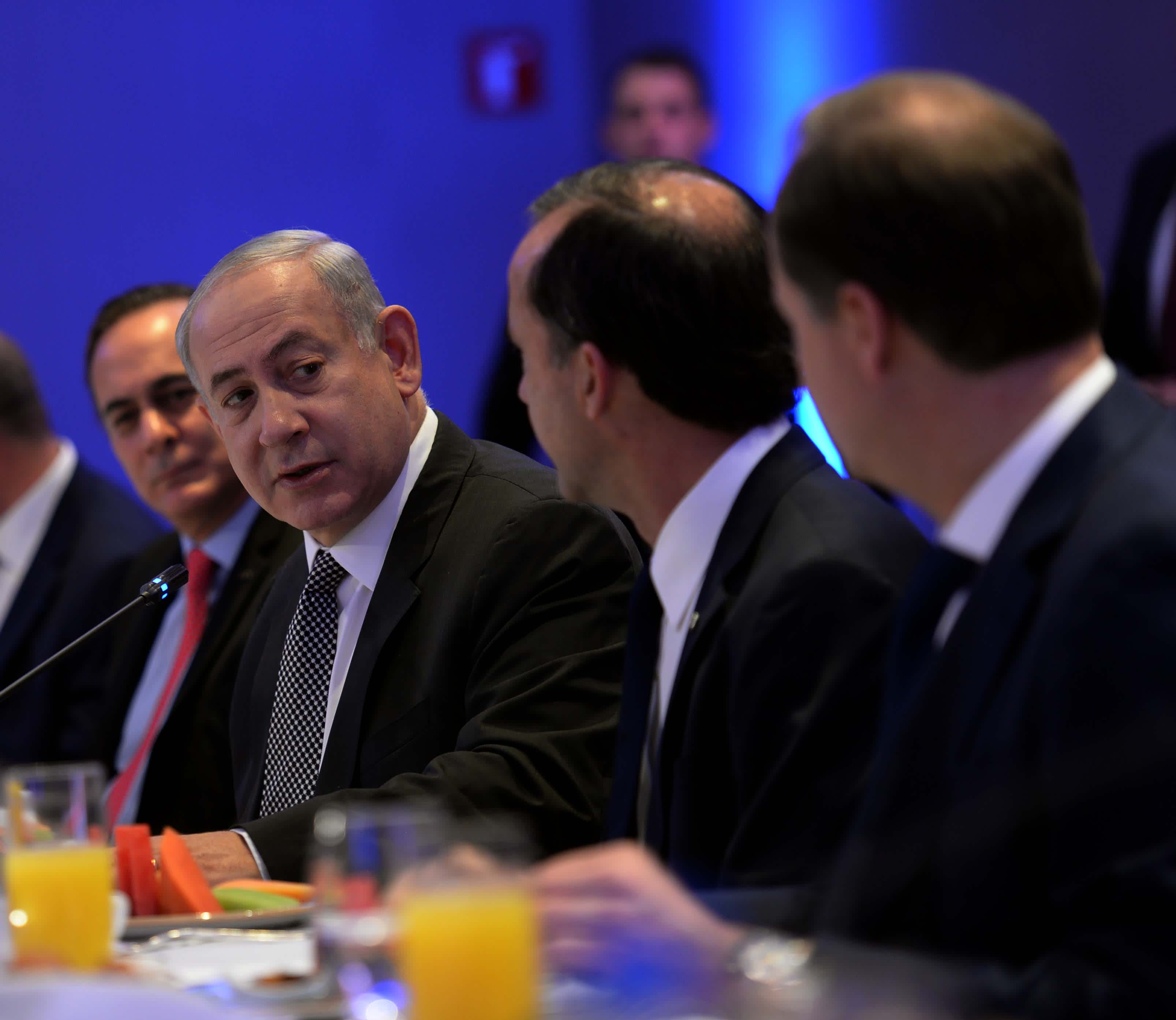 Prime Minister Netanyahu is speaking with the top businessmen of Mexico. (Avi Ohayon/GPO)
“Mexico is an economic power, one of the 12 largest economies in the world, and it can go higher. We have to be here, and be here in a big way,” he said.Following the meeting with the businessmen, Netanyahu went to meet with Mexican President Enrique Peña Nieto in the afternoon, and he said that the focus of that meeting will also be business.Some 150 Israeli firms are currently present in Mexico, and the objective is both to significantly expand that number and to encourage additional investment in Israel.Netanyahu arrived in Mexico from Bogota, where President Juan Manuel Santos highlighted that Israel offered its expertise in the “very humanitarian” effort of helping Colombia clear its countryside of anti-personnel mines. Santos met with Netanyahu at the palatial Casa de Nariño presidential residence in the city.After Afghanistan, there are more anti-personnel mines in Colombia – which is just emerging from a 52-year war between the government and the Marxist-Leninist FARC terrorist organization – than any other country in the world, he said. An estimated 25,000 people have been killed by these mines over the last 25 years.Last September, a week after the signing of the historic agreement between the government and FARC that earned Santos a Nobel Peace Prize, an eight-member delegation arrived in Israel to receive instructions from the Defense Ministry’s National Mine Action Authority.“Your country has been a friend and ally of Colombia, and recently a great ally in the construction of peace in the country,” Santos said. “We would like to strengthen this magnificent relationship.”Netanyahu arrived in Colombia late on Wednesday afternoon for a three-hour visit that Santos said was greatly appreciated.“We are honored to have you visiting here, and are grateful you have chosen Colombia as one of the countries in your first visit to Latin America,” he said.Santos said that Colombia can learn from Israel how to channel and tap into the innovation of its people.The president acknowledged that Israel and Colombia have worked closely in the past on security matters, and that there is an interest in strengthening that cooperation.Netanyahu – who was in Bogota for one night some 30 years ago as Israel’s ambassador to the UN – said that the relationship between the two countries has been a “remarkable” alliance.Israel was “excited” about the “post-conflict” possibilities for cooperation: first in agriculture, secondly in water management, and thirdly in the area of cyber security, the prime minister said. He announced a project whereby a number of Colombians will come to Israel to learn about the field.Regarding Colombia’s agricultural needs, the country is keen on assistance in replacing with other crops the coca plant that was widely grown in areas under FARC control and is responsible for much of the world’s cocaine.As he did in all his public speeches in Argentina, Netanyahu also highlighted Iran’s spread of terrorism around the world.The threat of radical Islamic terrorism, he said, “has created new relations between Israel and the Arab states, which no longer see Israel as an enemy but as an essential ally against these forces who seek to bring humanity back from a brilliant future to a barbaric one.”Iran, he said, “is sending its terrorist wings in all directions, including to Latin America.We believe that all countries should unite, just as Israel cooperates with the Arab states in order to prevent the spread of Iranian aggression and terrorism to other continents.”Colombia was the second-leg of Netanyahu’s three-country Latin American tour, before going to the US on Friday, where he is scheduled to meet with President Donald Trump on Monday, and address the UN General Assembly on Tuesday.Netanyahu met briefly at Bogota’s airport with representatives of the small Jewish community and some non-Jewish supporters of Israel.