In North and South, IDF’s ‘Pere’ platform can hurl Tamuz missiles at targets 30 km away

According to a senior officer from the Artillery Corps, during last summer’s Gaza war, the Pere fired 433 missiles at Hamas and Islamic Jihad targets in Gaza. 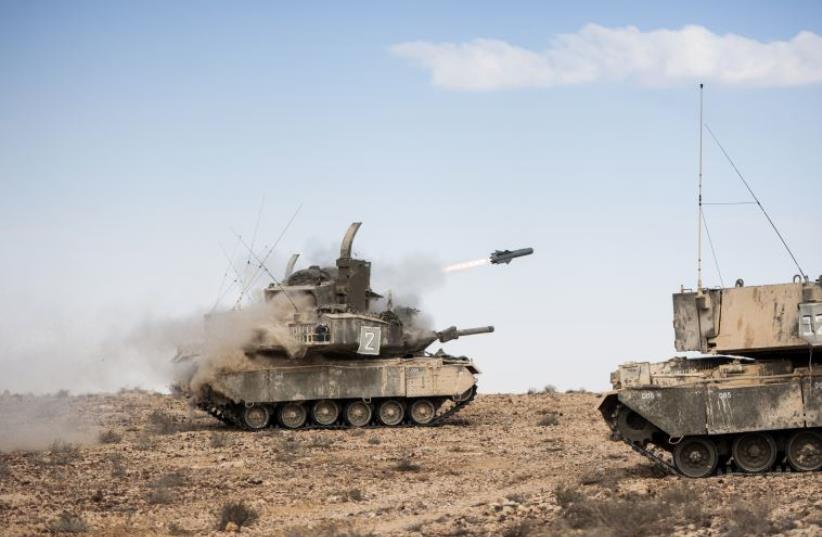 A TAMUZ missile flies through the sky
(photo credit: IDF SPOKESPERSON'S UNIT)
Advertisement
On Israel’s southern and northern borders, the IDF Artillery Corps deploys a platform that looks like a standard tank from the outside, but is in fact an armored guided-missile launcher that can strike enemy targets up to 30 km. away.The Pere platform, which was converted from the M48 (Magah) tank by Rafael Advanced Defense Systems, has been in existence since the early 1980s, when it was deployed to meet the threat of massive Syrian tank formations. But it is only now that the IDF is prepared to officially acknowledge it.According to a senior officer from the Artillery Corps, during last summer’s Gaza war, the Pere fired 433 missiles at Hamas and Islamic Jihad targets in Gaza.At no time did the Pere cross the border into Gaza, as all of its targets were within range of its Tamuz guided missiles. The platform consequently offered vital supporting precision fire to infantry and armored units that had moved into the Strip to destroy Hamas cross-border attack tunnels.The IDF Northern Command has in the past called on the Pere to strike targets in Syria, in response to cross-border fire or terrorist attacks launched by Hezbollah or Assad regime military forces.Previously, in Operation Cast Lead of 2008-2009, the Pere fired 26 missiles, and in the 2006 Second Lebanon War it launched 527 Rafael-made Tamuz missiles.Despite being designed to tackle invading Syrian tanks, the IDF developed new surface-to-surface strike roles for the Pere to deal with a host of threats, from semi-state terror organizations Hezbollah and Hamas to the remnants of the official Syrian military.According to the source from the Artillery Corps, the Pere can strike rapidly appearing and disappearing enemy targets that must be destroyed within a short time of being detected.“The targets we seek to strike are small, and remain for little time. We don’t have much time to hit them,” he said.The Pere’s fire control computer has been linked up with the IDF’s Torch command and control system, enabling it to receive data on the location of hostile targets from a range of sources, such as frontline infantry units, lookouts, aircraft, tanks maneuvering in enemy territory, and radars.The vehicle can be armed with a Rafael- produced Tamuz 2 missile which has a range of 15 km., a Tamuz 4 missile with a range of up to 30 km., or a Tamuz 5, which is like the Tamuz 4, but has upgrades to its electro-optical payload, giving it better day and night abilities, and the option of integrating a laser-guided warhead, a source from Rafael said.The Tamuz 5 is a part of Rafael’s Spike family of missiles.After being fired, the Artillery Corps officer explained, the missile broadcasts real-time visual information to the gunners in the Pere vehicle. It remains under the control a guided navigation system controlled manually by the gunners, who ensure that the missile hits its targets, before being able to launch a new missile if necessary.The first time a Pere platform fired a Tamuz in combat was in 2005, in response to a Palestinian terrorist attack from the Gaza Strip.“It is fully armored, like a tank,” said the source.Until now, it has provided its extraordinary firepower from within Israel, but “the Pere can cross the border with maneuvering forces if needed,” the source added.