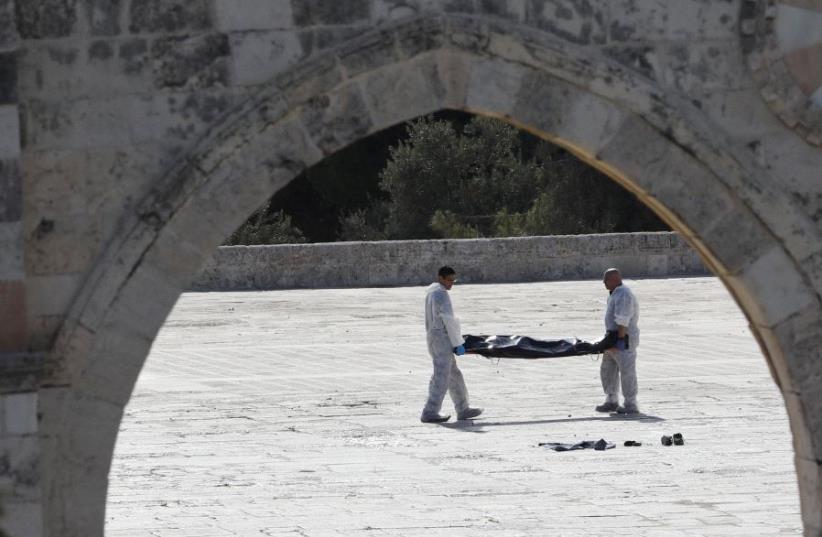 Israeli police remove assailant from Temple Mount compound
(photo credit: AMMAR AWAD/REUTERS)
Advertisement
Early Friday morning, three terrorists attacked a group of Israeli policemen at the Temple Mount, injuring two and killing two. The deceased policemen have been identified as Druse officers Kaamil Shanan and Hail Stawi. The terrorists, Israeli Arabs, were shot and killed by police on-site.
Officer Shanan, from the northern town of Hufeish, was the son of former Labor MK Shakib Shanan. Officer Stawi, from the town of Maghar, had recently become a father.
Officer Hail Stawi (credit: Israel Police)
In response to the attack, the Israel Police closed the Temple Mount, thus canceling Friday prayers, which are traditionally attended by thousands of Muslims. The gates to the Old City were sealed as well.
An Israeli border policeman outside the gates to the Temple Mount (Credit: Ammar Awad/ Reuters)
In response, various Palestinian leaders - religious and secular alike - condemned the Israeli decision to close the compound for the day, and encouraged constituents to visit the compound. As the worshipers were unable to enter the Old City, they congregated in the streets outside it, praying there instead.
Muslims pray outside the Old CIty of Jerusalem (credit: Marc Selem/ The Jerusalem Post)
In the hours after the news of the attack broke, various Israeli officials have offered statements condemning the terrorist's actions. Both Culture Minister Miri Regev and Public Security Minister Gilad Erdan have suggested reviewing the status quo at the Temple Mount as a way to prevent further attacks. During a phone call with Prime Minister Netanyahu, Palestinian Authority President Abbas condemned the attack.
A Muslim worshiper exist the Temple Mount compound atfer its closure follwoing a terror attack (credit: Ammar Awad/ Reuters)
Despite anger from Muslim worshipers on the ground, no violent protests have been reported in the aftermath.
Israeli security forces assist an older Muslim man in Jerusalem (credit: Thomas Coex/ Reuters)
The US Consulate General in Jerusalem put out a notice banning American government officials and their families from entering the Old City until Saturday morning at 8 a.m.