In rare move, police ask for public to help them find suspects in Duma attack

Security services suspect that Jewish extremists were behind the firebombing of two family homes in the Palestinian village. 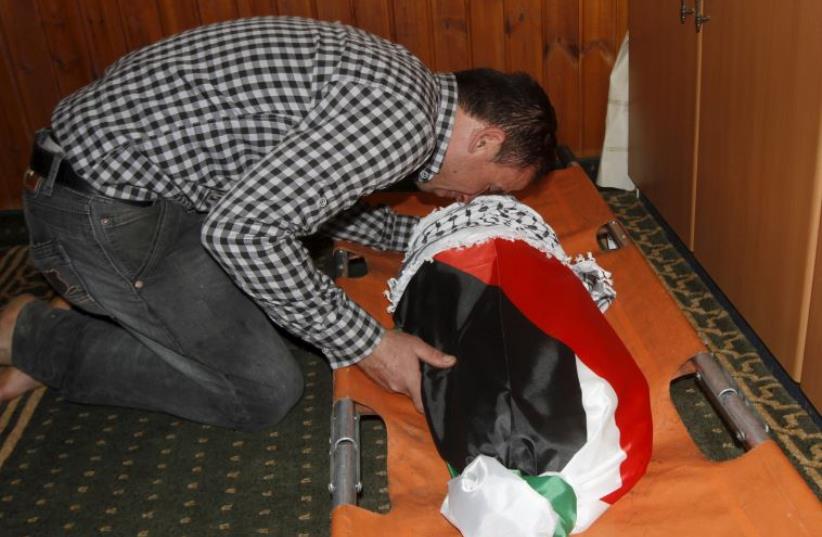 A relative of 18-month-old Palestinian baby Ali Dawabsheh, who was killed after his family's house was set on fire in a suspected attack by Jewish extremists, mourns over his body during his funeral in Duma
(photo credit: REUTERS)
Advertisement
The Judea and Samaria police district on Tuesday asked the public to help them find those responsible for the murder of a Palestinian infant in an arson attack in the West Bank village of Duma last week.The phone number to call with tips is 050-838-6626, from 8 a.m. to 10 p.m.Pressed by reporters on Tuesday, the district’s spokesman said that the announcement does not mean that the investigation has hit a wall and is no different from the police asking the public for help finding missing persons, or to help solve hit-and-run accidents.It is nonetheless very rare for the police to issue such a request in a murder investigation, especially a nationalist crime being investigated in collaboration with the Shin Bet (Israel Security Agency) and which is covered by a gag order.The security services suspect that Jewish extremists were behind the firebombing of two family homes in the Palestinian village of Duma north of Ramallah early Friday morning. In the arson of the house belonging to the Dawabsha family, 18-monthold Ali Dawabsha was burned to death and both his parents and four-year-old brother remain in critical condition.On Tuesday, the Shin Bet arrested a second far-right figure, a day after arresting rightwing activist Meir Ettinger on suspicion of involvement in an extremist Jewish organization.The latest arrest was of Evyatar Slonim, who has been under a court order banning him from traveling to the West Bank and Jerusalem, the Shin Bet said.Slonim, too, is suspected of bing active in a “violent extremist Jewish organization,” the intelligence agency said.On Monday, a security source said Ettinger, the grandson of Meir Kahane, was suspected of being part of an “extremist infrastructure,” but declined to say whether the arrest had any direct link to the deadly arson attack on a Palestinian home in the village of Duma last week.In a July 30 blog post on the website Hakol Hayehudi (The Jewish Voice), Ettinger – responding to the Shin Bet arrest of the arsonists who were allegedly behind the June attack on the Church of Loaves and Fishes in the North – wrote, “This impulse of the Shin Bet to create an atmosphere and make up displays as if there is an ‘organization’ that it exposes, explains to us well what the Shin Bet understands so well and is so afraid of... the Shin Bet understands that the activities they chase after... simply grow out of the ground from the most basic and popular understandings that cause people to feel that they need to do something.”He added, “There is no [Jewish] terrorist organization, but there are lots and lots of Jews, much more than what they think, whose ladder of values is completely different from that of the High Court of Justice or the Shin Bet.”.