In the footsteps of his two fathers

Uzi Dayan and his wife, Tamar, came to Belarus for the first time to see the town where his father, Moshe Rabinowitz, was born. 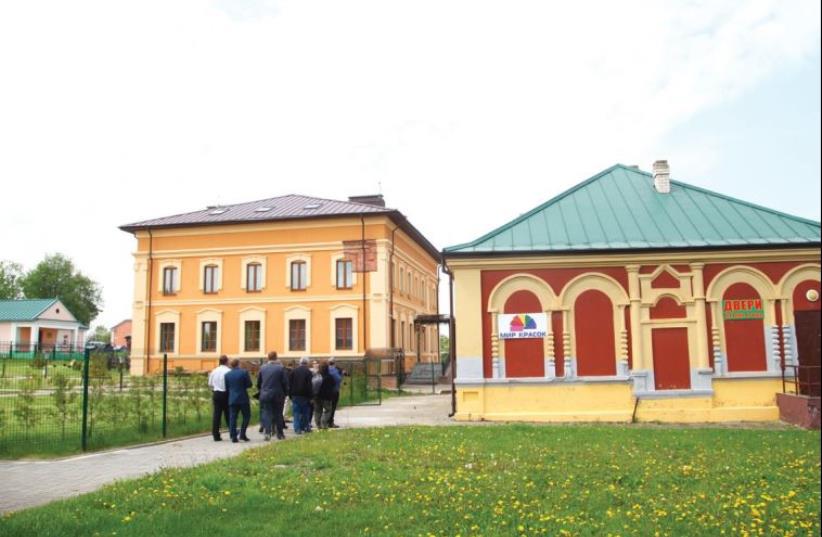 MAJ.-GEN. (RES.) UZI DAYAN (last in line) visits the old synagogue in Mir, Belarus
(photo credit: Courtesy)
Advertisement
“He never talked about his family or his life here, and coming to visit was not an option,“ Maj.-Gen. (res.) Uzi Dayan says as we arrive in Mir, Belarus.Mir, 85 km. southwest of Minsk, has a population of 2,200 people today, but before the Second World War about 6,000 people lived here, and more than half were Jews. This trip is a part of the Limmud FSU conference being held for the first time in Minsk, the capital of Belarus. Approximately 700 Russian-speaking Jews came to the conference.Limmud FSU was created in 2006 by Chaim Chesler, a former treasurer of the Jewish Agency, and Sandra Cahn, a philanthropist from New York, to teach, empower and strengthen local Jewish communities as well as to influence the governments in the FSU.Dayan, a former IDF deputy chief of staff and head of the National Security Council, and his wife, Tamar, came to Belarus for the first time to see the town where his father, Moshe Rabinowitz, was born.“This visit for me is more than just an opportunity to visit the place where he grew up, but a strong longing for him, I miss him very much since he passed away 15 years ago.”Rabinowitz was one of Dayan’s two fathers. His birth father, Zohar “Zorik” Dayan, was killed in the Battle of Ramat Yohanan near Haifa in April 1948, when Dayan was only 100 days old. Two years later his mother remarried, to Moshe.Zorik and Moshe met before they knew that their destinies would be entwined.“They met in Italy where they were helping Jews come to Israel,” says Dayan. After Zorik died, Moshe came to a meeting for war widows, where Dayan’s mother met him for the first time and discovered he knew her husband.“One day I told Moshe that I want to change my last name to Rabinowitz, but Moshe forbid me to do so, saying I should respect my father, and since he is no longer alive he can’t object, so he did that for him,” Dayan remembers.The Mir Yeshiva in Jerusalem, the largest yeshiva in Israel, and its sister campus in Brooklyn, are named after the original Mir Yeshiva in Belarus. This yeshiva was established in 1813 and in its peak years had about 400 students. Many of the students were saved during the Holocaust with the help of the Japanese vice-consul in Lithuania, Chiune Sugihara, who issued transit visas for students and helped them escape to Shanghai.“I think if [Rabinowitz] knew I was here he might be upset with me, he never wanted to come back here and never talked about his life here and all that had happened to him,” Dayan says.At the age of 14, after a threeday hunger strike, Rabinowitz convinced his family to let him go to Israel. He left Mir and went to study in Ben Shemen, near Jerusalem, and to fulfill his dream of building the Jewish country. A year later, the Germans arrived in Mir and murdered the entire Jewish community.“Some of his family was killed here in the city, and others that ran to the forest and became partisans were also killed. His whole family was gone,” says Dayan, “I can’t imagine his feelings as a 14-year-old leaving his family and going to a new place all alone.”When he came to Israel, Rabinowitz spoke five languages; Polish, Russian, German, Yiddish and Hebrew. Dayan reflects on this cultural aspect of Yiddish and addresses the importance of keeping Yiddish alive in Israel.While visiting a museum in Mir and hearing Yiddish music being played in the background, he says – filled with emotion – “Israeli culture must include some [from] our mothers and fathers’ generations, if it be Yiddish or Ladino, we must keep it alive.”“Today there are no Jews living in Mir,” says Chesler.The old synagogue is now a stationery store and a driver’s ed office. The famous Mir Yeshiva is now the local post office. This void in Jewish life in the area is not all bad in the eyes of Dayan.“We will continue to mourn the loss of our people and their culture, but the place all Jews must live in is Israel.”Walking through a town so serene and calm cannot change the fact that less than a century ago, our people were killed here just because they were Jews.“Today anti-Semitism is changing from the hate of Jews alone to the hate of the Jewish country Israel, and we must remember our past,” says Dayan, at the end of a very emotional day.