Contract for MR-SAM missile defense system, yet to be signed, is worth $2.5 billion. 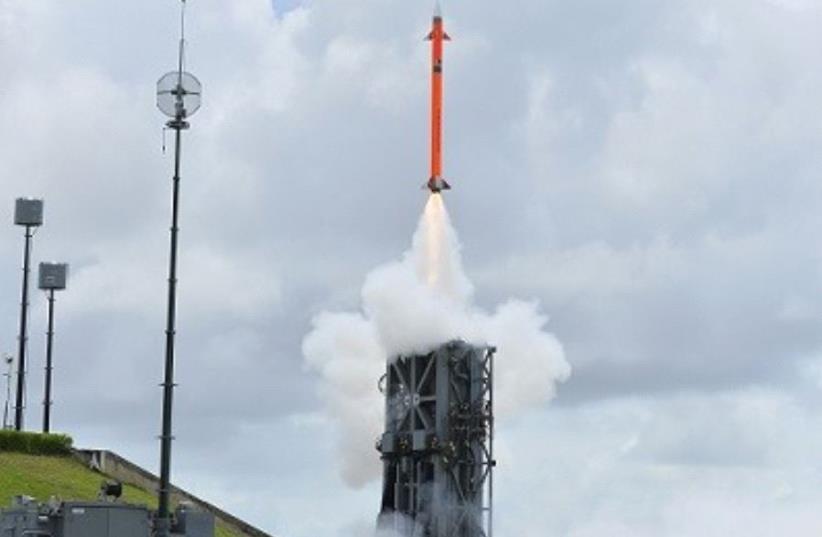 IAI successfully tests MRSAM Air and Missile Defense System
(photo credit: COURTESY IAI)
Advertisement
The Indian government has cleared a $2.5 billion deal for its army to buy a medium-range surface-to-air missile defense system from Israel Aerospace Industries, another step toward signing the contract, Indian media reported on Thursday.The MR-SAM system, jointly developed by India’s Defense Research and Development Organization in collaboration with Israel Aircraft Industry, is a land-based configuration of the long-range surface-to-air missile (LRSAM) or Barak-8 naval air defense system.India will use it to replace their country’s aging air defenses.The missiles are capable of shooting down enemy aircraft at a range of 50-70 kilometers.Each MR-SAM system includes a command and control system, tracking radar, missiles and mobile launcher systems. Missiles can be fired in single or ripple firing modes from a vertical position, launched in canister configuration. The launcher holds eight canistered missiles in two stacks. A radio frequency seeker can identify a target as “friendly” or belonging to an enemy.According to India Today, the Indian Army “will induct over five regiments of the MR-SAM missile, which will have around 40 firing units and over 200 missiles of the system.”Delivery of the first system will begin within 72 months of signing the contract and be deployed for operations by 2023.Following successful tests of the system in July, Israel Aerospace Industries president and CEO Joseph Weiss said, “The joint development and the extensive cooperation between the industries in both countries is a testimonial to the strong partnership between the two nations. IAI is proud to lead this impressive cooperation and is highly obligated to its continuing success.”India was the world’s largest importer of major arms from 2012 through 2016, accounting for 13% of global total – far greater than regional rivals China and Pakistan, according to the Stockholm International Peace Research Institute.Over the last five years, defense trade between the two countries has averaged more than $1b. annually.This year, Israel and India are celebrating 25 years of bilateral diplomatic ties. To highlight the growing bilateral relationship, Narendra Modi is expected to become the first Indian prime minister to visit Jerusalem on a trip planned for this summer.