Swaraj, 67, who served as foreign minister during the first term of Indian Prime Minister Narendra Modi from 2014 until earlier this year, passed away late Tuesday evening of cardiac arrest. 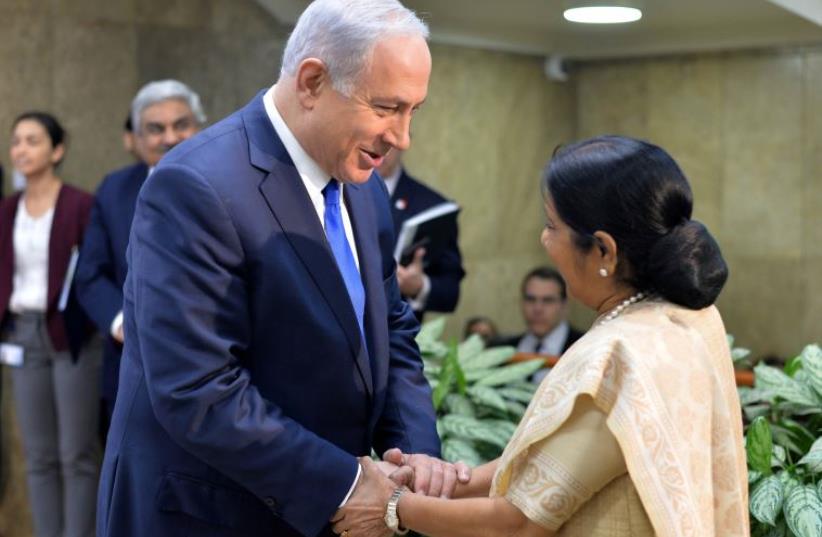 Indian External Affairs Minister Sushma Swaraj with Prime Minister Benjamin Netanyahu ‏
(photo credit: KOBI GIDEON/GPO)
Advertisement
Israel mourns the death of India’s former foreign minister Sushma Swaraj, who played a “big role” in the “remarkable progress” in the ties between the two countries, Ambassador to India Ron Malka said on Wednesday.Swaraj, 67, who served as foreign minister during the first term of Indian Prime Minister Narendra Modi from 2014 until earlier this year, died late Tuesday evening of cardiac arrest.Malka told the Indian ANI news agency that Swaraj’s death is a “big loss for Israel,” as it is for India. “She was a great friend of Israel,” he said.Former ambassador to India Daniel Carmon said that Swaraj articulated in the parliament in 2014 – and shortly afterward to an Arab League delegation meeting in India – New Delhi’s policy of “de-hyphenating” India’s relations with Israel and the Palestinians.He quoted her as telling the Indian parliament in July 2014, just two months after her BJP Party – with Modi at the helm – swept into power, that India supports “the Palestinian cause while maintaining good relations with Israel.”Under this policy, instituted by Modi, India’s relationship with Israel was to stand on its own merits, independent and separate from India’s relationship with the Palestinians. It would no longer be India’s relationship with Israel-Palestine, but India’s relationship with Israel and India’s relationship with the Palestinians.Prime Minister Benjamin Netanyahu termed this new policy “revolutionary” when he visited the country in 2018.Swaraj, who visited Israel as foreign minister in 2016, was recognized in Jerusalem as friendly even before she took office, having served from 2006 to 2009 as chairwoman of the Indo-Israeli Parliamentary Friendship Group. She visited the country in 2008, and praised Israel at the time for proving a “reliable partner” in India’s 1999 war with Pakistan.