Indonesian delegation to Israel: We are going to retell your story

Indonesian experts join others on visit that marks big step in the growing interaction between Israel and Muslim-majority states outside the Middle East. 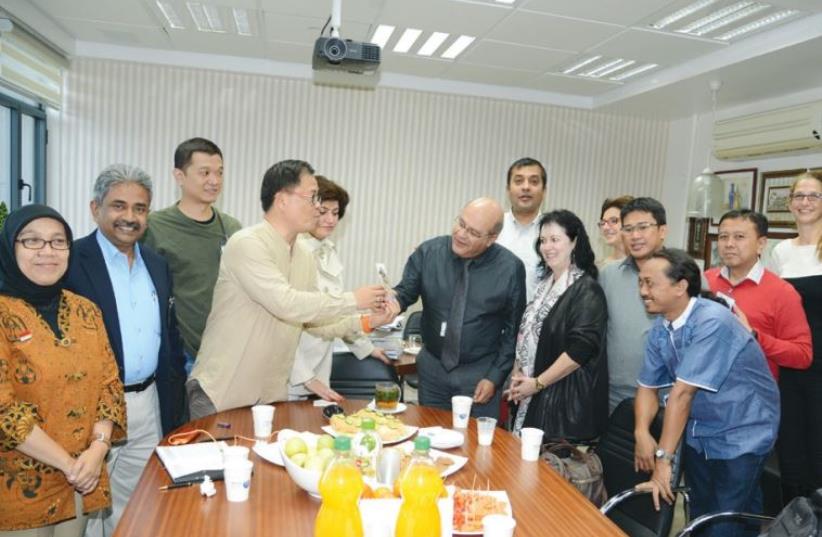 MEMBERS OF the Project Interchange delegation present Chezy Levy (center), CEO and medical director of Barzilai Medical Center, with a gift from Indonesia.
(photo credit: DAVID AVIOUZ, BARZILAI MEDICAL CENTER)
Advertisement
As Gadi Yarkoni, head of Eshkol Regional Council, finished an emotional account of his endeavors to protect his region in the face of Hamas rockets during 2014’s Israel- Gaza conflict, losing both his legs in the process, the room broke into applause.Yarkoni spoke to a group of disaster and emergency experts taking part in a six-day seminar in Israel. Victor Rembeth, one of six Indonesian emergency relief experts, followed Yarkoni’s words with a simple message: “We Indonesians are blessed with your story and we are going to retell it.”Individuals from India and Sri Lanka joined the Indonesian experts in a visit that marks a big step in the growing interaction between Israel and Muslim-majority states outside the Middle East.Organized by Project Interchange – an educational institution within the American Jewish Committee – the delegation traveled around the main areas impacted by Operation Protective Edge, from the Hosen Trauma Center in Sderot to the Barzilai Medical Center in Ashkelon.Despite the negative portrayal of Israel that the Indonesian delegation members frequently see in their local media, the opportunity to visit the country was highly appealing to them.Iswar Abidin, a disaster management consultant from Jakarta, revealed that his reaction to the opportunity of visiting Israel was one of disbelief.“It was very shocking, but immediately I said, ‘OK, let’s do it.’ I think it’s something new and challenging,” he said.Similarly, for Trinirmala Ningrum, secretary-general of the National Platform for Disaster Risk Reduction, all she had heard of Israel before her invitation to take part in the seminar “was war.” This view was one echoed time and time again by the Indonesian participants, the majority of whom were Muslim.Immensely humorous and eager to chat, they mentioned how they turned to “professor Google” to read up on Israel and Judaism in general. Though freedom of religion is permitted in Indonesia’s constitution, only six religions (Islam, Protestantism, Catholicism, Hinduism, Buddhism and Confucianism) are officially recognized, meaning that for many, knowledge of Judaism is limited to news about the Israel-Palestine conflict.The Indonesian contingent’s participation in the program stems in no small part from the efforts of Rembeth. As national manager of Disaster Resource Partnership Indonesia, he invited various colleagues from the disaster and emergency relief profession to attend.Though many turned the offer down, in Rembeth’s view the benefit of the seminar lies in how “things like this can work,” noting how the program’s “people-to-people approach” has the potential for engendering a change in relations between Israel and Indonesia.Accompanying the group was AJC Asia-Pacific Institute’s assistant director Nissim Reuben, who suggested that the reality of the delegation reflected the fact that “Asia is the new frontier for Israel and the global Jewish community.They don’t have the baggage of anti-Semitism that some European countries have. Most of these countries benefit from Israeli expertise in agriculture, water management, soil management and disaster mitigation.”The delegation’s visit to the Barzilai Medical Center proved to be eye-opening for the participants. The hospital’s CEO and medical director, Dr. Chezy Levy, explained the issues of running a hospital in the face of incessant rocket attacks, emphasizing his four key needs for dealing with any disaster: “cooperation, coordination, leadership, and training.” Upon leaving, Ningrum explained that she had “never heard the impact of the conflict from the Israeli side before.”Though only the second day of the seminar, the impact of gaining a different understanding of Israel was considerable on the participants. Muhammad Ali Yusuf, chairman of the Climate Change and Disaster Management Institution of the Nahdlatul Ulama (the largest independent Islamic organization in the world), said he hoped to organize an event where he can tell the Indonesian National Platform for Disaster Risk Reduction of their findings in Israel.Though Israel does not currently have any diplomatic relations with Indonesia, recent initiatives – such as the current week’s events and developments and the announcement of Israel establishing a diplomatic presence in Abu Dhabi last November – point toward a change in Israel’s relationships with countries that have previously refused to establish diplomatic ties.