An initial report by Economy Ministry safety administration revealed that the construction company building the lot, Danya Cebus, had a history of violations. 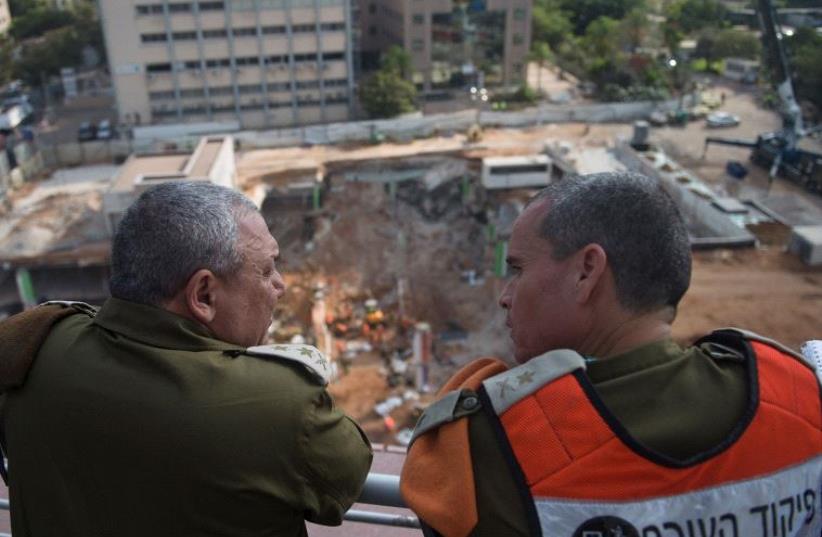 Scene of building collapse in Tel Aviv's Ramat Hachayal neighborhood
(photo credit: IDF SPOKESMAN’S UNIT)
Advertisement
A day after a parking lot collapse in Ramat Hachayal killed three people and injured over a dozen, tough questions concerning safety regulations are being met with unsatisfying answers.An initial report by Economy Ministry safety administration revealed that the construction company building the lot, Danya Cebus, had a history of violations.Although no safety defects were found on the site in question during a June inspection, Danya Cebus has had citations at several of its other work sites.Among them: It dismissed a crane operator that demanded fixing deficiencies that had been discovered; three work accidents took place over a short time period at a building site in Rishon Lezion, including one in which a 17-yearold fell while improperly wearing a safety harness; the company failed to comply with regulation for fencing off some construction sites; and its workers were discovered to have climbed ladders without proper safety equipment.Investigations had been opened into three of the company’s executives in the past two years, according to the ministry report.The company’s spokesperson said it was committed to following “stringent and rigorous” regulations in the sector, that it was cooperating with the investigation, and that protecting its workers was of paramount importance to it.Ya’acov Bloch, a professor in civil engineering at University of Ariel and owner of a small construction engineering firm, says poor regulatory enforcement is partly to blame.“As a matter of fact, the government can’t do their inspections properly because there are too many cases and it’s just too broad,” he said.Municipal inspectors, he added, have neither the skills nor the manpower to check the quality of construction, and are relegated to ensuring that building is not taking place out of bounds.Even then, he added, mistakes can occur both in the planning process, where an engineer might miscalculate something, or in the execution phase carried out by construction companies.Most incidents, he added, go unnoticed and unreported.“Every engineer is insured in their company against failures. If the engineer makes a mistake, and there is damage, the insurance company will cover the loss. But if there is bodily harm, there’s a criminal investigation, and the insurance probably won’t cover it,” he said.In other words, he surmised, regulators tend to overlook infractions unless there is bodily harm to a worker.“In Israel there are many incidents every year, but only a few of them or in the news because of fatal casualties. If it’s only monetary loss, it doesn’t get in the news,” he said.Attention may also be more focused depending on the identity and status of the worker. In construction, in particular, Israel relies on many foreign workers, including a large number of Palestinians.An August article published by activist Dr. Ruti Feuchtwanger in +972 magazine said that 22 foreign construction workers had died in accidents this year, and about 300 in the past decade.“The Ministry of Economy’s occupational health and safety administration has 17 supervisors with seven vehicles for a total of 13,000 constructions sites. It can take days before a supervisor arrives at a site where an accident has taken place,” she wrote.