"We must not allow such situations to get out of control and for violence to be used unnecessarily," says police commissioner.

By DANIEL K. EISENBUD
SEPTEMBER 18, 2017 18:10
Police detain an ultra-Orthodox protestor at a violent anti-conscription protest in Jerusalem, September 17, 2017.
(photo credit: MARC ISRAEL SELLEM)
Advertisement
One day after police violently dispersed an anti-conscription protest by ultra-Orthodox demonstrators in Jerusalem, hospitalizing at least three men, the police commissioner and public security minister condemned the officers’ conduct and recognized the need for an investigation into excessive force.The Sunday Mea She’arim protest outside an IDF conscription center attended by hundreds of haredim quickly developed into a violent melee when riot police responded to rock throwing and illegally blocked streets with water cannons and horse-mounted officers.The protest was organized by the fundamentalist, anti-Zionist group Eda Haredit after 40 ultra-Orthodox men, including the grandson of a prominent rabbi from the Toldos Avraham Yitzhak Hassidic community, were arrested for refusing to serve.Many demonstrators also came to protest this month’s decision by the High Court of Justice to strike down the law exempting ultra-Orthodox Jews from compulsory military service while they are studying at yeshivot.
Scenes from an ultra-Orthodox protest in Jerusalem, September 17, 2017 (Credit: Yisroel Cohen)
Although United Torah Judaism MK Moshe Gafni had issued a statement that Defense Minister Avigdor Lieberman had agreed to release the grandson for Rosh Hashana, the protesters refused to disperse until all the haredi conscripts were released from custody.Video footage of the clash shows police body-slamming, punching and kicking several men, some of whom were already detained. Three protesters were treated for moderate injuries, and nine arrests were made. At least one officer was treated for a light injury.After the plethora of footage surfaced in the media, the Justice Ministry and Police Internal Investigations Department said they would launch probes to determine culpability among the officers seen beating the demonstrators.During a Monday Rosh Hashana toast at National Police Headquarters in Jerusalem, Public Security Minister Gilad Erdan and Police Commissioner Roni Alsheich condemned what they deemed excessive force by police as “unacceptable.”“A police officer is permitted to use force when carrying out his duties. However, there is no excuse for losing one’s mind, as it seems was the case for some of the officers at Sunday’s protest in Jerusalem,” Erdan said.“And when there are cases that appear to be excessive force, there is a duty to review them thoroughly to make a correction.... These cases require an in-depth examination, and perhaps some soul-searching,” he said. 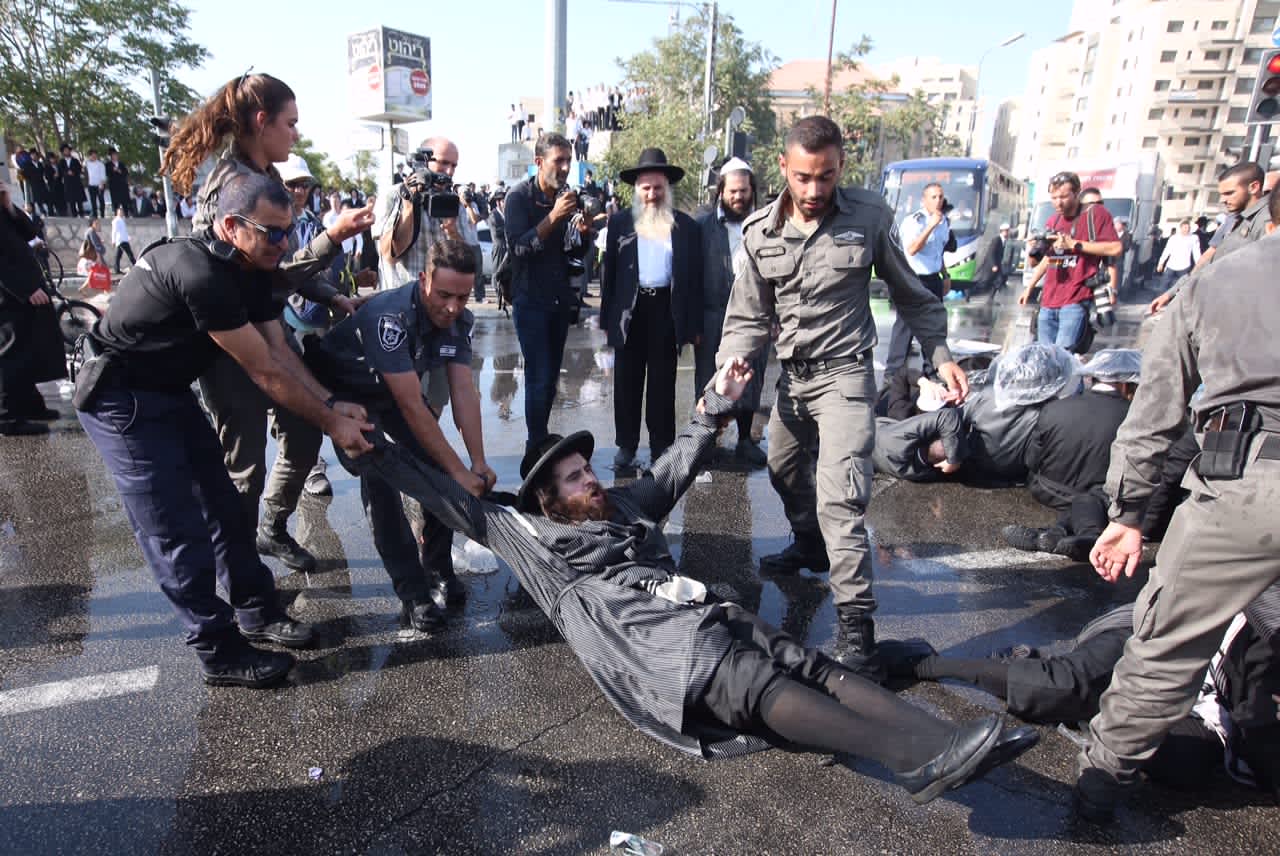 Israeli police breaking up an ultra-Orthodox protest in Jerusalem, September 17, 2017. (Marc Israel Sellem)While noting that several of the protesters threw rocks and other objects at officers, Erdan said violence against otherwise nonviolent participants cannot be tolerated.“It doesn’t justify beating a demonstrator who has already been detained and is lying on the ground,” he said.Despite conceding that dispersing crowds forcefully “never looks good,” Alsheich said the officers responsible for the unnecessary violence will be held accountable after a formal review of the matter.“I felt bad when I saw the videos [of the violence],” he said. “We must not allow such situations to get out of control and for violence to be used unnecessarily.”However, Health Minister Ya’acov Litzman was unequivocal in his denunciation of the police violence.“This was excessive force that endangers life and that is clearly unacceptable,” he said in a statement. “The disturbing documentation of police violence proves that beating ultra-Orthodox demonstrators has become a way of letting off steam for no reason by violent and dangerous police officers. The police must stop this behavior immediately to ensure public peace.”Police said that while the officers utilized multiple riot dispersal methods only after protesters became “exceptionally violent” by blocking roads, throwing rocks, and refusing to disperse, any disproportionate force will be reviewed by the Police Internal Investigations Department.“Police were forced to use crowd-control measures and arrest nine rioters in an attempt to prevent the continuation of this violent, illegal demonstration and the blockage of roads,” police said in a statement.Nonetheless, the statement noted evidence that excessive force “was ostensibly employed for purposes other than enforcement.”