US ambassador to Germany: ‘We must continue to squeeze the regime by denying it the money it craves to plan and implement these attacks.’ 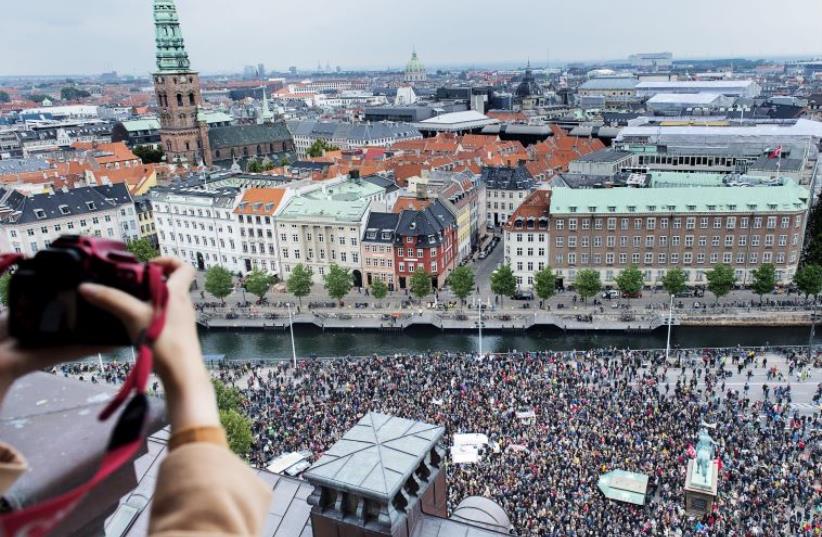 People show their support for refugees and migrants during a rally in Copenhagen September 12, 2015.
(photo credit: REUTERS)
Advertisement
Danish Foreign Minister Anders Samuelsen says Denmark will head efforts in the EU to discuss sanctions against Iran, after Copenhagen uncovered a plot directed from Tehran against dissidents.At a press conference on Tuesday, Samuelsen said that the Danish Security and Intelligence Service had taken the unusual step of disclosing the nature of the plot, making it “completely clear that the arrow is pointing at the Iranian intelligence service.”The unusually strong language from Copenhagen shows how seriously it is reacting to a plot that was first uncovered in late September and has involved a hunt for a suspect across Denmark, Sweden and Norway.But Denmark says words are not enough. The foreign minister made clear that “Iranian behavior is not limited to Denmark,” and that several other “like-minded” countries share Copenhagen’s concerns. Prime Minister Lars Lokke Rasmussen said that the UK is one of those countries and that together they expect to “stand up to Iran.”

I appreciate the support from my colleague @Theresa_May today. In close collaboration with UK and other countries we will stand up to Iran #dkpol pic.twitter.com/qfqFLf5tWP
— Lars Løkke Rasmussen (@larsloekke) October 30, 2018


This could open a division in the European Union as it seeks to facilitate payments for Iranian exports through a system designed to get around the US sanctions that come into place on November 4. EU foreign policy chief Federica Mogherini has been pushing for this system, and the EU has sought to assure Iran that it will stick with the Iran deal that the US walked away from in May. Iranian pro-government media expect the EU to play ball, but the Denmark plot may rock the boat.US Ambassador to Germany Richard Grenell told The Jerusalem Post that Iranian terrorist plots in Europe are increasing.“The intel cooperation from our allies has fortunately stopped the last few terror plans, but the Iranian regime isn’t yet deterred,” Grenell said. “We must continue to squeeze the regime by denying it the money it craves to plan and implement these attacks.”The US would like to see Denmark, as well as other countries affected by a plot in June – France, Luxembourg, Austria, Belgium and Germany – do more.Denmark says that it is concerned about Iran’s regional behavior, ballistic missile program and human rights violations.On Wednesday, the Middle East departments of EU states met in Brussels. Maja Kocijancic, Mogherini’s spokeswoman, said that the EU deplores “any threat to EU security and takes every incident extremely seriously.”According to Laurence Norman of The Wall Street Journal, Mogherini spoke to Samuelsen and expressed solidarity with Denmark. But it’s unclear what the EU-wide reaction is beyond that. Latvia’s Minister of Foreign Affairs Edgars Rinkevics tweeted support for Denmark, saying the EU needs to take “effective and united action.”


Iran’s Fars News Agency stressed Wednesday that the EU will continue to wait for more information about Denmark. An analysis by the same pro-government news agency argued that the “small country” of Denmark had targeted Tehran with news of this plot. It claimed that the US under President Donald Trump and Prime Minister Benjamin Netanyahu were working to sabotage EU-Iran relations.“Why, five days before the oil sanctions, does a European country seek sanctions against Iran in the context of the European Union?” the agency asked.The Mossad stands behind this information, the article claimed, noting that Israeli media had said the Mossad aided in Denmark’s efforts. Meanwhile, the Iranian foreign ministry summoned the Danish ambassador and accused Denmark of “rash allegations.” The Danish ambassador had been recalled by Copenhagen on Tuesday, so he apparently met the Iranians before leaving.The US would like to see the European states move faster in confronting Iran. US Secretary of State Mike Pompeo, speaking with Brian Kilmeade of Fox News on Wednesday, said that the US was working with European states to explain that what happened in Denmark is why the US and European states should have a “completely different policy with respect to Iran.”As the November 4 deadline looms, it doesn’t appear the Denmark plot will gather enough support across Europe for major action. The increasing attempts by Iran to operate in European countries shows Tehran also does not think the EU will go beyond words. Tehran has been embarrassed by the failure of two major plots against Iranian dissidents foiled in five months across Europe. It will likely try again.