Is Israel on the verge of freezing the isolated settlements?

Stating where settler building can occur and where it cannot would effectively create a gold list and a blacklist of Israeli settlements, a prospect the current government is loathed to consider. 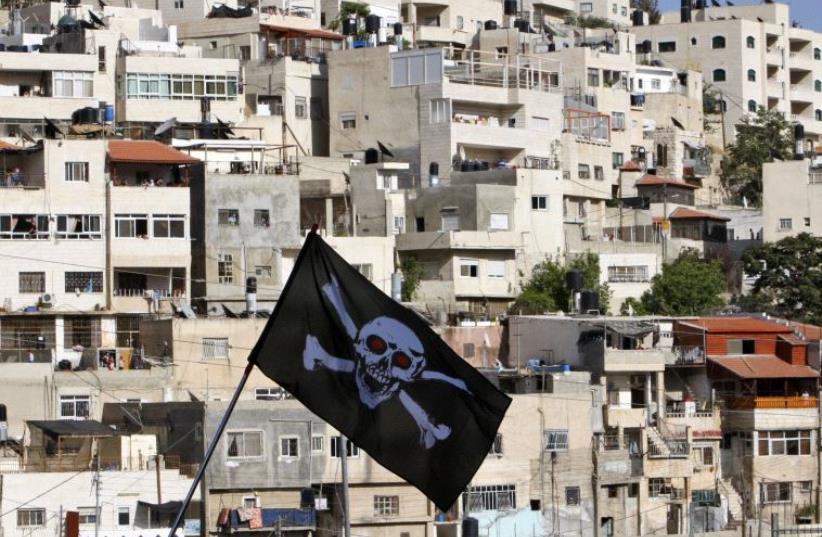 Protesters against Jewish settlement activity in the Silwan neighbourhood, outside the old city in Jerusalem hold a skull and bones flag
(photo credit: REUTERS)
Advertisement
Could the US and Israel be on the verge of the first understanding between the two governments of what is, and what is not, considered a settlement bloc? Since the concept was coined by former US president Bill Clinton, Israel has been loath to define the idea of a settlement bloc, lest it prejudice border negotiations with the Palestinians for a two-state solution.But, it may finally belooking at doing so within the context of President Donald’s Trump’s push to revive the frozen peace process.It’s presumed that blocs are high population areas in the West Bank, mostly near the Green Line, that will one day be part of Israel’s permanent borders, while Israel will withdraw from the isolated ones.
Trump tells Israel to "hold back on settlements" during meeting with Netanyahu at White House on Feb. 15, 2017 (credit: REUTERS)
This is a theoretical notion that becomes difficult when turned into concrete spots on a map, particularly if Prime Minister Benjamin Netanyahu agrees to freeze the areas outside the blocs, known as isolated settlements.Stating where settler building can occur and where it cannot in Area C would effectively create a gold list and a blacklist of settlements.The idea of the blocs, which Jerusalem often speaks about to justify certain settlement building projects, was effectively erased during the Obama era. That administration’s no-tolerance policy for any settlement activity made Israeli designation of the blocs meaningless.This was underscored by the international community’s ramped up opposition to all Jewish building in the West Bank in that same period.They see it as illegal. The Palestinians describe such building as a war crime and have submitted a complaint about it to the International Criminal Court.Defense Minister Avigdor Liberman revived the idea of the blocs in January, when he said it was possible to reach a deal with the US on the matter.Since then, it’s presumed that Netanyahu and his envoys have sought an understanding to this effect with the Trump administration as a possible formula to continue building while adhering to a US request for constrained activity.It would not be the first time that Netanyahu has imposed a partial freeze on settlement activity. In 2009, under pressure from the US, he issued a 10-month moratorium on all settler housing starts. But that edict was applicable to all settlements, and the one now under debate would favor some settlements over others.The frame of reference popularly used by Israelis to understand the settlement blocs is the route of the security barrier as it was set in 2006. Many Israelis believe that route will eventually become Israel’s final border and a number of politicians have said as much.Out of the 385,900 settlers who live in 129 settlements, some 296,027, or 77% of the population, lives within the barrier’s route in 55 settlements, according to data from the Central Bureau of Statistics for 2015.Out of the 77 settlements located outside the barrier, some 50 have a population of under 1,000 and another 16 have a population of only 1,000 to 2,000. Only 11 of them have a population of 2,000 to 7,313, out of which the largest settlement is Kochav Ya’acov.There are regions in Judea and Samaria – the South Hebron Hills, the Jordan Valley, the Megilot region near the Dead Sea – that are entirely composed of isolated settlements.Some of the isolated settlements have experienced dramatic growth rates under Netanyahu, especially Tekoa in Gush Etzion and Shiloh in the Binyamin region. The bulk of the communities, however, experienced only minimal growth.The bulk of the settler population within the barrier – 210,321 as of the year 2015 – is concentrated in nine settlements. All of them, save for Ariel, are presumed to qualify for the criteria of a settlement bloc. Ariel, with a population of 16,123 is one of the more contentious of the blocs, because it is located 16 km. over the pre-1967 lines.The other eight settlements include: Modi’in Illit, with a population of 64,179; Beitar Illit, 43,343; Ma’aleh Adumim, 37,525; Ariel, 18,717; Givat Ze’ev, 16,123; Oranit, 8,495; Efrat, 8,301; and Alfei Menashe, 7,638.If Netanyahu were to move forward with a freeze of the isolated blocs, he would be following a pattern that already largely exists.But, he would be doing so at a time when right-wing politicians, and the settler movement as a whole, is pushing him to erase such distinctions and allow for growth everywhere in the settlements.His task will be to come up with enough of a carrotand- stick incentive to sway the settlers to accept this plan or another so that he can put in place the construction restraints needed for Israel’s relationship with Washington.