Who is winning the court battle over America's anti-BDS laws?

Are the ACLU, activists beating them back? 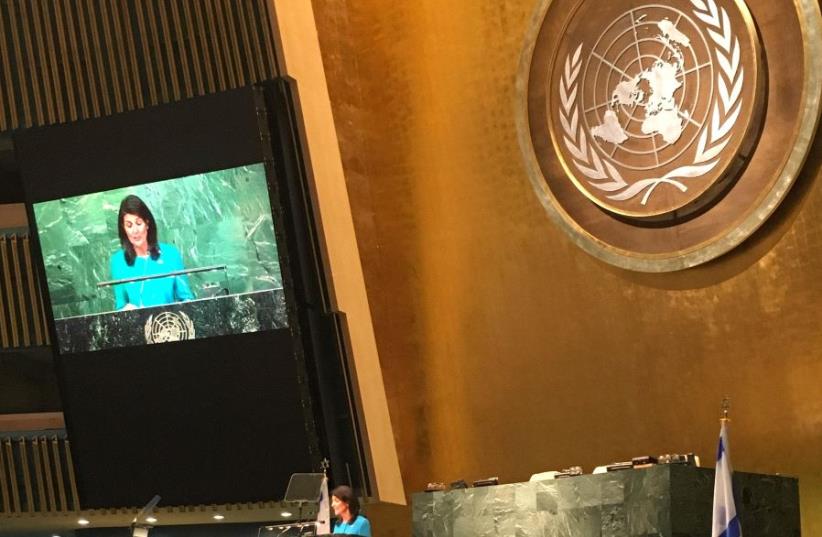 US Ambassador to the UN Nikki Haley speaking at anti-BDS summit
(photo credit: DANIELLE ZIRI)
Advertisement
With legal battles over the constitutionality of laws combating the Boycott Divestment and Sanctions campaign in several US states in high gear, the question is what the state of play will look like in 2019.Around half of the US’s 50 states have anti-BDS laws, which in various ways prohibit granting state contracts to companies which boycott Israel.There are also efforts to pass a federal anti-BDS law, though those efforts are at the earliest stages.However, the American Civil Liberties Union and allied activists started to push back in recent years and by 2018 had already won rulings in both Kansas and Arizona blocking those states from enforcing their anti-BDS laws.According to the ACLU, it takes no position on BDS, but is against anti-BDS laws, calling them an infringement on free speech.It convinced courts in Kansas and Arizona that the laws could be interpreted to penalize individuals for their speech, such as sole proprietors, and the ACLU has initiated parallel lawsuits in Texas and Arkansas.Who is winning the legal battle and where is it likely to go?First, a quick trip back in time.In the early 2000s and certainly by 2005, the BDS campaign was launched to pressure Israel economically to achieve the movement’s founders’ aims.These aims are hotly debated from being framed as helping to achieve peace and equal rights for Palestinians to eliminating Israel in favor of a binational Israeli-Palestinian state or possibly something even more insidious.Over the years, the BDS movement grew in influence and became a red-flag for the pro-Israel movement until June 2015, when South Carolina became the first state to pass an anti-BDS law.
Around two dozen other states eventually followed suit.According to Kohelet Policy Forum legal expert and George Mason Law School Prof. Eugene Kontorovich, those supporting anti-BDS laws have adjusted to the ACLU’s legal tactics.Kontorovich, who many consider the intellectual architect of the anti-BDS laws, told The Jerusalem Post on Tuesday that the courts who ruled against the anti-BDS laws misinterpreted them.Yet, he said that even the objections based on that misinterpretation was easily resolved by a slight amendment.He explained that the anti-BDS laws are only meant to block state contracts for corporations and so that, properly interpreted, they could not be said to infringe on individual’s free speech.Put differently, while people still can promote BDS in states with anti-BDS laws, they just might forego state contracts in the process.If there is any loophole in the laws, which the ACLU told courts could be construed to harm sole proprietors, Kontorovich said the loophole has been closed in Kansas and will soon be closed in Texas.An amendment in Kansas, one on the way in Texas and potentially others, will specifically clarify that the laws only block funding to corporations of 10 or more persons and will raise the cut-off for the amount of funds in question to avoid covering small business owners.Regarding Arizona, Kontorovich is hopeful that more skillful lawyering may get the appeals court to reverse the lower court. If not, an amendment could be considered there as well.He said that the legal proceedings in Arkansas are too early to have gotten to the point of discussing strategy.ACLU staff attorney Brian Hauss acknowledged to the Post that the amendment to the Kansas law ended their current legal challenge in Kansas by permitting their client to work in teacher training without having to sign a certification that she would refrain from BDS activism.However, he said that the ACLU is still very optimistic about its ability to legally challenge anti-BDS laws.He said that simply elevating the funding cut-off limit or the size of the corporation being covered would not solve the basic free speech issue.Rather, Hauss said that the ACLU need only find another corporation, such as a newspaper in Arkansas, which the anti-BDS laws still apply to.At that point, he said the ACLU can cite US case law that corporations have a right to free speech and that government contracts cannot be conditioned on forfeiting First Amendment rights.At the federal level, the BDS movement registered a win earlier in January by getting Congress not to take up a proposed bill. The bill would have essentially directed state courts to approve their state’s anti-BDS laws based on the idea that those laws were consistent with federal policy.This is not the same as a longer-term and more dramatic effort to have Congress bar federal funding from companies boycotting Israel.In any event, the bill ran into the US government shutdown controversy in which nothing passes, regardless of the issue.However, there was vocal opposition to the bill not only from the small number of pro-BDS Congressman, but also from pro-Israel US Senator Diane Feinstein on free speech grounds.After a full survey, it seems that the state of play on anti-BDS legislation in the US is uncertain. Though not a single anti-BDS law has been permanently struck down yet, it seems that for each move one side makes, the other side is preparing its next move.