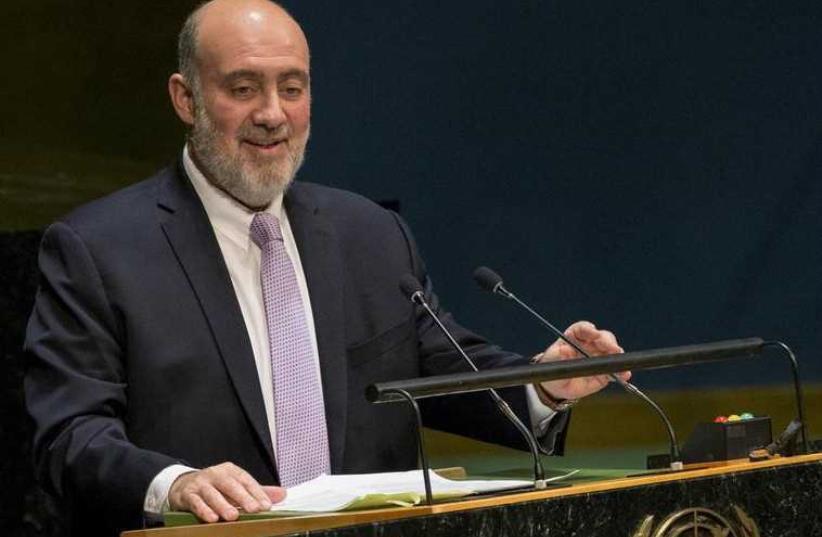 Ron Prosor addresses the United Nations General Assembly in January during a meeting about the rise of anti-Semitism
(photo credit: REUTERS)
Advertisement
UNITED NATIONS - Israel has accused a senior UN official of misconduct in preparing a report that harshly criticized the Israeli army over the 2014 Gaza war while leaving it off a blacklist of states and armed groups that violate children's rights in conflict.The UN Security Council will hold a public debate on Thursday to discuss the latest United Nations report on children and armed conflict.In it, UN Secretary-General Ban Ki-moon said "the unprecedented and unacceptable scale of the impact on children in 2014 raises grave concerns about Israel's compliance with international humanitarian law ... (and) excessive use of force."Although formally presented in Ban's name, the report was prepared by his envoy on children and armed conflict, Leila Zerrougui of Algeria.Israeli UN Ambassador Ron Prosor accused her of "biased conduct against Israel." He also denied Israel had violated international law during the war.In a letter to Ban, seen by Reuters, Prosor voiced "deep concerns regarding the improper conduct - at every working level - of the office of...Zerrougui in the process of drafting and producing the report."More than 2,100 Palestinians, mostly civilians and including 540 children, were killed during last year's 50-day Gaza Strip war between Hamas and Israel, while 67 Israeli soldiers and six civilians in Israel were killed.A UN inquiry found that Israel fired on seven UN schools and killed 44 Palestinians seeking shelter, while Palestinian militants hid weapons and launched attacks from empty UN schools.Prosor said Zerrougui's office "repeatedly refused attempts on our part to provide official evidence and facts."Zerrougui's chief of staff Sharon Riggle said in an email to Reuters Israel had received the standard two weeks to respond, as well as three additional days.She said it was not possible to incorporate all comments from individual governments.According to UN officials, Zerrougui included Israel on a draft blacklist of violators of children's rights, although Ban decided not to include Israel's army on the final blacklist, which names groups like the Taliban and Boko Haram.Prosor said the report disproportionately focused on Israel, even though Iraq, where Islamic State militants control significant territory, had the highest number of child casualties.The report includes 32 paragraphs on Israel, compared with eight on Iraq, 15 on Afghanistan, 18 on Syria and 11 on Darfur.Zerrougui's report did not mention Hamas by name. Several Israeli officials said on condition of anonymity that Israel told Zerrougui's office how Hamas rockets severely damaged Israeli medical centers and schools - details that were not mentioned.The officials also said the human rights groups that helped draft Zerrougui's report were biased against Israel.