Advisory replaces one issued a day after the Istanbul attacks, in place since August 2014, that advised Israelis to refrain only from unnecessary travel to Turkey. 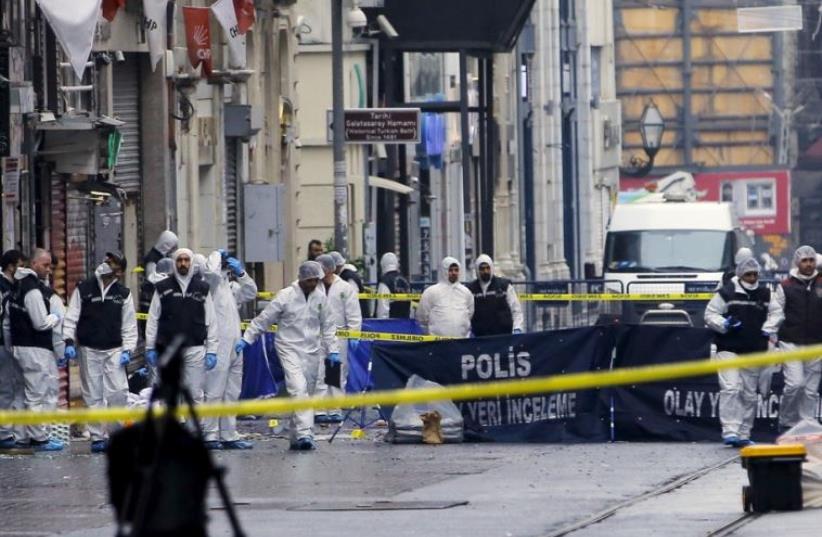 Police forensic experts inspect the area after a suicide bombing in a major shopping and tourist district in central Istanbul
(photo credit: REUTERS)
Advertisement
Israel upgraded its travel advisory regarding Turkey on Monday, recommending that not only should Israelis not travel to the country, but that Israelis already there should leave immediately.The new advisory comes 10 days after three Israelis were among the four people killed in a blast in central Istanbul.The National Security Council’s Counter-Terrorism Bureau issued a statement saying that the existing travel warning has been upgraded from a Level 3 warning of a basic concrete threat, to a Level 2 warning of a high concrete threat.According to a statement issued by the bureau, the Istanbul attack demonstrated again the high level threat to tourist sites in Turkey from Islamic State, as well as the organization’s capability of carrying out attacks. “The terrorist infrastructure in Turkey continues to advance additional attacks against tourist targets – including Israeli tourists – throughout the country,” the statement read.This advisory replaces one issued a day after the Istanbul attacks, that sufficed with advising Israelis to refrain only from unnecessary travel to Turkey.President Recep Tayyip Erdogan’s spokesman, when asked at a briefing about the Israeli advisory, said the move had followed Turkey’s own warnings to its citizens. But he urged countries against playing into the extremists’ hands, after a series of security alerts from foreign diplomatic missions in Turkey.“One should refrain from moves that lead to the suspension of daily lives, in a way which would be welcomed by the terrorists,” presidential spokesman Ibrahim Kalin said.On Sunday, police in Turkey warned of possible Islamic State attacks against churches and synagogues, according to Turkish media reports. Consulates and embassies also were told to stay on high alert.Last week, Erdogan said the country was facing “one of the biggest and bloodiest terrorist waves in its history.”Defense Minister Moshe Ya’alon described Turkey as “awash in terrorism.” He said the roots of this violence lie in radical Islam, which is “flooding the world.”The most recent blast in Istanbul was the fourth suicide bombing in Turkey this year. Two in Istanbul have been blamed on Islamic State, while two others in Ankara have been claimed by Kurdish fighters.Reuters and JTA contributed to this report.