Israel will not allow its citizens to enter Egypt through the crossing, however Israeli citizens will be permitted to return to the country via the Taba crossing. 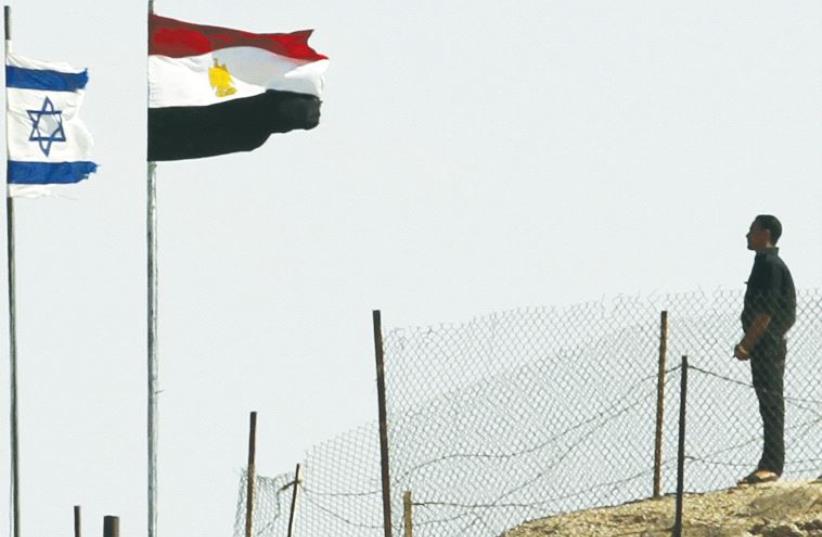 EGYPTIAN AND ISRAELI flags flutter next to each other at the Taba border crossing.
(photo credit: REUTERS)
Advertisement
Israel on Monday decided to close its side of the Taba Border Crossing between Eilat and Egypt in light of concerns of terrorist attacks targeting tourists, including Israelis, in the volatile Sinai Peninsula.Following security assessments, as of Monday and at least until April 18, Israel will not allow its citizens to enter Egypt through the crossing, however Israeli citizens will be permitted to return to the country via the Taba crossing.The Prime Minister's Office announced the move in a statement that cited "the intensifying activities" of Islamic State-affiliated terrorists in the Sinai region in recent months.The government therefore urged all Israelis currently in the Sinai Peninsula to immediately leave the area and return to Israel.
Israel ups security level along Egypt"s Sinai border
Israelis have long-flocked in holiday exodus to the Sinai region during the Jewish celebration of Passover, which begins Monday at sundown.Monday's decision came the day after the National Security Council’s Counter-Terrorism Bureau re-upped its already stringent warning against travel to Sinai in the wake of bombing attacks against Coptic Christians in Egypt that claimed more than 40 lives and left more than 100 wounded. Islamic State claimed responsibility for Sunday’s attack.The standing warning – not to go to Sinai and to leave immediately if already there – was reiterated at a special meeting of the bureau, reflecting a severe increase in the immediate threat facing Israelis there.Sunday’s attacks in Egypt reflects the capabilities of ISIS, which in recent months have intensified its activities in Sinai, a statement from the bureau read. Prime Minister Benjamin Netanyahu said the world must unite and fight terrorism everywhere.He sent a message offering condolences to the families of victims, and wished a speedy recovery to those who were wounded in the attacks.  Herb Keinon contributed to this report.