Israel-German ministerial meetings back on after year hiatus

Disagreements over settlement policy had prevented diplomatic meetings from happening between Israeli and German ministers. 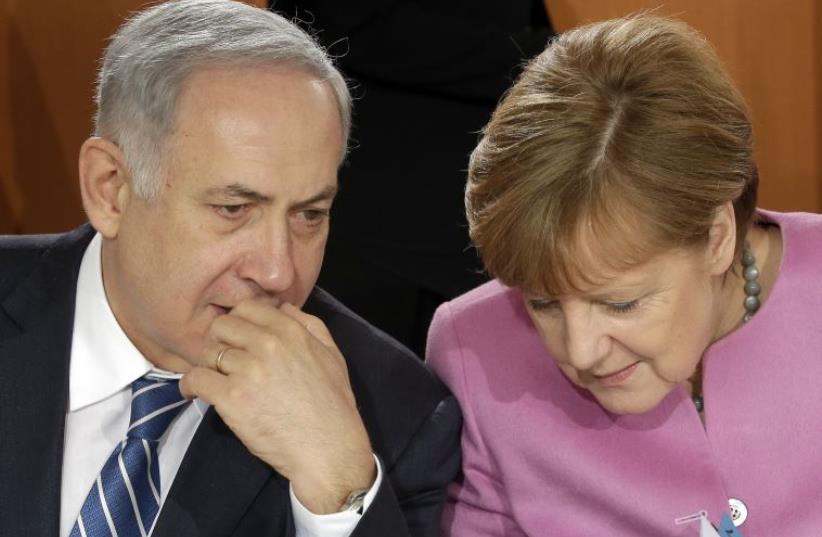 German Chancellor Angela Merkel and Israeli Prime Minister Benjamin Netanyahu speak before a lunch as part of a one day governmental meeting at the Chancellery in Berlin, Germany, February 16, 2016
(photo credit: REUTERS)
Advertisement
A long-delayed government- to-government meeting between Israel and Germany – generally an annual event that showcases the closeness of ties between the countries – will take place in the coming months, Prime Minister Benjamin Netanyahu said on Tuesday after a phone call with Chancellor Angela Merkel.Netanyahu called Merkel to congratulate her on her new government, and phoned Foreign Minister Heiko Maas to congratulate him.The formation of the government comes some six months after the election, and again pairs Merkel’s conservatives with the Social Democrats.A statement put out by Netanyahu said that he and Merkel agreed that the government- to-government meeting will be held “in the coming months” in Jerusalem.The meeting, which brings together ministers from both countries, was canceled last year, apparently because of German displeasure with Israel’s settlement policies and its position on the diplomatic process with the Palestinians.The new coalition agreement makes Berlin’s stand on the settlements clear, and for the first time it stated that Israel’s policy “contradicts applicable international law” and is not supported by Germany because it “impedes a two-state solution.”Maas, from the Social Democrats, will – according to Netanyahu’s office – come to Israel even before the government- to-government meeting.Maas, justice minister in the previous cabinet, replaces Sigmar Gabriel, with whom Netanyahu had an especially fraught relationship. The prime minister refused to host him in 2017 after Gabriel insisted on meeting with the far-left NGO Breaking the Silence.Mass, in his inaugural speech last week, said: “Personally, the German-Israeli history isn’t just one of historical responsibility, but it also represents a deep motivation in my political decision- making.”He said the Holocaust was a primary motivation for his going into politics. “I didn’t go into politics out of respect for [former Social Democrat chancellor] Willy Brandt or the peace movement,” Maas said. “I went into politics because of Auschwitz.””