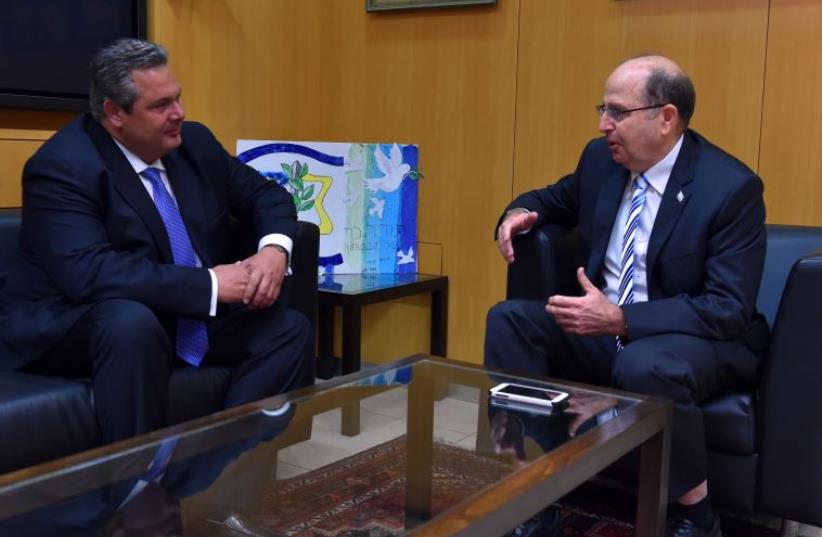 Greek Defense Minister Panos Kammenos visits his Israeli counterpart Moshe Ya'alon at the Defense Ministry
(photo credit: ARIEL HERMONI / DEFENSE MINISTRY)
Advertisement
Israel and Greece signed a status of forces accord in Tel Aviv on Sunday that offers legal defense to both militaries while training in the other’s country.Greek Defense Minister Panos Kammenos visited his Israeli counterpart Moshe Ya’alon at the Defense Ministry, where the accord was signed. Israel has only ever signed a similar accord with the US.During their meeting, Kammenos and Ya’alon discussed continued bilateral defense ties, and the latest regional situation.“We very much appreciate your visit here during a difficult period for Greece. This underlines the importance of relations between the countries,” Ya’alon said. “We wish the Greek people and Greece itself success in its effort to overcome the economic challenge. We pray for that since we believe Greece is a very important country, with a history and a contribution to the history of humanity.”Ya’alon paid tribute to joint training between the IDF and Greek military within Greece, adding that both countries have shared interests, and both are dealing with the impact of the agreement between world powers and Iran over its nuclear program.“We perceive Iran as a generator and central catalyst to regional insecurity through its support to terrorist elements in the Middle East, particularly Shi’ite terrorism, though not only Shi’ite. And of course, the Iranian ambition for regional hegemony leads the regime in Tehran to undermine the stability of [other] regimes, which creates a challenge for all of us,” Ya’alon said.Global terrorism is “also developing in our area, and is influencing the security situation in Europe as well. Terrorism is terrorism is terrorism. Today it is directed against someone else, and tomorrow it reaches you,” he added.Kammenos said the “Greek people are very close to the people in Israel,” adding that military bilateral relations are good, and that both countries will continue to build on them through joint training. Terror - ism and jihad, he added, are not just in the Middle East, but are also present in the Balkans and Europe.Greece is within range of Iranian missiles, he added. “If one Iranian missile makes its way to the Mediterranean, this could be the end of states in this region,” the Greek defense minister said.