New system will bring sea-based firepower into the heart of any future conflict. 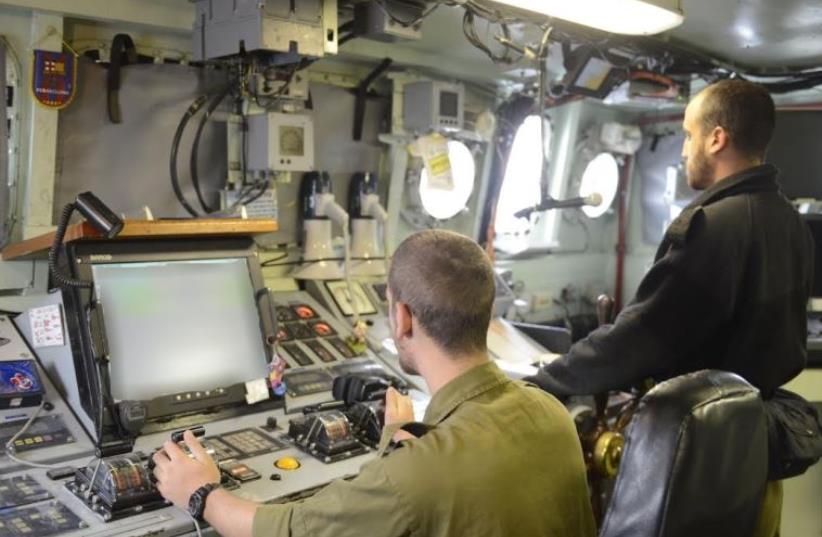 Photos of personnel from the navy's C4i Division on Tuesday
(photo credit: IDF SPOKESMAN’S UNIT)
Advertisement
The Israel Navy is developing a new command and control system for its vessels, which will enable it to strike targets on shore from the sea in less time, and play a larger part in air defense, a senior source told The Jerusalem Post this week.The source, from the navy’s C4i (Command and Control, Communications, Computers and Intelligence Unit), said the new system, will replace the current one, which has seen six upgrades since being introduced in the 1990s.The new system will become operational on the four Sa’ar 6 warships the navy will receive from 2017 to 2019. It will also be extended to all vessels. The Sa’ar 6 ships will be the largest in the navy and will help it protect offshore gas drilling rigs in the Exclusive Economic Zone. The arrival of the ships is also a growth engine for research, development and funding for the C4i Branch, the source said.“This is a historical era for us,” the source said, adding, “It is an opportunity to refresh and develop new systems. We are in the C4i era. Everything is connected to networks.Interconnectivity between military branches is the key. There is a single information flow.”Made up of young engineers and programmers, the navy’s relatively small C4i branch is developing the system in-house. Components of it will become operational within a year, and it will be operational in three years, the officer said.“When online, the system will process “much more information,” handle more weapons, electronic warfare defenses, detection of threats and radar feeds,” he stated.“The new command and control network will also link up navy missile ships, patrol boats, and submarines to the rest of the military in ways not possible before,” he said.“We are developing a version that can talk to the whole military, to the air force and the ground forces.We are not there yet,” he said.That means that sea-based weapons, like guided missiles and longrange canons, will become an intrinsic element in the IDF’s firepower.“We will reach full integration much faster,” the source said.Referring to the participation of navy vessels in striking Hamas targets in Gaza during Operation Protective Edge in 2014, he said, “What we had then was the opening stage.We will know how to provide solutions for every target on shore.”The network will also enable the navy to better link up its Barak 8 air defense systems and radar which will be on the Sa’ar 6 missile ships and is currently on board the INS Lahav Sa’ar 5 missile ship, to the air force’s national air defense systems.“We are already today, working on this integration,” the source said.The navy’s C4i Branch is responsible for building up cyber defenses, and protecting weapons systems from enemy hacking capabilities. A navy missile ship has more weapons systems on board than any other military platform, meaning that it requires more cyber defenses, the source explained.“Once, a missile ship was an island, cut off from the world. Now, it’s all part of the network,” he said.“Sure, our enemies want to arrive [at the position of being to hack the navy’s systems]. Our goal is to prevent this. We are developing increasing numbers of capabilities to do this,” he said, without going into details.The new command and control system will enable unmanned sea vehicles (USV) to play bigger roles in future naval operations, thanks to long-range remote capabilities.In addition to the currently serving Rafael-made protector, the navy has purchased a new type of USV, and it will be able to carry more payloads on board, the source said, meaning more missions can be conducted without endangering sailors, and the navy will become more flexible.“Many of the young programmers and engineers could be working in hi-tech firms and making a lot of money,” the source said. “But they have chosen to sign on for six years of service instead.”“They are filled with Zionism and the motivation to develop systems that will provide defenses,” he said.“The systems they are working on, and their complexity, do not exist in many other places. This is what puts the wind in their sails.”