WIRED reports that Israel will be alone among the Pentagon’s customers that will be permitted to outfit the warplane with its own technological enhancements. 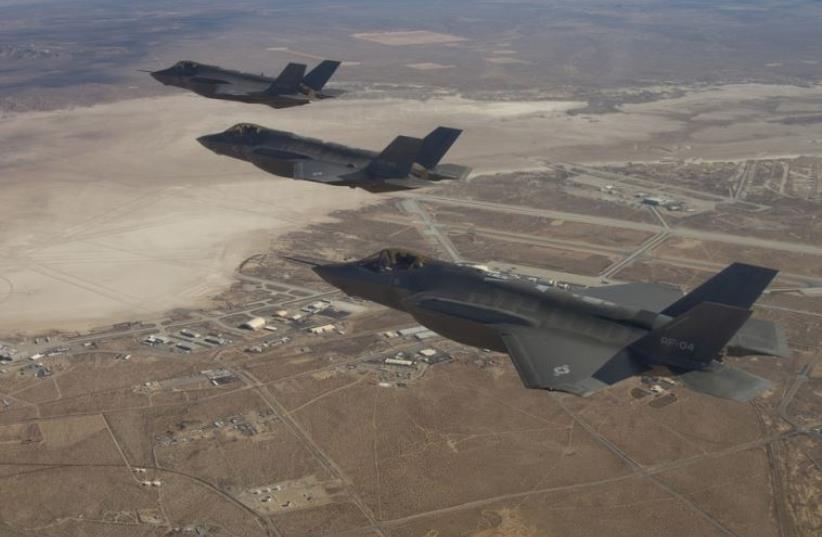 Three F-35 Joint Strike Fighters (rear to front) AF-2, AF-3 and AF-4, can be seen flying over Edwards Air Force Base
(photo credit: REUTERS)
Advertisement
Israel is unique among America’s allies in that it is the only country on earth that enjoys special dispensation to install modifications on US-made military hardware, according to an Internet report.The tech magazine WIRED reported this week that not only will Israel be the first US ally to receive the brand-new stealth F-35 Lightning II Joint Strike Fighter jet, but it will be alone among the Pentagon’s customers that will be permitted to outfit the warplane with its own technological enhancements.The first Lockheed Martin F-35 stealth fighter jet, due to be delivered to Israel in December, has entered an advanced production stage.Jeff Babione, head of the F-35 program at Lockheed Martin, said the plane would upgrade Israel’s tactical and strategic capabilities, and strengthen relations between the company and the IAF, Defense Ministry, and Israeli defense industries for many decades to come.Israel has purchased 33 F-35A fighters jets at an average cost of $110 million per aircraft. The first two aircraft are due to arrive at the Negev’s Nevatim airbase in December this year, and the air force is preparing to integrate them into its operations.According to WIRED, Israel will be permitted to install “customized software and weapons” while also allowing the Israeli Air Force to service the planes independently.The article states that Israel “gets a pass” because of its successful track record with technological enhancements of American-made weaponry, particularly the F-16 and F-15 model fighter jets.Israel’s defense industries sell many of these enhancements to the US, including weapons systems, sensors, and communications gear.Israel’s geopolitical situation in the volatile Middle East also accounts for Washington’s allowing for greater leeway.“When you might go to war at any moment, the argument goes, you can’t have your best hardware go out of service for weeks at a time for checkouts that can take just a few days on your own turf,” the magazine reported. “What helps Israel helps the United States–and the F-35 will give Israel an overall airpower advantage that could last decades.”Yaakov Lappin contributed to this report.