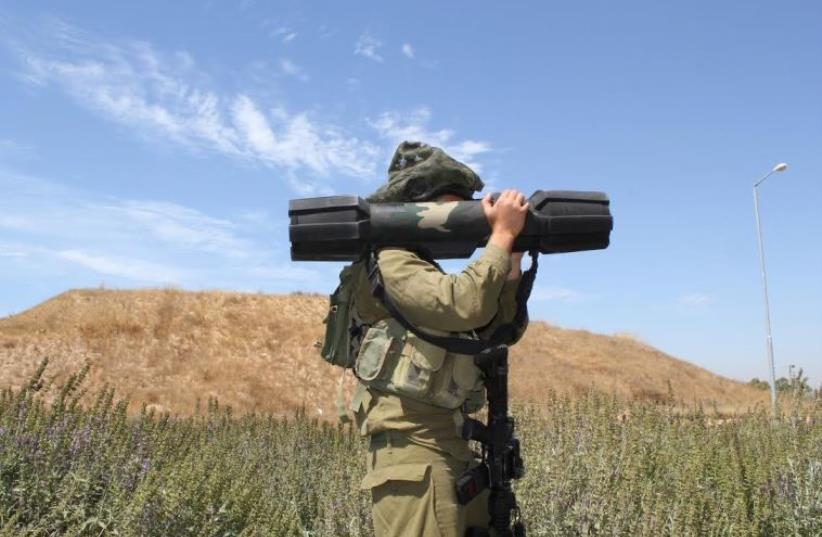 Rafael guided missile
(photo credit: RAFAEL ADVANCED DEFENSE SYSTEMS)
Advertisement
Within the ranks of the IDF ground forces, and in armies around the world, Rafael’s Spike family of guided missiles are playing a central role in surface-to-surface strike capabilities.This week, the missiles arrived in France, as the defense company placed them and other flagship products on display at the Eurosatory arms show now under way at the Paris Nord Villepinte Exhibition Center.The company’s Spike missiles can be fired from a shoulder-held launcher, a remote controlled towed launcher, or a range of other platforms. Guided by an electro-optical navigational system, the missiles are in IDF service, and can strike targets from between 1.5 to 30 kilometers, giving the IDF an accurate and instant firepower capability.More than 25 countries have purchased Spike-type missiles thus far. Collectively, they have acquiring some 24,000 missiles. One member of the Spike family, Spike SR (shortrange), is specifically designed for urban warfare, and can penetrate buildings and armored vehicles, according to Rafael.It said on Monday that the missile’s flight range has recently been increased to 1,500 meters.Rafael also placed Iron Dome, as well as its sea-based variant, C-Dome, on display. The Iron Dome air defense system has intercepted more than 1,500 projectiles fired from Gaza in recent years. Rafael set up its Drone Dome system for visitors to see. That system prevents hostile mini drones from approaching sensitive facilities.Rafael’s Trophy active protection system, which has been installed on board Israeli tanks and armored personnel carriers, is also present at the Paris arms show.Trophy intercepts armor-piercing anti-tank missiles and RPGs. It was used extensively during the 2014 Operation Protective Edge in Gaza, saving the lives of tank crews.In Israel, it is currently installed on board Merkava MK 4 tanks, and Namer-type APCs that ferry IDF infantry units across battle zones.