Israel searches for Or Asraf, its last unaccounted for citizen in Nepal

22-year-old Or Asraf was last seen on trek in Langtang area when massive earthquake struck. 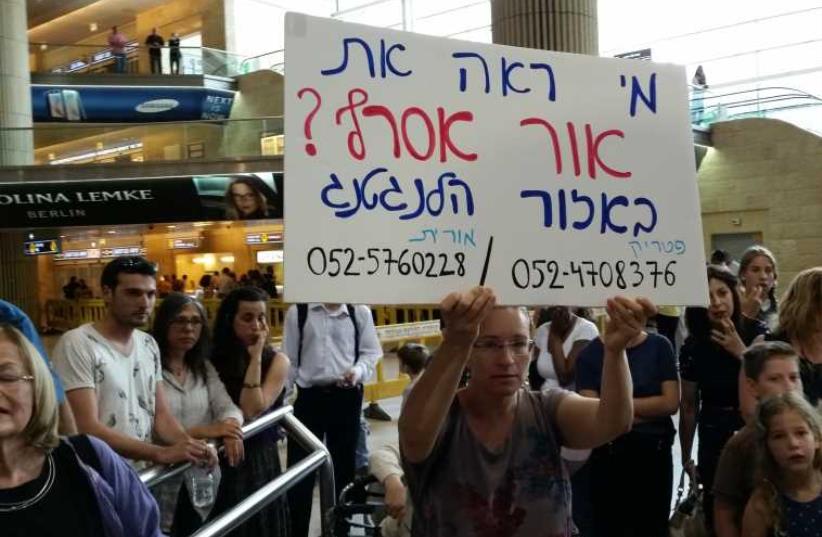 At Ben-Gurion Airport, Orit Asraf holds up a sign asking for information on her son who is missing in Nepal
(photo credit: BEN HARTMAN)
Advertisement
Israel has made contact with all but one of its citizens who were in Nepal at the time that a 7.9 earthquake hit the Himalayan country over the weekend, the Foreign Ministry announced on Wednesday.The missing Israeli is Or Asraf, 22, of Lahavim, according to the Foreign Ministry.In addition, there are 40 Israelis whose identity and location are known that still must be rescued.Asraf was on a post-army trip in the Langtang region of Nepal when the devastating quake that has killed more than 5,000 people struck.Or's parents, Orit and Patrick, from Lahavim, near Beersheba, stood in the arrivals gate with a sign asking if anyone had seen their son at Ben-Gurion Airport on Tuesday as Israelis rescued from Nepal arrived to be greeted by their families.They stopped Israelis coming through the gate asking them one by one if they had seen Asraf, interrupting the celebrations for a moment to chase down any shred of news about their son.They last heard from Or on Friday, when he told them that he was leaving on Sunday to start a trek in the Langtang region. Since then his satellite phone has been off, and they haven’t been able to get through.Patrick said his son was on his post-army trip, and that he left for Thailand in December after he fought – and was wounded – in Gaza in Operation Protective Edge with the Golani Brigade’s elite Egoz Reconnaissance Unit.On Tuesday evening, Patrick said they had heard a lot from backpackers who had seen Or in the week before the earthquake, but no one had seen or heard from him since then.Looking around the arrivals gate on Tuesday, Orit looked at the celebrating families all around her, and hoped for the best.“This looks like fun for them,” she said, before asking more survivors if they knew anything about her son. Over the past two days, 338 Israelis and 25 infants born to surrogate Nepalese mothers have arrived home from Nepal. The bulk of the survivors flew out of Kathmandu on an El Al jumbo jet that landed at Ben-Gurion Airport around noon on Tuesday.After their departure, Israel turned its focus to rescuing the trapped trekkers and offering humanitarian assistance to the Nepalese, who are struggling to treat more than 9,000 victims. At least 5,000 people have died in the quake and that number is expected to double as rescuers – including Israeli teams – continue to sift through the rubble.Prime Minister Sushil Koirala told Reuters the death toll could reach 10,000, as information on damage from far-flung villages and towns has yet to come in.Israel’s “top priority is to locate and extricate Israelis in distress and to help them return safely to Israel,” Prime Minister Benjamin Netanyahu said as he held high-level consultations in his Jerusalem office to assess the situation.Tovah Lazaroff contributed to this report.