Lilian Rosengarten who is a member of the International Anti-Zionist network and accused Israel of “ethnic cleansing,” “racism” and “apartheid,” spoke in a Sparkasse bank office on Sunday. 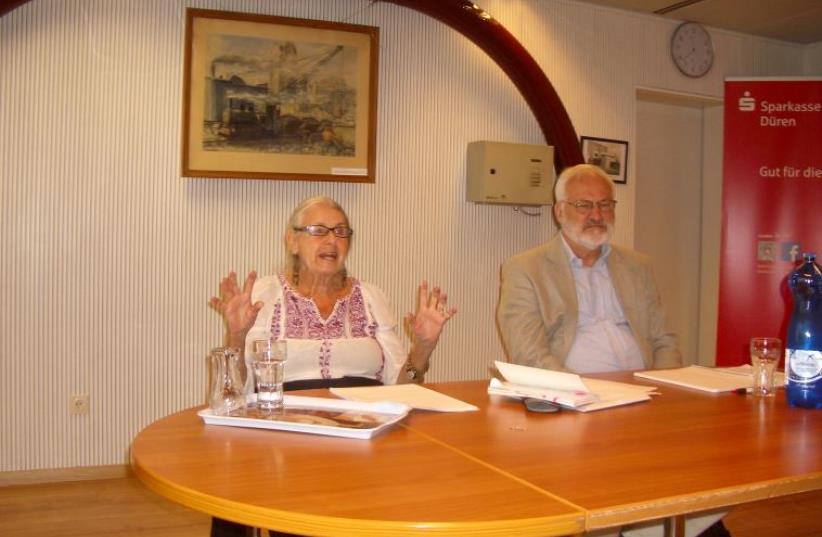 Lillian Rosengarten delivering talk in Düren
(photo credit: Courtesy)
Advertisement
BERLIN – Israel’s embassy in Berlin sharply criticized on Tuesday Germany’s Sparkasse savings bank network – and various NGOs – for allowing an opponent of the existence of Israel, who has likened the Jewish state to the Third Reich, to deliver a talk in its office space titled “Jew against Zionism.”“We regret that certain organizations provide a platform for hatred. It is important and would have been beneficial if institutions would have double-checked before allowing their resources to be used as platforms to spread hatred. Actions are being taken,” the embassy told The Jerusalem Post.Lilian Rosengarten, an activist from New York, spoke on Sunday in a Sparkasse office of the town of Düren, near Aachen. She is a member of the International Anti-Zionist network and accused Israel on the Düren municipal museum’s website of “ethnic cleansing,” “racism” and “apartheid.”“Zionism has been successful in activating a growth in anti-Semitism,” she said.The Darmstädter Echo, a regional paper in the city of Darmstadt, reported that a Protestant community pulled the plug on a talk by Rosengarten scheduled for September 2 because in the past she likened Israel to the Hitler movement.Hildegard Förster-Heldmann, a Green Party politician who heads the Darmstadt municipal cultural affairs committee, said, “A comparison between Israel and Nazi Germany is absurd, disrespects the descendants of the Nazi victims and belittles the criminality of Nazi Germany.”Rosengarten’s talk in Darmstadt was relocated to the Hoffart Theater. She is conducting a Germany-wide speaking series.She signed a 2014 Huffington Post petition supporting a boycott of Israel and called for “the complete dismantling of Israel’s apartheid regime, throughout historic Palestine – from the River to the Sea.” Rosengarten authored an article titled “Zionist Israel’s Final Solution for Gaza” on the website Intifada: Voice of Palestine.Dirk Hürtgen, a spokesman for Sparkasse, wrote the Post by email that the “Sparkasse Düren supports the Düren municipal museum [by providing it space] because engaged citizens in Düren seek to preserve the history and development of Düren and the inhuman events of the Second World War.”Sparkasse “could not establish that anti-Semitic thoughts were expressed in connection with the Düren municipal museum,” Hürtgen said. “We note that Sparkasse Düren always refrains from intervening in the projects which it sponsors as regards to content.”He added that the bank will continue to sponsor projects in the museum and will not cancel its contract for the space.A photograph obtained by the Post shows the Sparkasse banner in the room as Rosengarten spoke.Asked on the telephone if he agreed with Rosengarten’s statement that Israel is an apartheid state, Hürtgen said, “I can’t judge that.” He asked “why is it relevant whether anti-Semitism took place” in the room and noted that there are “different opinions.”Efraim Zuroff, the Simon Wiesenthal Center’s chief Nazi-hunter and head of its Jerusalem office, told the Post the role of organizations involved in supporting Rosengarten “reveals a dismal ignorance of reality in the Middle East, and their reluctance to identify anti-Semitism paves the way for attacks on Israel that are groundless.” The fact the problem has cropped up in Germany is particularly infuriating given the past, he said. The people at Sparkasse “should know better.”The Ostfriesen paper wrote earlier this year about an exhibit addressing the banking network’s role under the Third Reich, saying that “Sparkasse loyally served the Nazi regime.”Zuroff said there is “legitimate criticism of the State of Israel, and totally unfair attacks on the State of Israel that stem from anti-Semitism.”Dr. Robert Neugröschel, the head of the 1,000-member Jewish community in greater Aachen, which includes Düren, told the Post on Saturday that the Rosengarten talk is a “disgrace and of course anti-Semitic.”Jutta Wagemann, a spokeswoman for Josef Schuster, the head of Germany’s Central Council of Jews in Germany, wrote the Post by email, “I believe Mr. Schuster has nothing to add to the statements of the representatives of the Jewish community in Aachen.”Prof. Gerald Steinberg, the head of the Jerusalem-based NGO Monitor, told the Post on Tuesday: “This speaking tour is yet another moral stain on Germany, and specifically for the sponsors. Catholic NGOs that exploit a fringe Jewish anti-Zionist to promote hate for Israel are shamefully reviving theological anti-Semitism in Germany. And other NGO sponsors, including the Israel-based ICAHD [the Israeli Committee Against House Demolitions], are contributing to this hatred.”Rosengarten is slated to speak in Berlin, Frankfurt, Bremen, Hanover, Heidelberg, Hagen and Gissen. The German-Arab Society (DAG) has advertised her talk against Zionism on its homepage. Harald Moritz Bock, the society’s general secretary, told the Post by email that Rosengarten’s talk was not anti-Semitic. She does not talk about “resentments against Jews, rather a lot more about the great sadness that Jews themselves use such methods,” he said.The German-Arab society will not remove the advertisement on its homepage for Rosengarten because “the DAG does not engage in censorship,” Bock said. He said there are no comparisons on the DAG’s webpage between Israel and Nazi Germany.Bock said he couldn’t find any comparisons between Israel and Nazi Germany by Rosengarten in the Internet. Rosengarten has a right to express her views, he said.After the Post sent him the article showing Rosengarten’s Israel parallel with Nazi Germany, he declined to respond specifically to the comparison.Steinberg said," there is no excuse for the role of the German-Arab Friendship society in promoting this form of hate. The use of Rosengarten, whose obscene comparison between Israel with Nazi Germany, is a form of Holocaust denial. "