According to the Ministry of Health 823,264 Israeli citizens are registered organ donors as of 2015, which is only 14% of the country’s adult population. 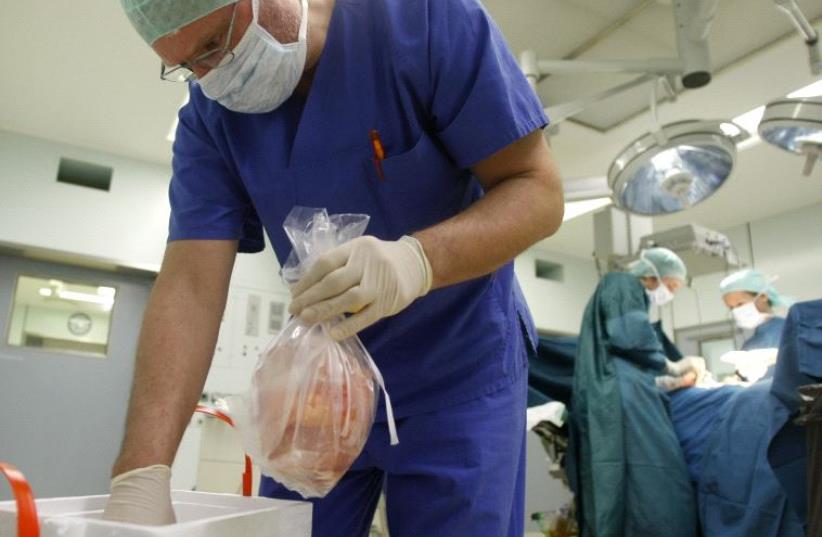 A surgeon puts a plastic bag containing a kidney into a box after an operation to extract organs.
(photo credit: REUTERS)
Advertisement
Police arrested three suspects on Tuesday for allegedly operating a highly profitable organ trafficking network.According to a statement by the Lahav 433 special investigations unit, the suspects allegedly exploited low-income Israelis in need of money and convinced them to sell one of their kidneys. The suspects then located Israelis in need of a kidney and coordinated transplant operations in Turkey, pocketing hundreds of thousands of shekels in profit.“According to the suspicions, three suspects conspired and established an organ trafficking network, with a clear division of roles, locating and recruiting organ sellers and buyers to complete the procedure, and all this for the illegal collection of money,” the police said in a statement.One of the suspects, Dr. Michael Zis, had his medical license suspended about a year ago.Zis fled Israel for Ukraine in 2007, according to Yedioth Ahronot, after being suspected of involvement in illegal kidney transplant operations, however he was extradited back to Israel in 2009.Speaking to The Jerusalem Post on Wednesday a Lahav spokesman said that police have collected evidence against the suspects in all aspects of the trafficking process and in a large number of cases, which were still in process when the suspects were arrested. He added that police are seeking to combat organ trafficking in Israel, but added that they believe organ trafficking is the result of a few bad actors. “This is the same doctor that was involved in the last case, the same person. This is not a phenomenon. We are not in a third world country,” he said.Police raided the suspects’ homes and said they found additional evidence connecting them to the crime. The arrests came after police conducted a months-long undercover investigation into the alleged trafficking ring.According to a 2014 New York Times article, Israelis play a disproportionate role in the international organ trafficking industry. The story attributed Israel’s large role to Israel’s low organ donation rate, which is linked to religious considerations which prevent many Israelis from organ donation.According to the Ministry of Health, 823,264 Israeli citizens are registered organ donors as of 2015, which is only 14% of the country’s adult population. This compares to around 20%-40% organ donor rates in most European countries, according to European Union statistics.The Israeli government sought to increase donor rates with a 2012 law that gives organ donors priority over non-organ donors if they need a transplant. A 2010 law also provides compensation for living organ donors. Both laws appear to have led to an increase in organ donor rates which was less than 10% in 2010.