Over 1.5 million people are expected to visit military cemeteries spread across the country on Memorial Day.

By ANNA AHRONHEIM
APRIL 30, 2017 12:53
Prime Minister Benjamin Netanyahu at an inauguration ceremony for the national Hall of Remembrance for fallen soldiers on Mount Herzl in Jerusalem, April 30, 2017 (credit: GPO)
Advertisement
Over the past year, another 97 soldiers and officers serving in Israel’s security forces, including 37 wounded veterans who succumbed to their wounds, have joined the ranks of Israel’s fallen, according to numbers released by the Defense Ministry ahead of Memorial Day for the Fallen Soldiers of Israel and Victims of Terrorism, which begins Sunday at 8 p.m. with a siren that will be heard throughout the country.Since the beginning of the modern Jewish movement in the Land of Israel in 1860, a total of 23,544 have died defending the State of Israel, including those fighting with pre-state defense forces, IDF soldiers, the Shin Bet (Israel Security Agency), the Mossad, police officers, and officers of Israel’s Prisons Services.According to the National Insurance Institute, there are a total of 9,157 bereaved parents in Israel, thousands of bereaved siblings, 4,881 widows and 1,843 orphans under the age of 30. In addition, 3,117 civilians have been killed in hostile acts such as terror attacks since the birth of the the State of Israel, including 122 foreign nationals and 100 Israelis killed in attacks abroad.In a letter to IDF soldiers and commanders, IDF chief of staff Lt. Gen. Gadi Eisenkot wrote that "in their death, the fallen have left us with a legacy and a will to be the defenders of the people and to hold the sword for its freedom in its land.""With the legacy of the fallen, we are charged to preserve the values that they adopted in their lives—courage and mental fortitude, responsibility and dedication, a sense of mission and belief in the righteousness of the way. The values that beat in the hearts of the fallen are the secret to the strength of the Israel Defense Force to this very day. The IDF spirit is the common language shared by those who serve."Eisenkot called on soldiers to lend a hand to the bereaved families of the fallen, writing that "in their death, the fallen have charged us with one more thing: To stand by their families and accompany them on the journey of life after loss, a journey that began on the day the light of their life was put out. We must continue to support them throughout the year to ease their pain as much as possible.”"Today, we will also remember the IDF's missing soldiers and the fallen soldiers whose place of burial is unknown, and we will pray that our children return to their own land."Over 1.5 million people are expected to visit military cemeteries spread across the country on Memorial Day. 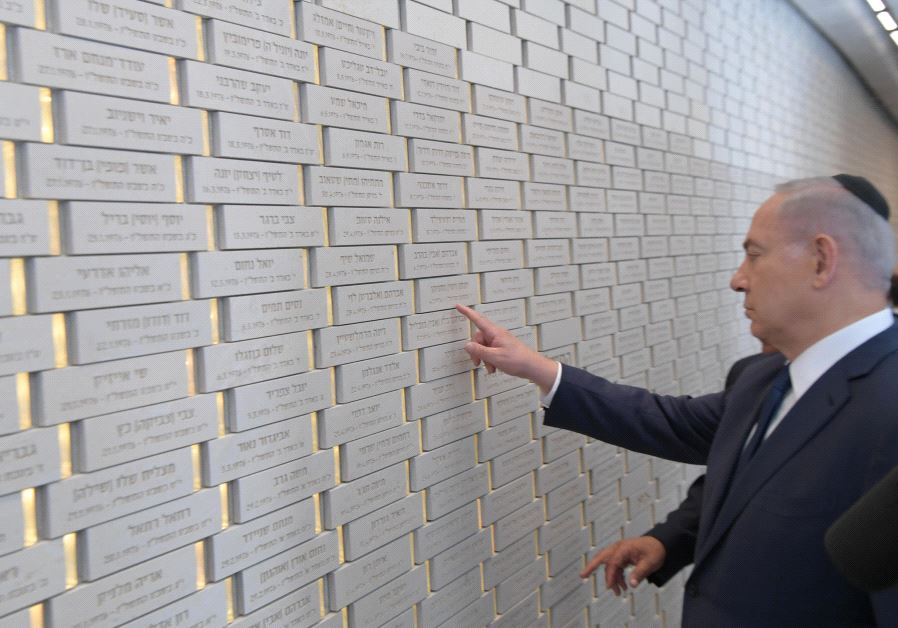 Prime Minister Benjamin Netanyahu at an inauguration ceremony for the national Hall of Remembrance for fallen soldiers on Mount Herzl in Jerusalem, April 30, 2017 (GPO/Amos Ben-Gershon)On Sunday at 10 a.m., President Reuven Rivlin inaugurated the the newly constructed national Hall of Remembrance for fallen soldiers on Mount Herzl in Jerusalem. Prime Minister Benjamin Netanyahu, Defense Minister Avigdor Liberman and other senior defense officials were present.The official opening ceremony for Memorial Day will be held at the Yad Labanim memorial in Jerusalem at 4 p.m., and at 8 p.m. a one-minute long siren will sound. The lighting of the memorial flame will take place at the Western Wall Plaza in Jerusalem’s Old City following the siren with President Reuven Rivlin and Gadi Eisenkot in attendance. On Monday at 11 a.m., a two-minute-long siren will mark the official memorial ceremonies which will be held around the country, and at 1 p.m. the official ceremony to honor those killed in hostile acts will take place.Memorial Day will finish at 8 p.m. on Monday evening with the torch lighting ceremony on Mount Herzl which will mark the opening of Israel's 69th Independence Day celebrations.