MDA teams transport 18 people wounded in Gaza to Tel Aviv where they boarded Turkish aircraft that flew them to Ankara for treatment. 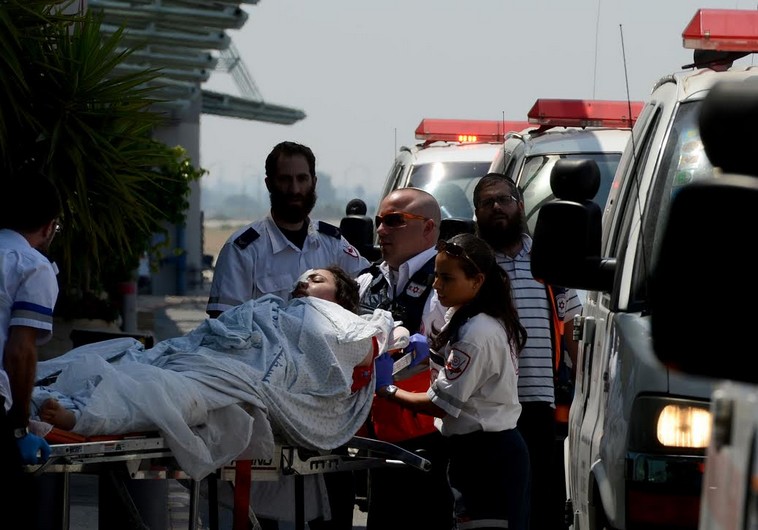 Israel in cooperation with Turkey transported 18 wounded Palestinians from Gaza to Ben-Gurion Airport Wednesday where they were medically evacuated to Ankara, Israeli and Palestinian officials said.A Palestinian Health Ministry spokesman said the 18 were wounded during the recent conflict in Gaza.According to the Government Press Office, one of the wounded was in serious condition, four were in moderate condition and 13 sustained light injuries.As they passed through the Erez crossing from Gaza, the injured were met by a series of Israeli ambulances. The ambulances transported the wounded to Ben-Gurion Airport in Tel Aviv, where a Turkish Air Force aircraft waited for them on the tarmac.The imitative was taken alongside the framework of Israel's ongoing efforts to transfer the sick and wounded from Gaza to Israeli hospitals, the GPO said in a statement. Turkish officials said they planned to bring in around 200 wounded in the first stage of a plan to transport wounded, and would hold further talks with Israel and Egypt - which has acted as a mediator in the conflict - to agree more flights.On Monday  the first group of wounded Palestinians from the Gaza Strip arrived in the Turkish capital after being flown in for medical treatment.Turkey said last week it was seeking Israeli and Egyptian agreement for an air corridor to provide humanitarian aid to Gaza after a month of bloodshed that has killed 1,910 Palestinians and 67 Israelis.Turkey president-elect Tayyip Erdogan announced the launch of the air corridor in his first speech after winning Sunday's presidential election.Pro-Palestinian sentiment runs high in mostly Sunni Muslim Turkey, and protesters have repeatedly taken to the streets in recent weeks to demonstrate against Israel's offensive in Gaza.