Trial was designed to see if Israel's Arrow systems, and David's Sling, could link up with American systems. 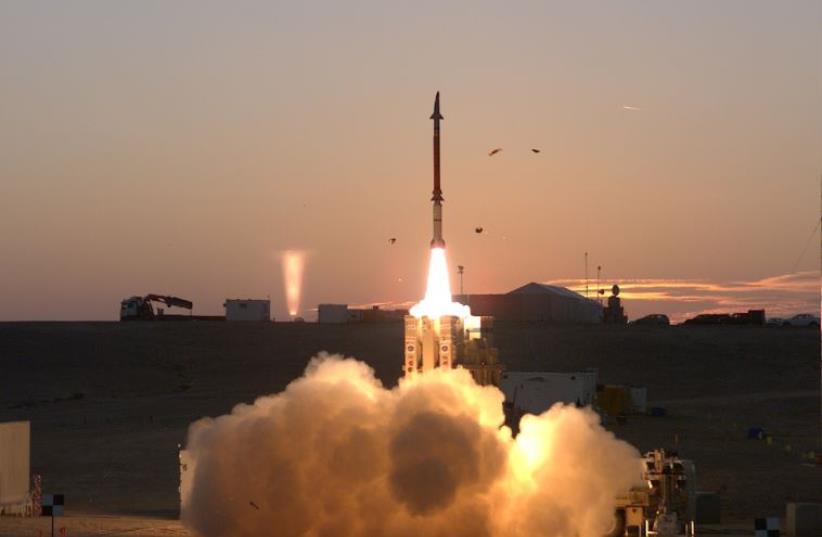 David's Sling
(photo credit: DEFENSE MINISTRY)
Advertisement
In face of the increasing missile threat to Israel, the Defense Ministry and the US Missile Defense Agency completed a test in recent days aimed at ensuring Israeli and American air defense systems can operate cooperatively in a future war.During the trial – the first of its kind – the physical connectivity between the systems was tested.The test involved sites scattered around the United States, Israel and Europe.
David"s Sling successfully test [File]
Elbit Systems EW (Electronic Warfare) and SIGINT (Signals Intelligence) – Elisra led the trial, which was designed to see if Israel’s Arrow and David’s Sling systems could link up with American systems.The trial involved a “central Israeli development site, and sites spread out across the United States,” the Defense Ministry said.Dozens of Israeli and American personnel took part, as did units from the US military’s European Command.The David’s Sling intermediate air defense system is scheduled to go into mass production in the coming months after it was handed over to the air force in recent months.Earlier this year, the US and Israel held a joint air defense exercise.During the Juniper Cobra 2016 exercise, which began in February, the US European Command integrated the command and control systems of the Aegis Combat System, Terminal High Altitude Area Defense and Patriots, while Israel plugged in systems from its Arrow-3, David’s Sling and Iron Dome defenses.Brig.-Gen. Zvika Haimovich, commander of the IAF’s Aerial Defense Division, said at the time: “We will be better prepared after this drill, in the face of a changing reality,” while the US commander of the exercise, Lt.-Gen. Timothy M. Ray, had said the combined ballistic mission exercise improved interoperability by exercising missile defenses.The Defense Ministry and the US Missile Defense Agency handed control of the David’s Sling air defense system over to the IAF on March 1.