The warning appeared in an annual travel advisory guide issued by the Counter-Terrorism Bureau, which is a part of the Prime Minister’s Office. 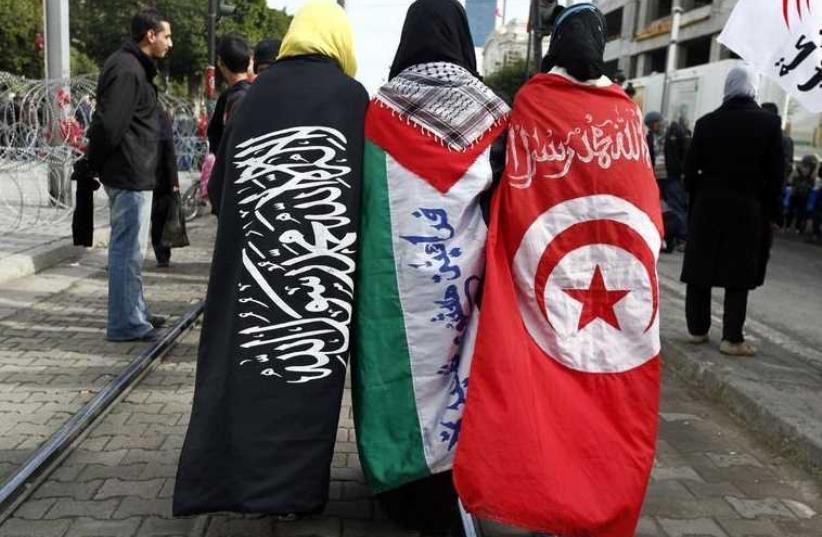 Girls walk the street dressed in (L-R) the Salafi, Palestinian and Tunisian flags during the second anniversary of the Tunisian Revolution in Tunis
(photo credit: REUTERS)
Advertisement
The Counter-Terrorism Bureau issued a travel alert on Saturday evening, warning Israelis and Jews to avoid visiting Tunisia following "updated information" on terror plots, with an emphasis on the Lag Baomer holiday which takes place on Thursday.Tunisian Jews, and other Jews visiting the North African country, traditionally celebrate the Hilula festival of Rabbi Shimon Bar Yochai on Lag Baomer.The Counter-Terrorism Bureau said a Level 2 alert, meaning a concrete and high threat is in place, has been issued for the country, adding, "The recommendation is to avoid visiting Tunisia.”In March, the Counter-Terrorism Bureau warned that global jihadi elements likely will seek to carry out additional attacks on Jewish and Israeli targets, particularly in western and northern Europe.The warning appeared in an annual travel advisory guide issued by the Bureau, which is a part of the Prime Minister’s Office.It noted the string of terror attacks in 2014 in Belgium, France, Denmark, Canada and Australia, saying they “raise concerns over additional attacks against Western targets, including Jewish and Israeli targets.”Militant veterans of battlegrounds in Syria and Iraq who return to their countries, and local extremists inspired by terrorist organizations, are behind the threat of more attacks, the advisory, issued ahead of the Pesach holiday, said.The Bureau issued a total of 27 travel alerts, in addition to six enemy states that Israelis are banned by law from visiting, and eight regions that are subject to a variety of advisories. In the March statement, the Bureau noted that Al-Qaida in North Africa poses a threat, and, ahead of Lag Ba’omer, the it named Tunisia as a country that could see additional attacks.